Shirley Knight, the daring actress and darling of Tennessee Williams who received Oscar nominations for her work in her third and fourth films, The Dark at the Top of the Stairs and Sweet Bird of Youth, has died. She was 83.

Knight died Wednesday of natural causes at the home of her daughter, actress Kaitlin Hopkins, in San Marcos, Texas.

Knight was known for taking bold chances during her career — as when she portrayed a promiscuous woman who confronts a young black male (Al Freeman Jr.) on the New York subway in the incendiary 1966 independent film Dutchman (1966) or when she played a pregnant Long Island housewife who gets involved with an ex-football player (James Caan) in The Rain People (1969), a film Francis Ford Coppola wrote just for her.

The Kansas native received a Tony Award in 1976 for her turn as an alcoholic actress who channels Marilyn Monroe in Kennedy’s Children, and she was nominated again in 1997 for portraying the sorrowful wife of a Houston businessman (Rip Torn) in Horton Foote’s Pulitzer Prize-winning The Young Man From Atlanta.

In Delbert Mann’s The Dark at the Top of the Stairs (1960) — an adaptation of another Pulitzer Prize-winning play, this one written by Kansan William Inge and directed on Broadway by Elia Kazan — Knight made her first big splash as Reenie, the conflicted teenage daughter of a laid-off salesman (Robert Preston) and his wife (Dorothy McGuire) in 1920s Oklahoma.

She landed her first supporting actress nom for that, then received another one for her next film, Richard Brooks’ gripping Sweet Bird of Youth (1962), in which she portrayed Heavenly Finley, the daughter of the crooked town boss (Oscar winner Ed Begley) and childhood sweetheart of a Hollywood wannabe, Chance Wayne (Paul Newman). The film was based on a 1959 play by Williams that was directed on Broadway by Kazan as well. 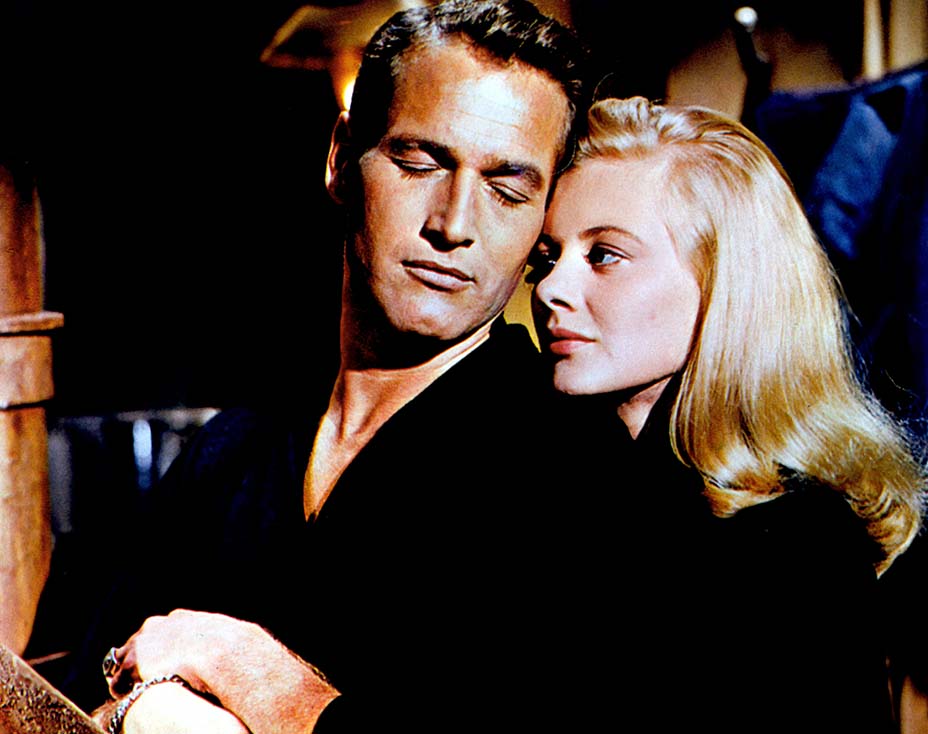 At the height of her powers in 1964, Knight asked for and was granted a release from her contract at Warner Bros. so she could move to New York to study acting with Lee Strasberg at the Actors Studio. “When I was doing Sweet Bird of Youth, Geraldine Page and Paul and the whole cast were so experienced,” she said in 2014. “I felt like there’s something they knew that I didn’t.”

One of her favorite stage personas was Blanche DuBois in A Streetcar Named Desire: “I was absolutely born to play that role,” she said in a 2010 interview for the Classic TV blog. After one performance, she recalled, “Tennessee came backstage and said, ‘Finally, I have my Blanche. My perfect Blanche.'” He then wrote A Lovely Sunday at Creve Coeur for her.

Talking about the actress in a 1982 interview with James Grissom, Williams said: “People talk about talent, but everybody has some talent. Everybody also has a heart. But talent, like one’s heart, is almost always badly or rarely used. You don’t take a talent or a heart out for a walk or an adventure without a great deal of courage, and I look for courage.

“There are talented people — brilliant people — who have courage, and those you want to keep around you … Shirley Knight has incredible courage: She’ll take her talent wherever it needs to go to get the job done well, and she has no fear about sharing it with anyone ready for it. I like daring people, bold people. Shirley is daring and bold.”

She was born on July, 5, 1936, in Goessel, Kansas, the daughter of an oil-company executive. Raised in nearby Mitchell, a town with 13 houses, a two-room schoolhouse and a church, Knight began training at age 11 to be an opera singer.

When director Josh Logan brought Picnic (1956), an adaptation of another Inge play, to film at Sterling Lake, Knight, her sister, brother and mom served as extras for a day on the film, watching William Holden and Kim Novak at work.

After her junior year at Wichita State University, Knight came to Southern California for a six-week summer acting course at the Pasadena Playhouse. That led to her getting a role as a 15-year-old unwed mother opposite Michael Landon in NBC Matinee Theater in 1957.

Knight wasn’t going back to Kansas. She enrolled at UCLA and took acting lessons from Jeff Corey (her classmates included former child stars Robert Blake and Dean Stockwell, Jack Nicholson, Sally Kellerman and Millie Perkins) and while in a play was spotted by Ethel Winant, the famed head of casting at CBS.

“Ethel really was the person who, more than anyone else, championed my career,” she said. “She would put me in everything. Anything she could possibly put me in that was at CBS, she did. She also was responsible for my going with the Kurt Frings Agency. If you don’t know who that is, he was the most important Hollywood agent for women. He handled Elizabeth Taylor, Audrey Hepburn, Grace Kelly, Eva Marie Saint. Every star at that time was his client.

“I was taken in to meet him, and I was this skinny little thing with glasses. He took one look at me and said to the agent who brought me in, ‘Why do we want her?’ And the agent said, ‘Well, she’s really good.’ This is with me in the room. And he said, ‘Well, OK.'”

Knight landed a contract ($400 for six months) at Warner Bros. and wound up appearing on the studio’s TV dramas like Bourbon Street Beat, 77 Sunset Strip, Hawaiian Eye and Maverick.

She also portrayed a woman whose husband was killed during World War II on a live October 1958 episode of CBS’ Playhouse 90 that was directed by Mann. He had her in mind when he was searching for someone to portray Reenie in The Dark at the Top of the Stairs.

In 1963, Knight starred with Martin Landau on “The Man Who Was Never Born,” a memorable episode of The Outer Limits. (Landau and his wife, actress Barbara Bain, stood up for her at her first wedding, to Broadway producer Gene Persson.)

At the Academy Awards, Knight lost to Shirley Jones of Elmer Gantry and then to Patty Duke of The Miracle Worker. “My father was my date for my first Oscar nomination,” she said in the 2014 interview. “When I didn’t win, Dad said, ‘You know, you can always come home.’ I think he thought that the fact I didn’t win meant that was [the end of] it.”

Knight did Dutchman onstage and then starred in and produced the film version, directed by Anthony Harvey. The movie won a critics prize at the Cannes Film Festival, and she took the best actress honor at the Venice festival. 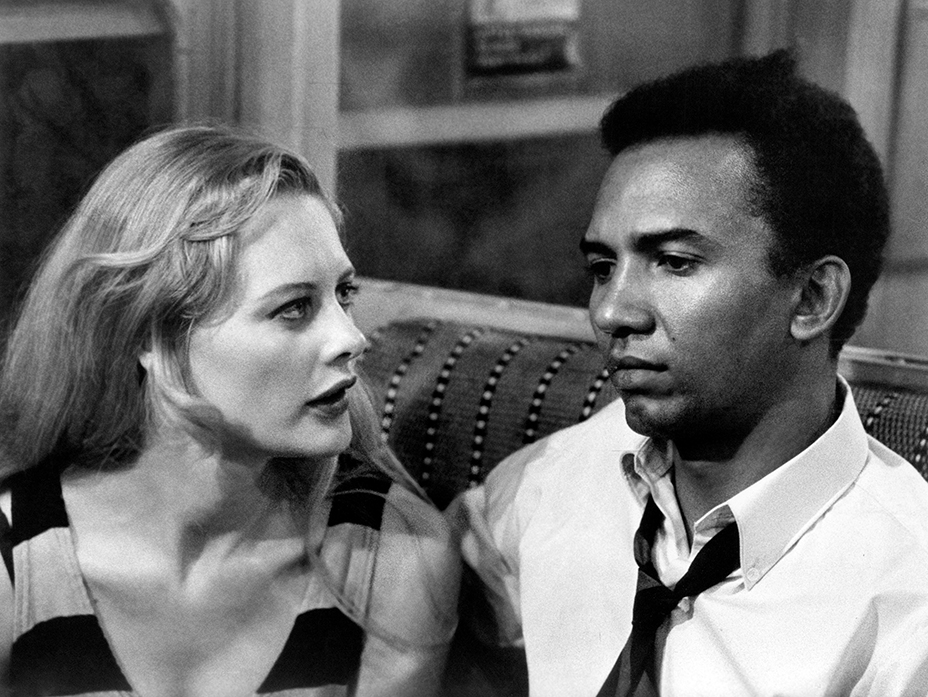 Coppola was at Cannes with You’re a Big Boy Now when Dutchman was there. “He came up to me and said, ‘Look, I really want to write a film for you,'” Knight recalled in her Classic TV conversation. “At the time, people often said that sort of thing, but you never really took it totally seriously.

“I was living in London, in a little cottage in Hampstead, and six months later he was on my doorstep with the script. He said, ‘Do you mind if I stay here while you read it?’ So I gave him some food and read the script and I said, ‘Let’s do it.'”

Knight collected two Emmys in 1995, one for playing Peggy Buckley, the real-life owner of a daycare center who’s tried for child molestation, in the telefilm The McMartin Trial, the other for a guest stint on NYPD Blue. She picked up a third Emmy in 1988 for playing the mother of Mel Harris on Thirtysomething and was nominated eight times during her career.

Knight also portrayed the meddling mother-in-law of Marcia Cross on Desperate Housewives and Faith Ford’s small-town mom on the short-lived 1998-99 comedy Maggie Winters. She could have played the wife of J.R. Ewing on Dallas but turned that down. (The part, of course, wound up going to Linda Gray.)

She was married to Persson (You’re a Good Man, Charlie Brown) from 1959 until their 1969 divorce and to British writer-playwright John R. Hopkins from 1969 until his death in 1998.

She also is survived by daughter Sophie Jacks, a screenwriter, and a stepdaughter, Justine. Her daughter Kaitlin said Knight in recent years had been working on a memoir, traveling with her family and doting over her rescue dog, Minnie.

A memorial service will be held in early 2021 in Los Angeles. In lieu of flowers, the family requests that contributions be made to The Shirley Knight Memorial Fund at Texas State University.

Knight was admired for her craft but never really famous. “Well, I have a whole theory about fame,” she said in a 2012 interview.

“I always say [fame] isn’t really something to aspire to in the sense that many, many people who are very famous are ridiculous. I mean, look at the Kardashians. There are people walking around who don’t know who The Beatles were.

“So something I [say], ‘If you think your food is you want to be famous, you’re going to starve to death.’ Your food has to be that you want to do good work and you want to become better at what you do.”