Just minutes after 10 p.m. on Monday, Shonda Rhimes readied herself to make a huge reveal about her new(ish) Netflix overall deal. The prolific showrunner — standing at a podium inside the Four Seasons Hotel ballroom in Beverly Hills, site of Elle magazine’s 25th annual Women in Hollywood celebration — even reminded herself to take a deep breath before she did so, because she knew the words would add up to be quite the bombshell.

“I am the highest-paid showrunner in television,” declared the 48-year-old network hitmaker behind ABC’s Grey’s Anatomy and Scandal, who departed the network after 15 years to join Netflix in a rich overall deal last year. But just how rich nobody really knew. At the time news of her deal broke, it was reported to be in the neighborhood of $100 million, but Rhimes said Monday night that figure wasn’t accurate, though she did not say exactly how much she’s making.

As fate would have it, seated just a few feet away from the stage was Ryan Murphy, who made headlines earlier this year when he revealed — via a cover story in The Hollywood Reporter — that he had signed a five-year Netflix contract worth as much as $300 million.

Rhimes made the revelation towards the latter part of her speech and did so to help prove a larger point about the differences between men and women. She even singled Murphy out after giving notice and praise to her Grey’s Anatomy star Ellen Pompeo, who also attended Monday night’s event to present Rhimes with the honor, the L’Oreal Paris Luminary Award.

“Since the very first lunch meeting I had with Shonda 15 years ago, it was obvious to me that she had a very different color light to shine on the world,” Pompeo said during her remarks. “I’ve had the privilege and the great responsibility of standing on the front lines beside her in a world called Shondaland, fighting the good fight and doing the most necessary and important work of telling these stories through her lens.”

Rhimes then told her own story of how she came to the conclusion that she needed to lay claim to “highest-paid showrunner” status.

“Over the course of the seasons, Ellen and I went from believing that we were employees of a network to understanding that we were the network. In a world in which women of all colors are constantly forced to battle with men for equity and inclusion, we have the good fortune to work in an environment that we had nurtured and built with enough of our sweat and tears over enough years that we no longer needed to battle men to get to the top of a mountain,” Rhimes said. “We just built our own mountains, and then we realized that all we had to do was equalize and include one another.”

She then said that women do not brag enough about their worth and accomplishments. Rhimes said that she watched as Pompeo stepped out — also in a THR cover story — to break the mold and announce that she was the highest-paid dramatic actress on television, only to see her encounter blowback.

“The other day I came to this conclusion that men brag and women hide. Even when they don’t deserve to brag, men brag — [Donald] Trump, [Brett] Kavanaugh — and when men do deserve to brag, they are good at it. They do it so well. Men brag about everything, even things that aren’t things. A little while ago in an inspiring article, Ellen told the world she was the highest-paid women in dramatic television. She did not hide. She bragged. She said she was powerful and she said deserved it, and there was some blowback,” Rhimes continued. “There should not have been. I have seen a thousand articles like that from men, but she’s a woman and she shouldn’t say things like that.”

Then came the Murphy part.

“Ryan Murphy, bless your amazingly talented heart,” Rhimes said. “When Ryan made his amazing deal with Netflix, what did he do? He shouted his salary to the world and he did this gorgeous cover shoot and photo for The Hollywood Reporter and he deserved every minute of it. I applaud him.”

She continued: “When I made a deal with Netflix, I let them report my salary wrong in the press, and then I did as few interviews as possible and I put my head down and worked. In other words, I hid. I’m getting this award for inspiring other women — how can I inspire anyone if I’m hiding?”

That’s when Rhimes announced her salary status and the ballroom — which was filled with fellow Women in Hollywood honorees like Lady Gaga, Charlize Theron, Angela Bassett, Keira Knightley, Sarah Paulson, Mia Farrow and Yara Shahidi — erupted with a standing ovation.

The mother of three closed her remarks by saying that she shared this particular story of hers because she wanted to make a point: “The struggle we are in the midst of that feels so hard is hard. But it is not impossible. Not if you have a community, a real one, a supportive one and tonight we have one another but there are women out there who are struggling and alone who do not have other women on their set. They may be the only person of color at their company, who may be older than you’re used to, or younger, or browner or less abled. Women you’ve forgotten to include in your conversations and your world. Be a person who pulls other women, new women, different women, into your circle. Widen your circle to hold more people. Lose your judgments of who someone is based on what you’ve heard or what you assume. Make some friends. Find some new sisters. Come together, work together, brag together, be powerful together and whenever we can we should be lifting one another up because lifting someone up is what lifts us.”

That proved to be a theme of the night, women helping other women, as evidenced by many of the speeches during the three-hour program, particularly the one from Anita Hill, chair of the Hollywood Commission on Eliminating Sexual Harassment and Advancing Equality. In addition to the honorees, presenters included Jennifer Lopez, James Corden, Sandra Bullock, Kathleen Kennedy, Ronan Farrow and Kenya Barris. Presenting sponsors included L’Oreal Paris, Calvin Klein and Hearts on Fire with additional help from Moet & Chandon, Lexus and HP. 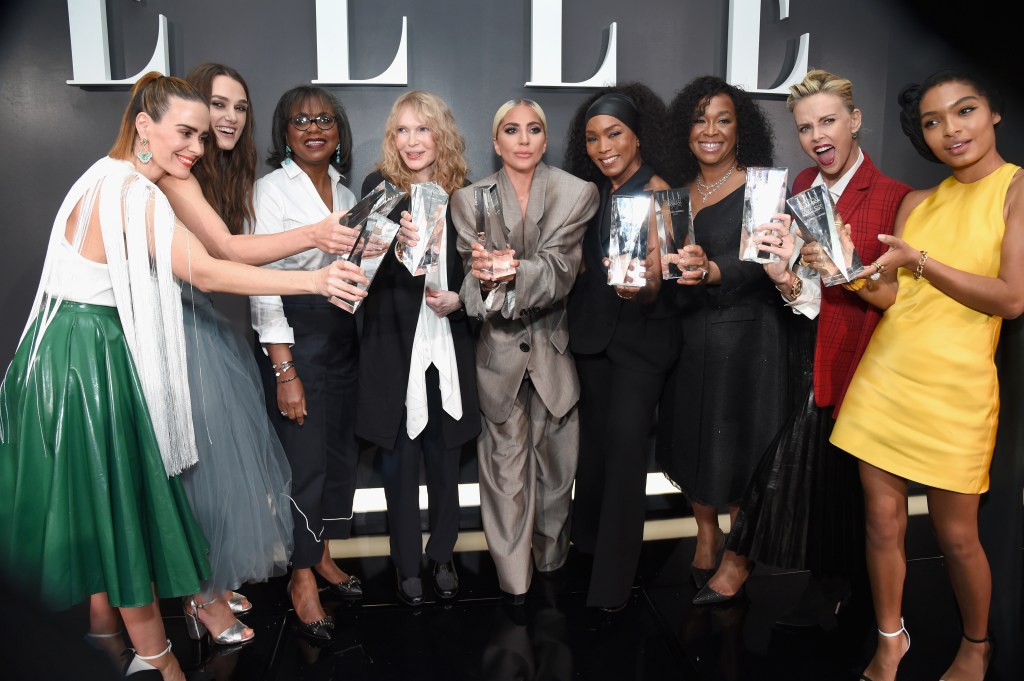 ‘TV’s Top 5’: Inside the Musical Comedy World of Peacock’s ‘Girls5eva’