Early in Significant Other, a lovely, bittersweet comedy about romantic yearning, the young gay central character, Jordan Berman, has a hypothetical discussion with his best gal pal about the ideal cheesy wedding song, which guests in the know would realize is intended ironically. Mariah? Celine? Whitney? “Whitney. Is not. Ironic,” he states emphatically, with a seriousness that extends to his own frustrated dreams of finding the perfect happily-ever-after union. Meanwhile, chronic wedding fatigue has entered his bloodstream, throwing Jordan’s encroaching loneliness into stark relief as his female college friends waltz down the aisle one by one.

In addition to the sharp, insightful writing, a big part of what prevents this delightful play from turning either trite or maudlin is the wonderful performance of Gideon Glick as Jordan, who is late-twenties, geeky-cute, comfortable in his sexuality, gainfully employed in advertising and desirably located in an Upper West Side Manhattan apartment. But somehow, despite his gnawing hunger for a fulfilling relationship, he remains hopelessly single. He and his similarly solo closest friend Laura (Lindsay Mendez) make a pact to be each other’s fallback option should the romantic horizon remain empty.

Harmon and director Trip Cullman map out the path to Jordan’s isolation by making terrific use of the play’s wedding motif to sink the knife in deeper. It opens with the bachelorette party of amusingly pushy Kiki (Sas Goldberg), whose testament to the rewards of self-obsession is an instant classic. Fast-forward to Kiki’s nuptials, where the bride nudges cynical Vanessa (Rebecca Naomi Jones) into the arms of a friend of the groom’s, a fix-up that surprisingly sticks. Cue another bachelorette night and another wedding, each of them jolted by invigorating dance breaks that make sly, generation-specific references to iconic screen choreography — Romy and Michele’s High School Reunion, Dirty Dancing, Footloose.

When the pattern continues as Laura finds love, Jordan feels the suffocation closing in on him. That causes him to lash out in selfish anger, while also making valid points about being the one left behind with no emotional support network when the old gang separates. These conflicts are carefully set up in Harmon’s script and played out with raw feeling by Glick and Mendez in scenes that enrich the play immeasurably.

Likewise the gorgeous visits that punctuate the action between Jordan and his widowed grandmother Helene, imbued with melancholy warmth by the wonderful Barbara Barrie in a welcome return to Broadway at age 85. Like all good Jewish bubbes, she worries that Jordan hasn’t found love, and he generally sidesteps her sweet-natured questioning by coaxing her down an increasingly foggy memory lane. When he finally opens up to her about his anxieties, the gentle words of advice she offers are touching, even if they provide scant comfort. 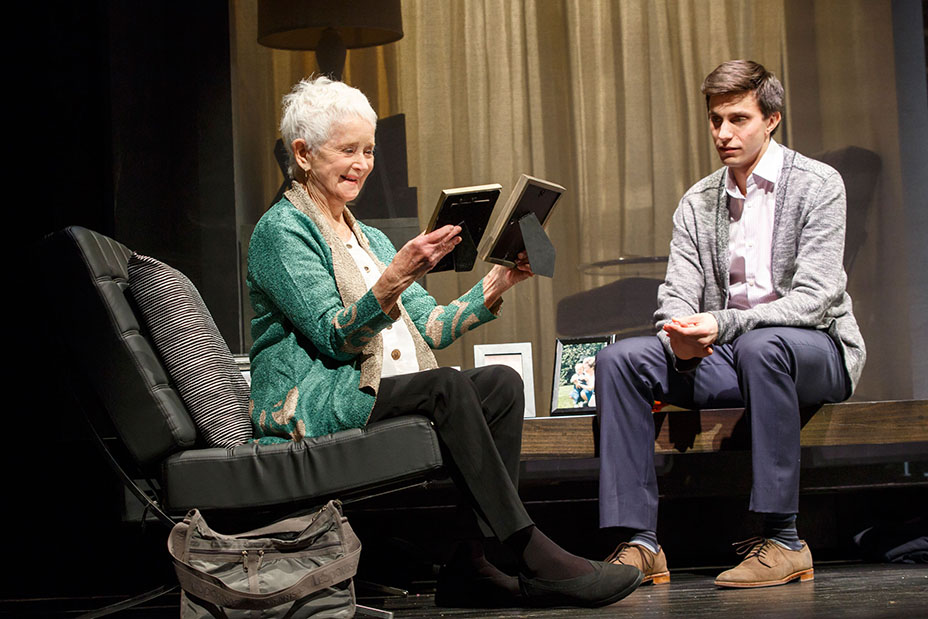 Harmon writes with knowing empathy about the misread signals, the skyrocketing hopes and the premature leaps that all of us have experienced at some point in the quest for love. Jordan’s rapturous aria about the new guy at work, Will (John Behlmann), emerging from the pool at a weekend office party like a dripping Adonis, is just the beginning of an emotional rollercoaster ride that will have many in the audience covering their eyes in excruciating self-recognition. It culminates in a virtuoso monologue from Glick as Jordan tries to talk himself out of hitting send on an email that screams borderline-unhinged neediness. Later, a promising overture with a renewed acquaintance (Luke Smith) goes south for reasons beyond Jordan’s control, which is even more moving.

The play is so light on politics that Jordan could be a character of any gender or sexual orientation. His insecurities, his distorted sense of his inadequacies and his feelings of exclusion are familiar from countless young men and women whose lingering adolescent awkwardness can be roadblocks to love. But making him a gay man in a liberal urban environment, in which casual hookups are just a click on the laptop away and marriage is a legal possibility, makes his pain resonate more acutely.

With the exception of the divinely spiky Jones, the entire cast has been with the play since its hit off-Broadway premiere with the Roundabout Theatre Company in summer 2015, and there’s not a weak performance in the bunch. Goldberg has gotten even funnier, which seemed impossible, while Barrie’s unsentimental tenderness has taken on new shadings. The superb Mendez matches Glick note for note in a complex balancing act of Laura’s humanity, her loyalty and her right to pursue her own happiness, shaking off the wallflower label others would attach to her.

Behlmann and Smith are appealing in their multitasking roles, etching distinct personalities as the various men in the orbit of Jordan and his girlfriends. Having impossible dreamboat Will and Laura’s romantic savior Tony played by the same actor sharpens the sting. But it’s the sensitivity and self-exposure Glick brings to the central character — careening from self-effacement to self-pity to crushing fear — that provides the play’s aching heartbeat.

Cullman, a seasoned regular on the New York theater scene, makes a sturdy Broadway debut with this production and will follow later in the spring with the Six Degrees of Separation revival, starring Allison Janney, John Benjamin Hickey and Corey Hawkins. One of the director’s key skills is the fluid scene transition, and he keeps this play moving at a very satisfying clip, shifting smoothly among various locations on Mark Wendland’s stylish split-level set. Kudos also to lighting ace Japhy Weideman, who creates different moods for party, office, home, ceremony and fantasy interludes.

From the tart comedy of the early scenes, peppered with smart one-liners, droll pop-culture references and savvy social observations, to the emotionally piercing later developments, Significant Other is consistently pleasurable, funny-sad entertainment that represents a strong follow-up for Harmon to his widely produced earlier hit, Bad Jews. The playwright clearly loves every one of his characters equally, imperfections and all, and the feeling is infectious.