“Like many nonprofits, we have been devastated,” explains Rabbi Marvin Hier of COVID-19’s impact on the Simon Wiesenthal Center.

The pandemic forced a postponement of its marquee fundraiser — an April event that was to honor George and Amal Clooney (new date is still TBD) — and halted activities at its Moriah Films division and the Museum of Tolerance which would have hosted “tens of thousands” of students in recent months. In an attempt to swing the pendulum, Oscar-winner Hier and his team went through the Wiesenthal archives and retrieved “fascinating material” now for sale on the organization’s website.

“In the midst of a pandemic, the one thing that hasn’t stopped is hate and anti-Semitism,” Hier explains to The Hollywood Reporter. “The question became, how in such a climate could we could we still reach our members?”

The answer: Six offerings in total, including copies of unpublished speeches delivered during tribute dinners by longtime trustees Frank Sinatra (on Jan. 19, 1980) and Elizabeth Taylor (on Nov. 19, 1980); a copy of a signed image of Martin Luther King Jr. with text from his “I Have a Dream” (Aug. 28, 1963) and Nobel Peace Prize (Dec. 10, 1964) speeches along with text from Abraham Joshua Heschel’s “Race in Religion” speech (Jan. 14, 1963); letters from Albert Einstein confirming his solidarity with his fellow Jews in protest of the Nazi regime; photos and unknown stories from the historic May 14, 1948 declaration establishing the state of Israel by David Ben-Gurion; and other ephemera from Wiesenthal himself, and Presidents Harry S. Truman and Dwight D. Eisenhower and U.K. Prime Minister Winston Churchill.

Cost of the tax-deductible items will range from one for $1800 or a full set for $10,000. “It’s a new format for fundraising,” explains Hier explains of the gifts he suggests could be for home, office, school or community centers. “And a reminder that the one thing that never stops is the purpose of the Simon Wiesenthal Center.” 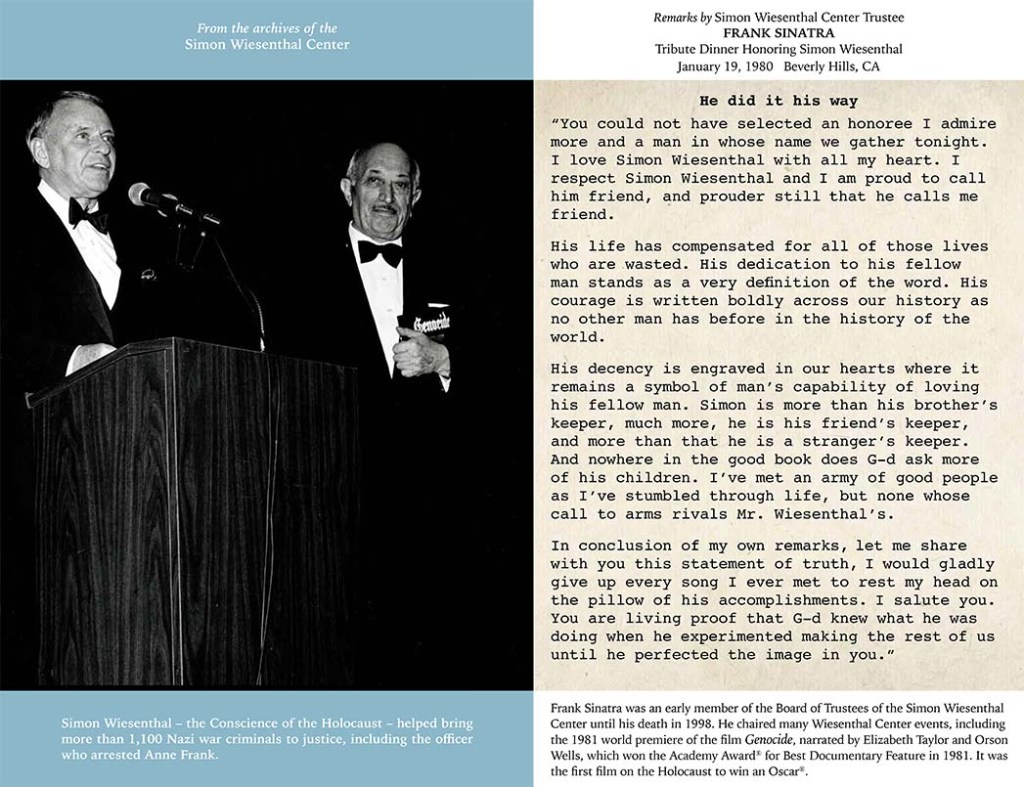