While Christopher Bailey’s departure from Burberry was the big event of the day, London Fashion Week bustled right along on its second day with Henry Holland urging everyone to “Grow Up” as he took a turn toward the (slightly) more tailored and Ports 1961 taking over the tanks of the Tate Modern for a minimalist and modern collection.

Simone Rocha (fans of her dark take on femininity range from Chloe Sevigny to Rihanna) employed a pregnant pause to her advantage in a Victorian setting at the city’s gilded Goldsmith’s Hall. A reverent hush came over the crowd as everyone thought the show was about to start, but lasted for several minutes as guests absorbed the ornate Goldsmith’s Hall under chandeliers flickering with real candles (what fire hazard?). 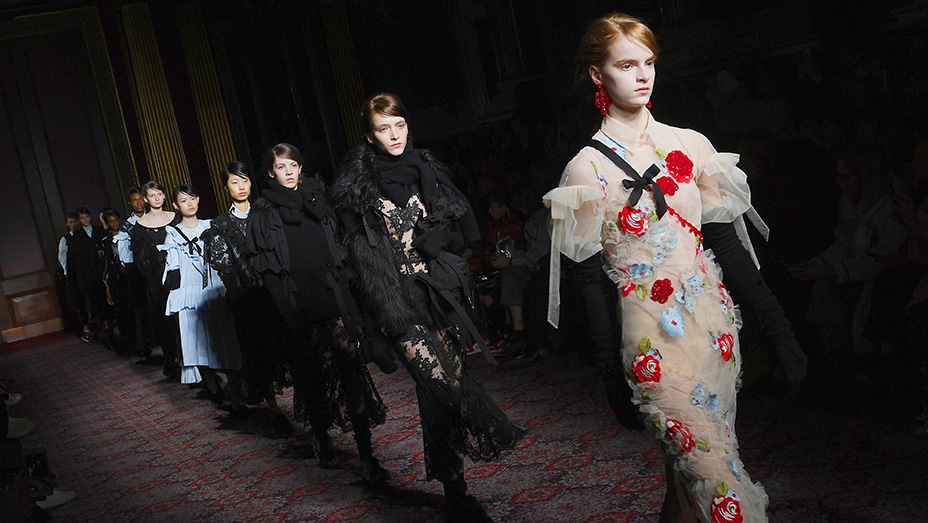 The cryptic show notes referenced “female ties and practical strides” along with “bedtime slippers,” and she delivered both with wide-legged trousers (hello, Meghan Markle) covered by what were essentially lace apron skirts with some faux-fur fuzzy shoes.

It was full-frontal feminine, with lace and bows and layers of tulle, but she kept it balanced with more masculine military touches.

The coats were spectacular in structure, with dropped shoulders and rounded arms in both soft lace and shiny patent, and she added a military touch with bows as epaulets and sashes. A couple of the pieces could stand to lose a few frills, but Simone’s never been shy about her style, and it’s heartening to see a female designer take her final bow in her own creations.

Can’t get your hands on one of Liza Minelli’s soon-to-be-auctioned Halstons? Halpern created a sequined disco explosion just for you. The collection was a frenzy of sparkly zebra print, florals and flames, all in an abandoned building and set to a big band-slash-disco soundtrack.

Whatever wasn’t covered in sequins was made out of lurex or textured faux fur with exaggerated shoulders. Nothing here is for the wallflower, unless your walls are covered in glitter.

Halpern, the Rising Red-Carpet Label You Need to Know

Halpern covered all the windows with pink plastic, giving the cavernous rooms a gentle tint. Maybe he’s looking at the future through rose-colored glasses and seeing a more optimistic time when we can all dance the night away?

The young American certainly has a lot to be happy about; barely out of school and only 30, he’s already dressed Diane Kruger, Lupita Nyong’o, Katy Perry, Cardi B., Rita Ora and Marion Cotillard. He provided a treasure trove here for anyone looking to join the sparkly Halpern tribe.

Hussein Chalayan took his collection center stage, presenting models at a theater in the eastern Exmouth Market area. The designer was inspired by Paris, or rather it’s less-than-desireable outskirts, as he used a map of the “banlieue” as inspiration for prints.

The cocoon capes and coats gave way to hoods and modern caftans in deep sands and rusts, before models walked out in molded plastic masks that altered the shape of the face and head.  It was a conceptual-feeling collection, which we’ve come to expect from the designer, who always imbues his clothes with a message.

This one was a “reaction to this immigration ordeal we are witnessing,” he said in show notes, asking the audience to embrace new arrivals. That he was presenting it in a post-Brexit Britain seemed to be lost on much of the audience.