Even in the happiest of families, brotherhood can be fraught, and the titular duo in The Sisters Brothers, played by John C. Reilly and Joaquin Phoenix, are the embodiment of filial push and pull. In this rollicking yet introspective Western from French auteur Jacques Audiard, Reilly and Phoenix play hired assassins searching for Hermann Kermit Warm (Riz Ahmed), who has been accused of stealing from their employer. Their journey through Gold Rush-era San Francisco and the Wild West is an episodic series of adventures — not unlike the making of the film itself, which took the multinational cast and crew to remote locations in Romania, Spain and France.

Making the film, which is receiving a Gala Presentation at The Hong Kong International Film Festival, was a labor of love for Reilly, 53, who also produced the project alongside his wife, Alison Dickey. Reilly spoke to THR about how he and Dickey worked for the better part of a decade to bring the project to the screen.

What appealed to you about the book when you first read it, and why did you want to turn it into a film?

I was working on a movie that was based on a manuscript that Patrick DeWitt had written called Terri that my wife also produced. And Patrick said, “Hey, I wrote this other book. Are you guys interested in reading it?” Alison devoured it in a day and then gave it to me, and the same thing happened. It’s just a real page-turner. You just fall into the story, and you’ve got to know what happens next. But what impressed me [and made me want] to turn it into a film was, it was the first time I’d seen Western characters, or the Western milieu if you will, with an open, emotional quality. In a lot of Westerns, in a lot of the classic, nostalgic, great American Westerns, the characters tend to be sort of opaque. You can’t get a read on their emotions. You see that they’re up to something or whatever, but that’s one of the great things about Clint Eastwood — what he’s feeling is a mystery, you know? In this book and this story, my character, Eli, is sort of the narrator of the book — not so much the movie — but you really get a sense of what it’s like to live at this time and what it feels like to live in that world. And then of course, I come from a large family and I have brothers, and I think anyone who has a brother or sister knows how intense that relationship can be and the different phases you go through as you’re growing up together, and so it had a universal appeal in that way.

The tone of the book is unique. It’s dark and funny and poignant. What kinds of conversations did you have with Jacques Audiard about how to translate that tone to the screen?

What we were looking for when Alison and I were first shopping it around was not just a great filmmaker, we wanted someone to make a personal film about this story. A lot of our favorite films — and we love all the greats — many of them have a personal quality to the filmmaking where it seems as if the director is telling their own story as well as the material and the historical world that they’re in. So we went around looking for someone who felt that way about the book and our initial scripts. And we’re so lucky we got Jacques interested. We met with him in Toronto at the festival one year, and he took to it. And it took a long time. It took many years of building bridges between France and America and Spain and Romania and all these places where we shot. But it wasn’t so much me telling Jacques, “You have to do this or that.” It was the opposite. It was like, “Do you love this book? OK, let’s make a film about it. How do you see it?” And we put it into his lap and said, “Make your own film about this, and hopefully I’m in it.” One pre-requisite was that I was attached in some way, but even that — I was willing to let Jacques cast the film as he saw fit. If he wanted me in another role — and he was considering that at a certain point — that’s the freedom we wanted to give him, and that’s certainly what French directors are accustomed to. Directors of Jacques’ stature are used to being able to adapt a script and make the film the way they make films, so our process for capturing the book was pick the right person and get out of the way. You’ve lived with this project for a long time, and it’s multinational.

How difficult was it, logistically, to put it together?

It’s the most difficult movie I’ve ever produced. That said, it’s the only movie I’ve ever produced. Everyone who got involved with this movie, by the end of the process, I felt like we each were putting our own personal mark on it, our own personal emotional backstory from our own lives into the material. And that includes the crew and the horses and everyone else. So it was difficult to make, but it was a real labor of love. And honestly, to be taking any of the credit for the larger picture of producing the movie is a little unseemly for me. I definitely did my share of producing work, but my wife was the person behind the scenes connecting the French with the Americans and the Spanish, and she was in there making it happen.

Tell me about Eli Sisters and how you prepared for the role.

I have done a lot of films based on books, and my feeling is the book is the research. The first thing we’re trying to capture is the essence of the book, so that was everyone’s bible. Then once the final draft of the script is written, that becomes the bible. But in general about research, I feel like I already had a strong kinship to this person before I even started — like from the moment I read the book, I was like, “Oh, I understand how that feels!” So I already felt strongly connected to it. That said, we also trained on horses and trained with period-specific guns, which are hand-loaded guns — this era of the film is before the cartridge bullets came into use — so it was interesting. The way to fire was very slow and deliberate back then. It was still deadly; you had to be careful about what you said in those days because the closest law was hundreds of miles away, usually. So yeah, I did all the stuff you see my character doing, short of murdering people.

What about Eli spoke to you personally?

I identified with his battle for self-esteem. I identified with his struggle to find self-reliance and agency in his own life. I think everyone feels that way. One of the things that comes through in the book is that you see Eli, and there’s one thing going on inside of his heart, and there’s another thing going on in his daily life about what he’s doing, so I can relate to that. He’s so strongly bonded to his brother, and I do know what those intense relationships are like. I’ve had a lot of relationships like that, not only in my family but with friends and stuff, so I felt like that was something I immediately understood. 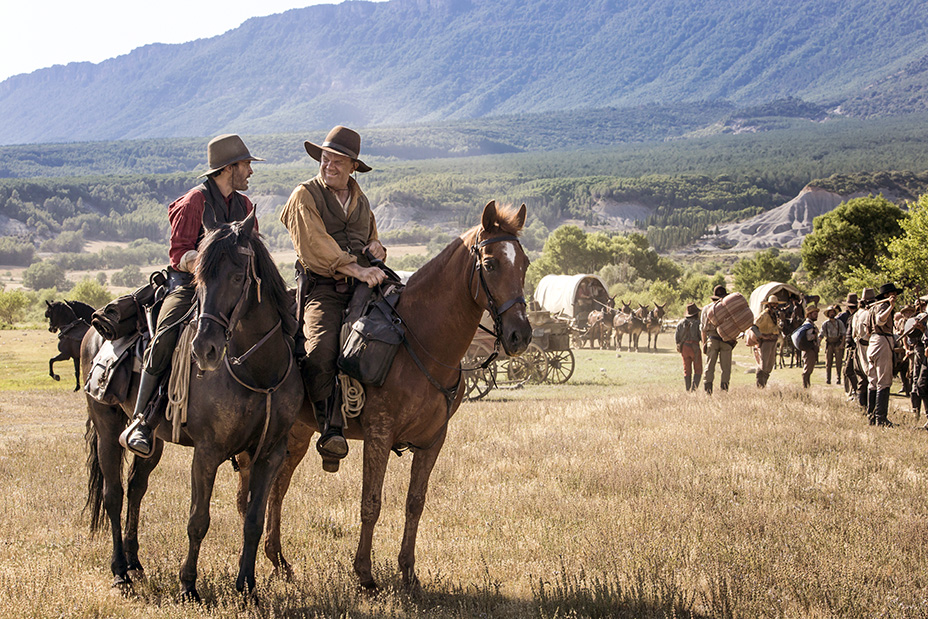 You mentioned self-esteem. One interesting detail in the book is Eli’s anxiety about his weight and his looks and whether he’ll ever be loved. We don’t usually get to hear tough guys in Westerns voice those concerns.

Yeah, he’s someone who’s struggling to feel like they deserve to be loved and trying to do things that they think will make them be loved. So I think that’s a universal quality. It’s a tough thing when you’re killing people for a living, to feel like you’re deserving of anything positive. But that’s the struggle of these guys. They were born into this job in a way through the trauma of their childhood. They were almost pressed into service before they had a choice.

Can you discuss the decision to turn the character of Mayfield, who is a man in the book, into a woman, played by the transgender English actress Rebecca Root? How did that come about?

That was purely Jacques’ decision. Jacques used to be an editor, and he has a shrewd eye for when things drag or when things are not surprising, or when things are unoriginal or uninspired. And he came across, I think, a photograph of a person of unspecific gender from the 1800s. It looked like a woman but she had a mustache and he thought, “Oh my God, look! It wasn’t just always very traditional roles the way we think of them.” I thought that was really a stroke of genius on Jacques’ part to cast Rebecca, because first of all, she’s a brilliant actress. She did such a good job in the movie. But it lends a surreal quality to the moment. We’re expecting a man. We think the town is named after a man because any town is always named after a man, and all of a sudden you come upon this place and it’s named after this woman who has some slight masculine qualities. So I think Jacques chose to cast Mayfield as a woman in this case because he wanted our characters, as soon as we got to Mayfield, to feel destabilized and as if our mission was not as simple as we thought it was going to be. In the movie [Mayfield’s gender is] not specified, although she’s a woman, for the way we accept her is as a woman. She’s presenting as a woman, so we’re like, “OK, well, I thought Mayfield was a man, I guess I’m wrong, hello!”

The fact that Mayfield presents as a woman in the movie also flips the script on the stereotypical female roles we usually see in Westerns.

Jacques and our crew was at least 50 percent female. All the people I interacted with every day around the camera were female.

Was that by design?

Yeah, Jacques and I and Joaquin and every other man involved with the film as far as I could tell was a pretty strong feminist, and I think Jacques values that in terms of balance in the story. I don’t want to get your hopes up — there’s not that many more female characters in the movie than what you’ve described. But some very strong, feminist women who I know and who I really respect, when they’ve seen the film they’ve said, “Wow, this film really looks at where men have come from and where they’re going and what is a possible future for masculinity.” Not to pull a muscle trying to point out relevancy in the film, but I do honestly feel like that is something that comes across in the movie, this idea of, “What is the most advanced human being, and where are we and how are we going to get there?”

What was the most rewarding thing about making this film?

Hong Kong Action Legend Sammo Hung on 50 Years of Blood, Sweat and Sacrifice: “Every Nerve Ending Has to Be in Play"