The 2011 Broadway revival of The House of Blue Leaves was too unbalanced to do the job, but Trip Cullman’s razor-sharp staging of Six Degrees of Separation serves as a welcome reminder of the fiercely intelligent, pungently funny voice of playwright John Guare at his vintage best. The thoroughbred Allison Janney stars as Ouisa Kittredge, a well-heeled Manhattan WASP who dreams in dollar signs until a beguiling young African-American trickster, imbued with both obfuscation and naked yearning by Corey Hawkins, exposes her to the spiritual emptiness beneath her complacent sophistication. While those two sensational performances occupy the play’s molten center, the entire large ensemble that surrounds them is on fire.

That heat is due in part to Cullman’s whiplash pacing, with actors literally bolting onto the stage hollering their entrance lines, and scenes that fold together with the dizzying dexterity of an ace card shark shuffling the deck. But it also rises from the play itself. A 1990 hit that spawned a Kevin Bacon party game and a catchall cultural tag for interconnectedness, it remains a work of stinging satirical brilliance, creeping poignancy and teasing ambiguity that challenges us to think about how willing we are to allow authentic experience to pierce our surfaces.

Ouisa and her art dealer husband Flan (John Benjamin Hickey) are entertaining wealthy South African friend Geoffrey (Michael Siberry) in their roomy Fifth Avenue apartment — designed by Mark Wendland in chic austerity, with a pointedly referenced double-sided Kandinsky in prominent view before a deep burgundy scrim with glimmering signs of further opulence beyond. The object of the evening is to hit up their guest for a $2 million stake in a Cezanne that’s come on the market, which Flan will then resell to Japanese investors, netting them all a tidy profit. The Kittredges are practically salivating at the prospect, cooing the words “two million dollars” like an aphrodisiacal mantra.

Actually, that’s not really how the play starts. It begins with Ouisa and Flan rushing on stage the morning after, in elegant bathrobes and high agitation, surveying the chaos, assessing any possible damage or loss, and then recounting what happened directly to the audience. The doorman showed up a young man named Paul (Hawkins) who had sustained a knife wound in a mugging in Central Park. Claiming to be a friend of their children from Harvard, Paul revealed he’d been robbed of all his cash and cards and didn’t know where else to go. Other salient details surfaced, notably that Paul’s father, Sidney Poitier, was flying in on the Red Eye that night and was about to direct a screen adaptation of — wait for it — Cats. 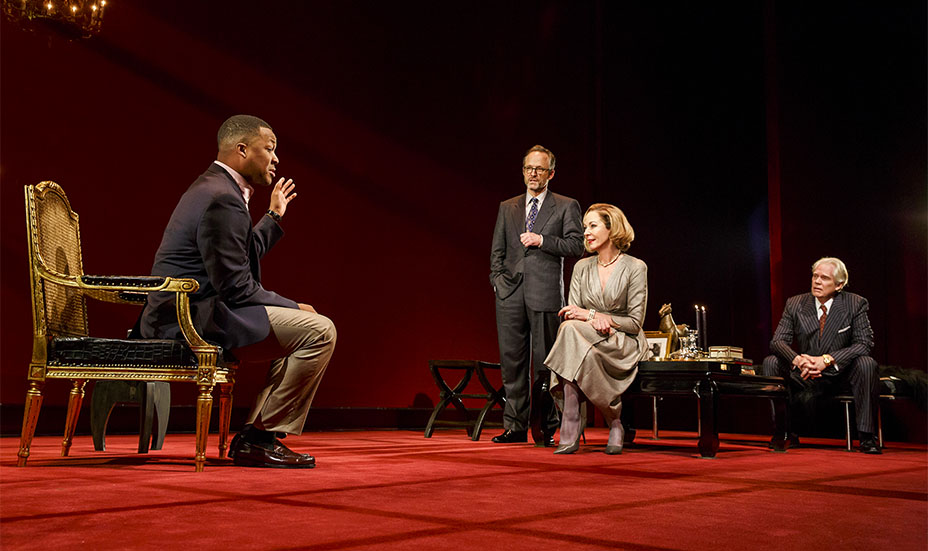 This is 1990, pre-cellphones and internet, so that story more or less holds water. Besides, Paul seems charming, articulate and sincere, and Ouisa and Flan are so beyond thrilled to hear that their children have apparently said nice things about them, they hang on the stranger’s every word. And even if it later emerges that Ouisa once described Cats as “an all-time low in a lifetime of theatergoing,” she and Flan get positively giddy at the prospect of being extras in the film.

Before long, Paul is cooking them dinner, dazzling them with his eloquence on the cultural relevance of The Catcher in the Rye and helping to seal the $2 million deal. But after they put him up for the night, they’re horrified to find him the next morning intimately connected to a male hustler (James Cusati-Moyer), who’s not the least bit shy. The panic of that discovery is played as hilarious knockabout farce, leaving Ouisa and Flan breathless at the violation of it all, and Paul supposedly mortified as he’s shown the door.

Guare lifted his inspiration from a 1983 newspaper account of a con man who talked his way into moneyed Upper East Side homes via methods similar to Paul’s. That gives the playwright a figure of unknown identity and origin through which to investigate the theory Ouisa has recently read, maintaining that every person on the planet is separated by just six other people. The entanglements multiply when it’s revealed that the Kittredges‘ friends, Kitty (Lisa Emery) and Larkin (Michael Countryman), had a similar visit, all of them somewhat deflated to learn they don’t have exclusivity on the anecdote. When an obstetrician, Dr. Fine (Ned Eisenberg), also falls for Paul’s scam, the police get involved, and the source of Paul’s access to them all is traced.

There’s merciless comedy here, skewering rich, liberal New Yorkers — their insularity, their susceptibility to flattery and the chance of a brush with fame, their hunger to fill the void of their spoiled children’s withheld affections. (Scenes involving the various adults’ petulant offspring, literally shrieking their resentment in withering parental takedowns as they slump all over the furniture, are a riot.) But the play is less about the desecration of a privileged class or the aspirations of outsiders than it is about the realization that nobody really knows anybody, least of all themselves.

That lesson proves eye-opening for Ouisa most of all, as if the desire of Paul — a sensitive young man of seemingly boundless intelligence and potential — to be part of her world makes her see its lack of authenticity. Somehow, even long after he’s been exposed as a fraud whose shaky moral compass leads to tragedy, the encounter and subsequent contact with Paul represents a kind of connection, a vital human experience, even an act of imagination that Ouisa had forgotten was possible. 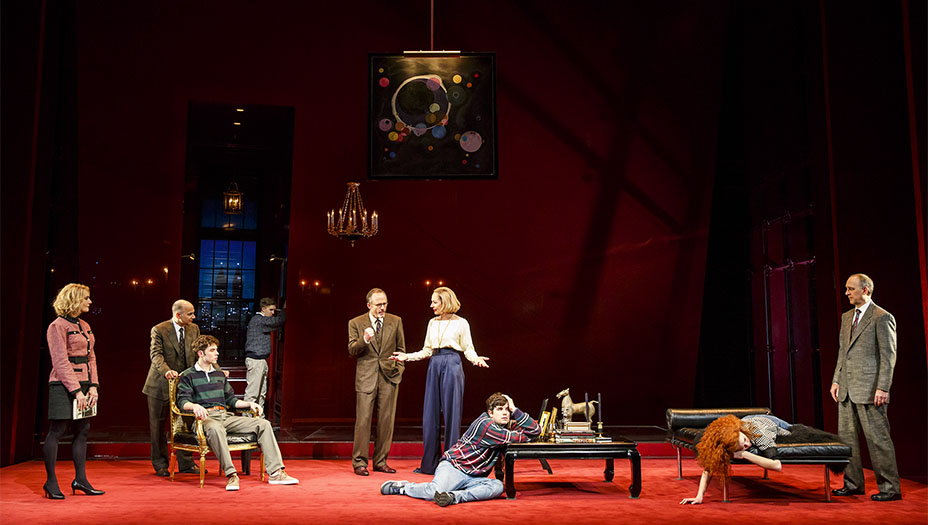 All that makes her a fabulous role, and those who recall Stockard Channing’s indelible performance in the original production (reprised in the so-so 1993 movie) may be reluctant to give equal credit to Janney. But I found I couldn’t take my eyes off her. She looks spectacular in costumer Clint Ramos’ sleek socialite outfits, and she nails both the initial poise and the despairing need that creeps up and takes her by surprise as she realizes her connection with this impostor was something real, lasting and all too rare.

Hawkins, one of the breakout stars of Straight Outta Compton, is moving in similarly unexpected ways. He’s so utterly persuasive in suave interloper mode that when we see the raw, unrefined Paul, or whatever his name is, it’s a shock. His seductive powers feed an erotic charge into brief private moments with Ouisa, but the magic ingredient of Hawkins’ expertly judged performance is not his character’s calculation; it’s his spontaneity, projecting an openness that suggests he seems almost to believe the fictions he spins. Playing a character whose dishonesty borders on the sociopathic, his vulnerability is equal to his intensity.

Given how thoroughly the myth of a post-racial America has been debunked during the Obama years and since, and how deeply awareness of wealth inequality has penetrated the cultural discourse, Six Degrees of Separation might be expected to have gained in currency with its insights into the divide between rich and poor, white and black, male and female, gay and straight. However, the play remains very much of its time, which doesn’t mean it’s not still hugely entertaining, clever and provocative, especially in Cullman’s superbly cast, high-octane production.

It feels like a luxury worthy of Paul’s envy to have a populous ensemble of 18 that includes not only the always impeccable Hickey but also seasoned stage pros like Emery, Countryman, Eisenberg and Siberry, alongside dynamic young talents like Colby Minifie and Chris Perfetti, playing the Kittredges’ daughter and Paul’s lovestruck gateway to them, respectively. The crucial aspect is that beneath Cullman’s fleet presentation and Guare’s crackling dialogue and taut structure, all these fine actors provide glimpses of the sadness — recognized or unacknowledged — of elusive connections.