You may want to avoid seeing the new play by Joshua Harmon if you’re not crazy about what you see when you look in the mirror. As one of its main characters would have it, sexual attractiveness counts for more than anything else in life. “Hot is everything,” he tells his skeptical adult daughter. “It’s everything!” And while the view being expressed is the character’s and not necessarily the playwright’s, it’s hard to avoid the feeling that Skintight, receiving its world premiere off-Broadway courtesy of Roundabout Theatre Company, is as shallow as that philosophy.

The dark comedy depicts the familial tensions among three generations, including obscenely wealthy fashion designer Elliot (Jack Wetherall, playing a character not so subtly inspired by Calvin Klein), his recently divorced fortysomething daughter Jodi (Idina Menzel, in a rare nonmusical role) and Jodi’s son Benjamin (Eli Gelb). Jodi and Benjamin, who have arrived at Elliot’s palatial West Village townhouse to celebrate his 70th birthday, are surprised by the presence of Trey (Will Brittain), his hunky new partner who is all of 20 years old, the same age as Benjamin.

Benjamin, who is gay himself and on a break from studying “queer theory” in Budapest, finds himself inevitably drawn to his grandfather’s new lover, especially since the muscular Trey has a habit of hanging out in the living room late at night wearing only a jockstrap. Observing the comically tense proceedings from the sidelines are two very discreet servants: the middle-aged Orsolya (Cynthia Mace) and the fortysomething Jeff (Stephen Carrasco).

The setup seems rife with comic possibilities only spottily realized in a play that uneasily mixes farcical situations with strained attempts at profundity. Harmon — who has won acclaim for such previous works as Bad Jews, Significant Other and Admissions — certainly has a talent for crafting bitingly arch dialogue that’s on ample display here. But this work, whose major plot element involves Trey proposing marriage to Elliot, never quite comes together. The evening feels diffuse and overlong, filled with scenes that offer some laughs but peter out with little narrative momentum. We never come to particularly care about any of the eccentric characters, some of whom verge on stereotypes.

The evening’s centerpiece is a lengthy exchange between Jodi and her father in which she tries to convince him that Trey is only interested in him for his money. Elliot doesn’t fully dispute the allegation. Instead, he presents an impassioned argument that all relationships are inherently transactional and that Trey provides him something that he desperately needs. “Sex is life, and I want life,” he tells her. “I want to wake up next to life, Jodi. And I can. So why the fuck not?”

Michael Jackson Musical in the Works for Broadway

The argument is certainly provocative, but it makes little impact because it feels so obviously scripted. And so it goes for most of the play, which seems designed more as a delivery system for bitchy one-liners than a comic examination of the all-important role of beauty in our lives.

The performances are a mixed bag. Menzel does fine as the aggrieved Jodi, frequently getting laughs with her sharp line readings. Gelb is even better as Benjamin, delivering his jokes with the authority of a seasoned sitcom actor. But Brittain leans too heavily into Trey’s vain silliness, while Wetherall, playing a character who’s supposed to be in thrall to hedonism, for some reason looks vaguely miserable throughout.

Daniel Aukin’s assured staging fully realizes the play’s comic aspects and Lauren Helpern’s gleaming modernistic set is a pleasure to behold, even if it doesn’t exactly smack of the West Village. But for all its surface polish, Skintight feels hopelessly skin deep. 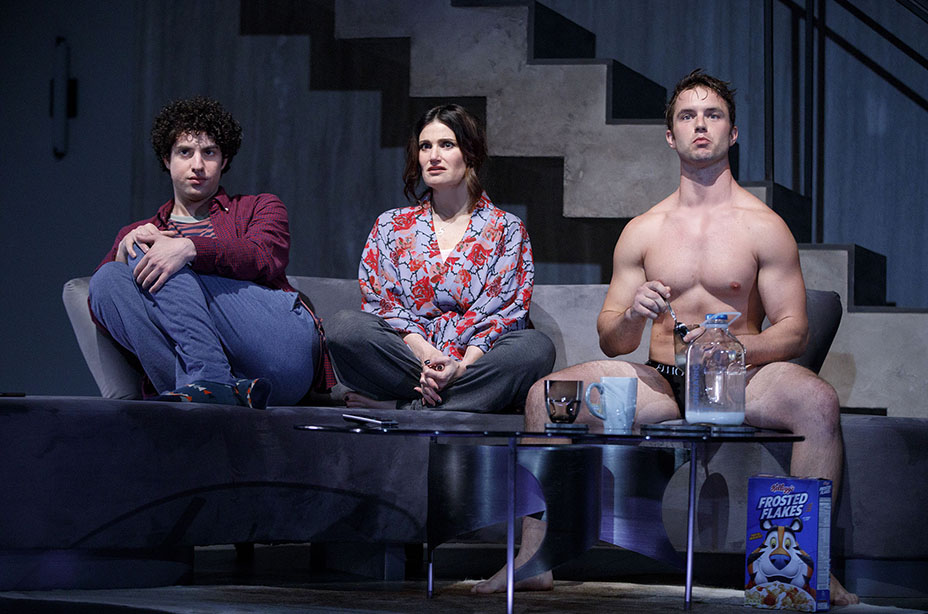