It’s the RBG trifecta of 2018: a documentary, a feature film and a museum exhibition.

Supreme Court Justice Ruth Bader Ginsburg, 85, has inspired a cultural fandom around her dissenting opinions that fight for gender and racial equality, after she faced unequal pay and discrimination on the basis of gender and pregnancy while rising in the legal world.

Twenty years after Ginsburg was appointed to the Supreme Court, law student Shana Knizhnik created a Tumblr in June 2013 dubbing the social justice warrior the “Notorious RBG” after the court “gutted” the Voting Rights Act and Ginsburg dissented to “send a message,” Knizhnik said.

“It’s also a space to celebrate this amazing person’s life,” Knizhnik said of the site. “I thought what better way to do that than to compare her to the late, great Notorious B.I.G. As she likes to say now, they actually have a lot in common,” as both are from Brooklyn, New York.

Ginsburg sparked an “internet phenomenon,” Knizhnik added, with fans clinging to the saying “You can’t spell truth without Ruth.” The two slogans are printed on everything from coffee mugs to T-shirts (some fans get tattoos of her face). With writer Irin Carmon, Knizhnik published the book Notorious RBG: The Life and Times of Ruth Bader Ginsburg in 2015.

This year, CNN Films and Magnolia Pictures debuted the documentary RBG at Sundance (lifetime gross: $14.02 million). On Dec. 25, Focus Features and Participant Media will release a feature film about her life, On the Basis of Sex, starting Felicity Jones and Armie Hammer, and written by Ginsburg’s nephew Daniel Stiepleman (RBG makes a cameo).

But on Friday, the Skirball Cultural Center paid tribute to the feminist icon by turning the book into the first exhibit about her with artifacts, home videos and, yes, outfits — Ginsburg is known for feminizing her justice robes with collars. She wears special collars when delivering her “spicy oral arguments,” as curator Cate Thurston calls them. 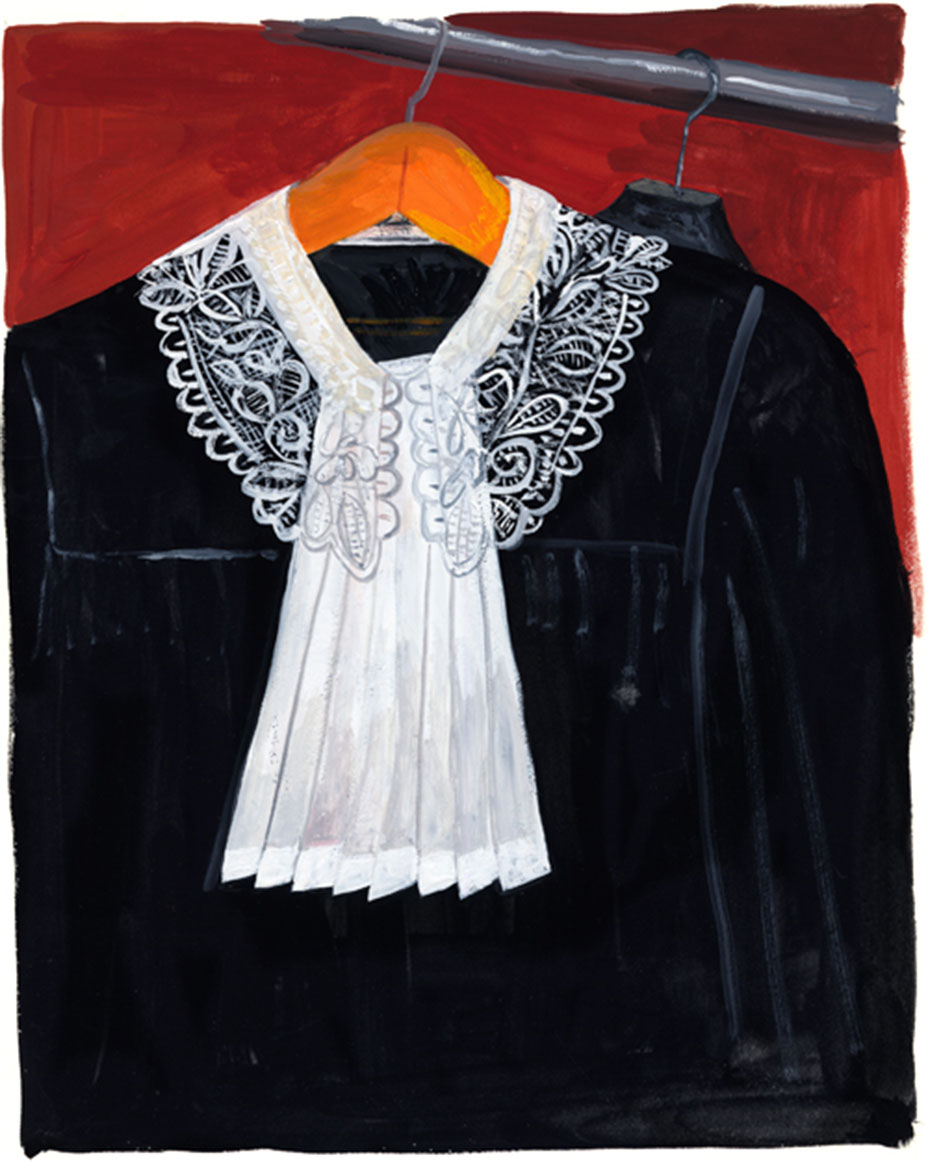 On display through March 10, 2019 are the green costume Ginsburg wore onstage while appearing in the opera The Daughter of the Regiment in 2016, along with Ginsburg’s robe and jabot, on loan from the justice herself. A mannequin dons a red sweater, black dotted skirt and hair scarf worn by Jones in the forthcoming feature, courtesy of costume designer Isis Mussenden and Focus Features (Carmon and Knizhnik were invited to the set in Montreal to witness the “incredibly authentic” details of Ginsburg’s replicated apartment).

Also on display: a costume from the Felicity Jones feature “On the Basis of Sex” about RBG. @THR pic.twitter.com/FkLfVOL6mi

Some of the exhibition’s documents and photos were also featured in the documentary, directed by Julie Cohen and Betsy West, which captures her life pursuing law school as a rare female in the profession alongside her husband Martin “Marty” Ginsburg, a feminist for his support of her career. Skirball’s gallery includes an area about Marty’s kitchen, with his whisk and mortar and pestle on loan from Ginsburg, since he was the one to cook dinners at home. 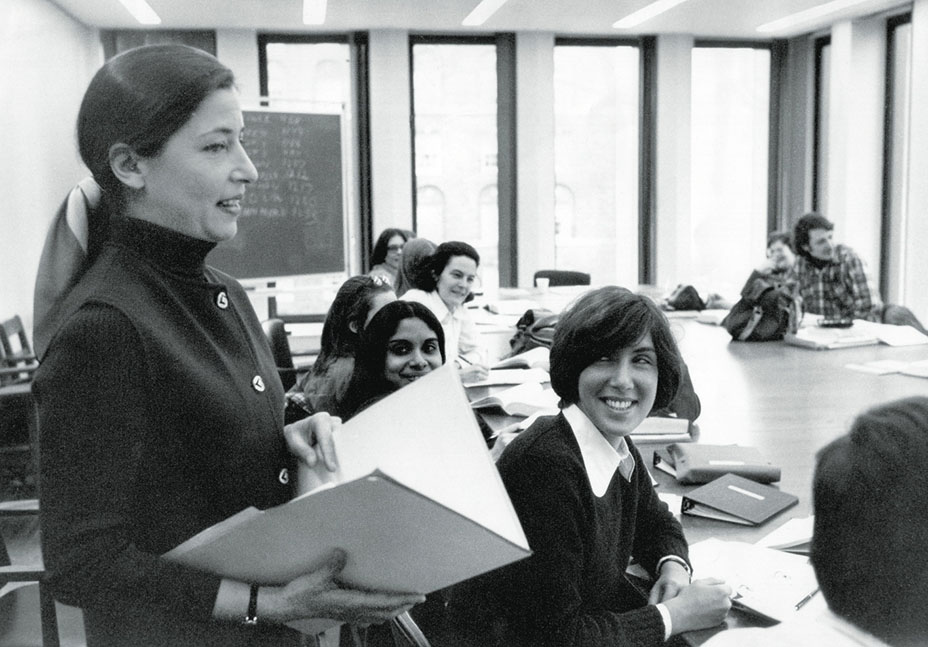 Set up chronologically, the exhibit stars with a replica of her Brooklyn living room, where Ginsburg eagerly asked questions at her seder table, and moves into her days at Cornell and then Harvard and Columbia Law School, where she graduated tied for first in her class. Her high school yearbooks describe her as a “go-getter.”

Titles of the stages of her life are scrawled out in graffiti print on the gallery walls, tying into her street-inspired nickname.

The museum progresses into her time as a lawyer, when she picked cases that would establish precedents for gender equality like Weinberger v. Wiesenfeld and Struck v. Secretary of Defense. Visitors can listen to audio of her dissents or snap a photo of themselves wearing robes. 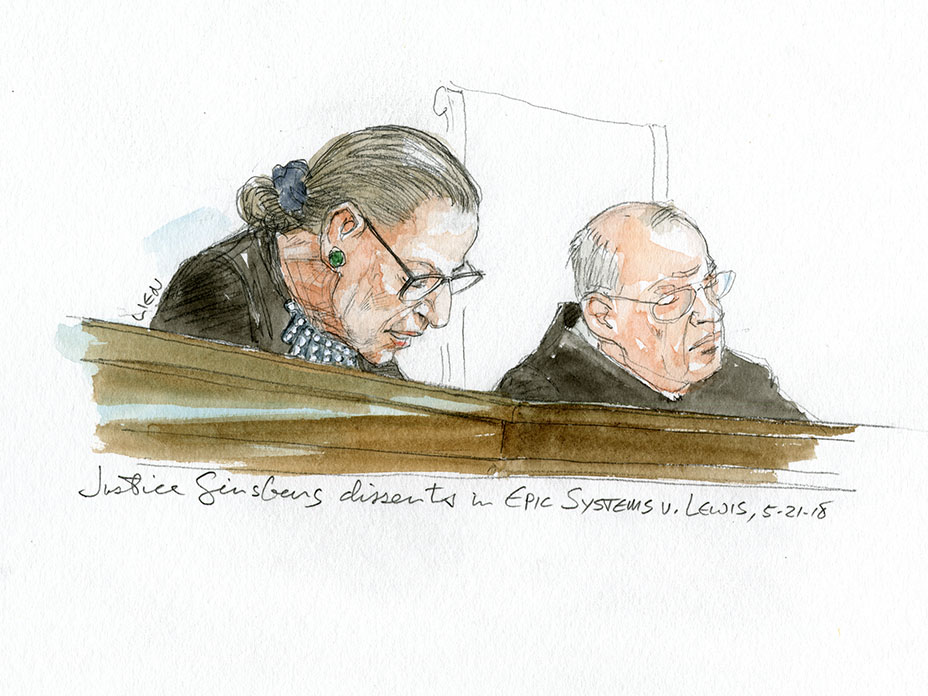 As curator, Thurston believes Ginsburg has inspired a phenomenon because “her trajectory flips the script. Traditionally women lose power as they age, and Justice Ginsburg is someone who has only gained more power and prominence with time,” even declining to step down during the Obama era. “That’s a really powerful thing for a woman not to step aside to make space for another person,” Thurston told The Hollywood Reporter, adding that the internet rewards people who are authentic and speak the truth.

When Thurston and the authors began crafting the exhibition two years ago, they didn’t know that its opening would be at a time when “the values that Justice Ginsburg has fought for her entire life, which could be summarized as equal justice and citizenship for all, would be under unprecedented assault,” Carmon said at the gallery opening.

In the beginning, Ginsburg was hesitant to open up her life to the writers, but once she understood “what we’re trying to achieve,” she granted access to her papers, Knizhnik told THR. Ginsburg loved “Notorious RBG” as a meme, Carmon said, and the book added an approach to telling history. Ginsburg approved the exhibition in a letter, below.

She said yes! When our curators received this letter from #RBG back in 2016, we couldn’t wait to start working on the exhibition #notoriousRBG with the book’s authors, @irincarmon and @shanakn. More than two years later, we’re finally almost done! This Friday, we open the show to the public. We look forward to celebrating her life and work with everyone. Many thanks to Justice Ginsburg for believing in our vision.

The overarching message from her life, Carmon said, is the spirit of perseverance. “There is a such a hunger to see women in positions of power, who are using that power to advocate for others,” Carmon added.

“Notorious RBG: The Life and Times of Ruth Bader Ginsburg” will go on tour after its time at Skirball, moving to the National Museum of American Jewish History in Philadelphia in fall 2019, then the Illinois Holocaust Museum and the Contemporary Jewish Museum in San Francisco, followed by two more unannounced institutions. 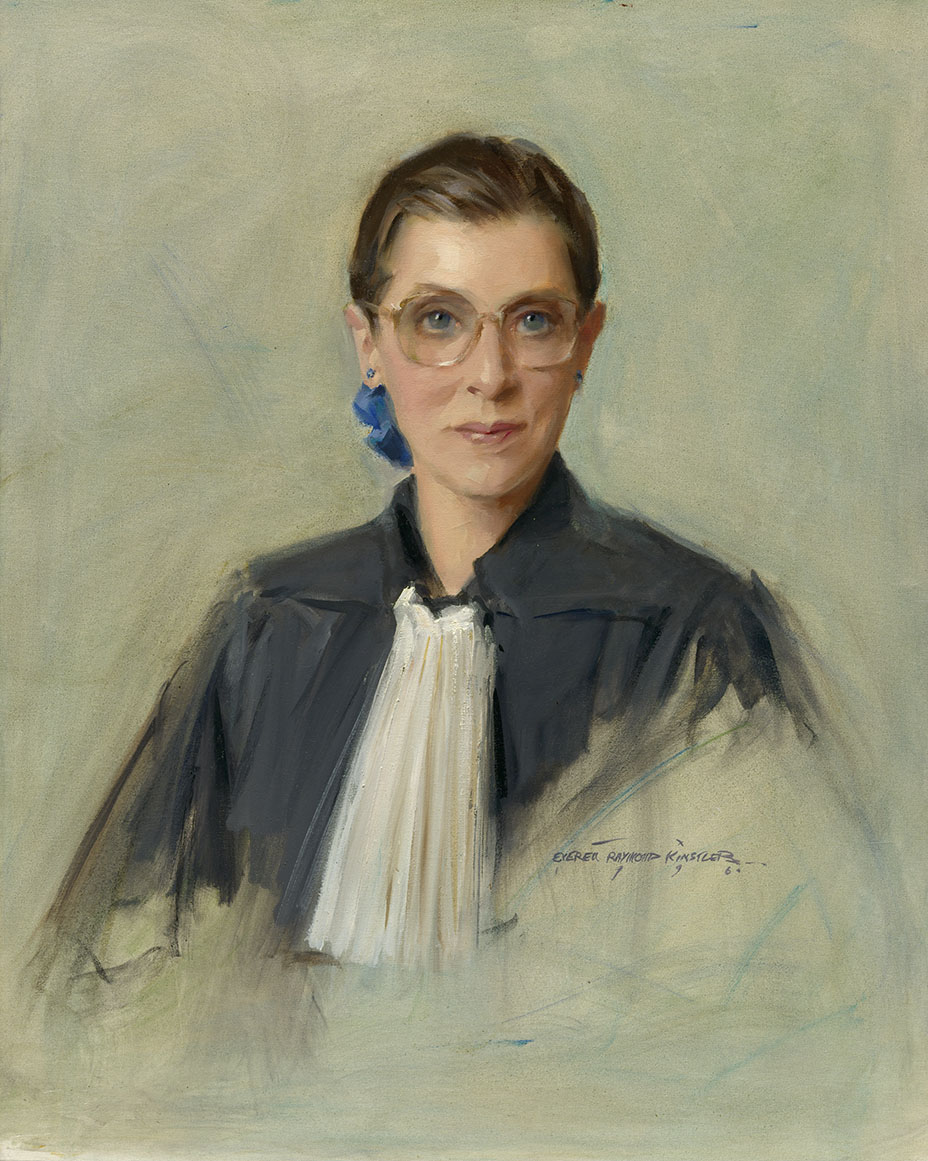