On Thursday night, the Skirball Cultural Center unveiled its latest exhibit Black Is Beautiful: The Photography of Kwame Brathwaite which will run through Sept. 1. The images on display (and three original garments from the era) focus on the cultural movements of the 1960s.

To kick off the gallery, Oscar-winning costume designer Ruth E. Carter spoke on a panel with fashion designer Mimi Plange, who has dressed Michelle Obama; Tyler Mitchell, who has trained his lens on Beyoncé for Vogue; and the photographer’s son Kwame S. Brathwaite. Carter said the collection and its message served as “an anthem to Afro future.”

“We were pushing ourselves forward in the ’60s,” said Carter (Black Panther). “We’re still doing that today. That’s what the movement was for me; Looking at clothing, African clothing. I had a sister by another mother in the neighborhood. She wore a Gele [traditional African head wrap] every day. She showed me how to wrap them with her T-shirts. I see women doing that now. We have a heritage we can be proud of. It’s acceptable and it’s beautiful.”

Carter also talked about working on a Broadway play for the first time and sent the crowd into laughter while discussing another project. “In my immediate future I’m going to be designing Coming to America 2,” she said. “I went from Wakanda to Zamunda.” 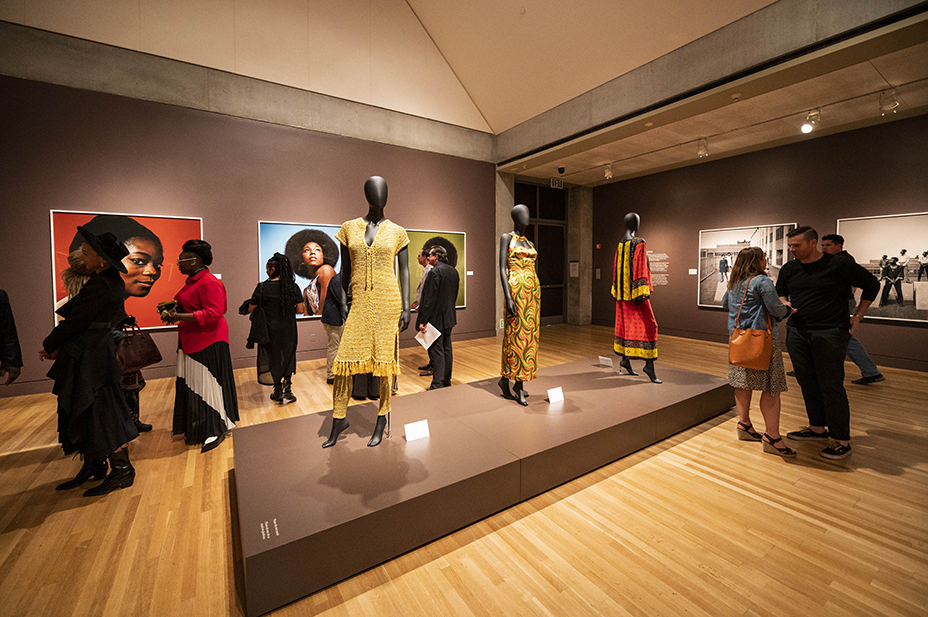 On the panel, Plange said the core of her work comes from shedding a different light on how people look at the inspiration that comes from Africa. When she was younger, she looked at Yves Saint Laurent’s interpretations of African-inspired design: “It always centered around the Maasai Tribe or around African prints that most of the time weren’t authentically African. One of the things I wanted to talk about was this idea of scarification.” She explained that her mom got a scar on her cheek at age 13, which inspired Plange to learn more about scarification marks in the Omo valley, where a lot of the markings are raised keloids. “There’s a lot of that in Black Panther,” she said.

Carter noted the influence of the scarring tradition on Black Panther.

“I feel like we’re kindred spirits,” she said, looking over to Plange. “A lot of the approach to Black Panther was in that way. Retraining the eye to see beautiful aspects of African culture in the way that they saw it.” She pointed to the Himba women adorning their hair with shea butter and clay soil and explained: “There’s a significance to me as I approach my work. I see that color and that vibrancy and I see the beauty…. Scarification in Black Panther is everywhere. Sometimes you might not even see it, but you enjoy it and you don’t know why.”

And with the discussion of black culture falling on the same day as the late rapper Nipsey Hussle’s memorial (he has been mourned by Ava DuVernay, Lena Waithe and Rihanna), Brathwaite took a moment to ask what’s next for the black community.

“Opening the door is a big part of it,” Carter noted. “For me being the first African American to win an Oscar for costume design, it’s something that in this day and age we’re still experiencing these firsts. I personally feel like I’m happy, but I think it’s really about opening the door wide enough so five and ten people can walk in and experience some of the same equality and opportunity.”

Plange said after opening the door, it’s necessary to nurture business. “When you look at a lot of African Americans, the poverty comparison to the way the majority of people are living, those are the things that really need to change in order for people to have a little more freedom to do more things.” She said if Mark Zuckerberg did not have the time and the support from his parents, he wouldn’t have been able to make Facebook. “Being able to generate wealth is the next step after the door opening.”

For his part, Mitchell reflected on Kwame’s impact on him personally, telling a story about growing up in Atlanta, “not next to Vogue or any kind of Devil Wears Prada universe” and wondering, “How could my pictures be fashion photography?”

He said, “Kwame was one of the first multihyphenates, millennials and one of the first to approach everything with equal importance and rewrite history with his camera…. To convey black beauty is actually an act of justice.”

Mitchell added that his process comes from realizing “the power of dress” and used Frederick Douglass as an example, as a frequently photographed man who understood the importance of spreading his image. “[People] didn’t know that he was collaborating with photographers and dressing himself, combing his hair and grooming himself hours before. He knew spreading this and establishing his story as a dignified black man who dresses himself and presents himself in a different way is important to changing history.”