Playwright provocateur Jeremy O. Harris brings a black, queer, blazingly transgressive voice to Broadway with Slave Play, and much of the advance hype around the uptown transfer of this New York Theatre Workshop sensation has trumpeted those qualities as an imperative for mainstream audiences to “be part of the cultural conversation.” That eye-rolling marketing blather from producers risks making it seem a manufactured hashtag hit, designed to seduce woke Manhattanites hungry for the new and the now. But this is a ballsy, often ferociously funny original work that deserves to be seen on its own merits.

Critics and culture commentators fell over themselves spewing superlatives about the play in its off-Broadway premiere, many of them eager to anoint 30-year-old Harris the Great Black Hope of American Drama with this complex work written while he was still at Yale School of Drama. There’s no doubt that, as part of the overdue movement toward greater inclusion among the kind of playwrights produced on Broadway, his arrival is a welcome blast of defiantly fresh air.

First off, though, discussing the play inevitably means revealing some of its tricks, particularly a second-act twist that radically alters the optics, even if it’s obliquely suggested by flamboyant rips in the reality fabric from the start. So if you plan on seeing Slave Play and want the unadulterated experience, stop reading now.

While I didn’t review it at the time, I had mixed feelings about the play downtown, finding it stronger on provocation than profound insight. But either the work has been sharpened in this latest iteration or it improved for me on a second viewing. It remains uneven, particularly in the indulgent over-extension of its loquacious midsection. Harris takes lofty delight in his satirical jabs at self-serving academic therapy studies while at the same time using the sterile post-grad jargon of that arena as a path toward too-tidy epiphanies for all three of his principal black characters, who are as much points on a spectrum for the playwright as flesh-and-blood figures. 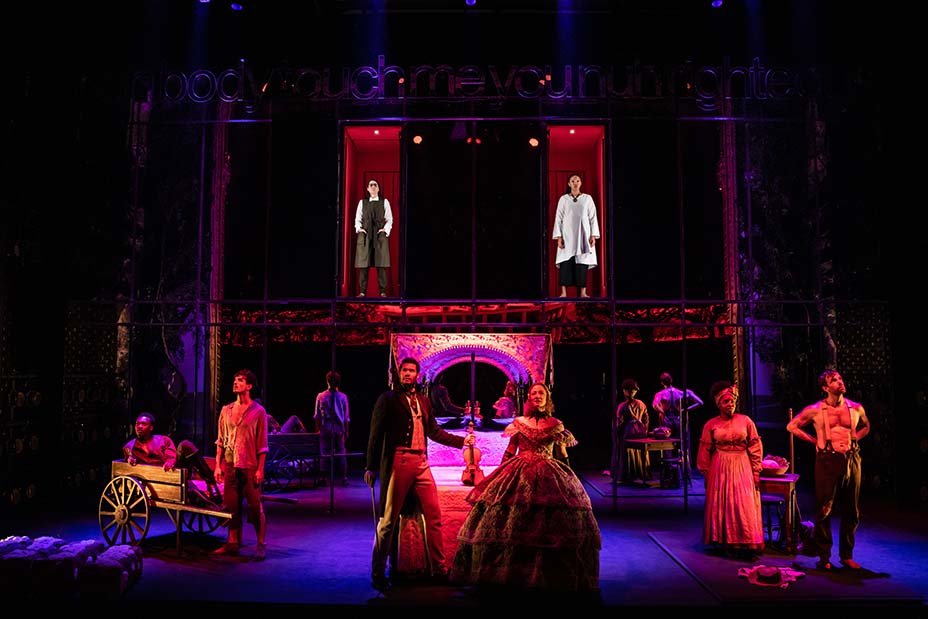 Some will balk at the grim finality with which Harris stomps on the hope of finding sexual harmony in interracial relationships — or by extension, societal balance in the uneasy intersection of black and white America. Whether or not you agree, there’s unquestionably something raw and unsettling in the playwright’s position that black identity can never be wholly separated from historical oppression. The play appears to suggest that even the most liberal white perspective, on the other hand, tends to fall back on the convenient escape of not seeing race, rather than being mindful of the painful legacy of subjugation.

The gradual shift from raunchy satirical comedy into steadily more discomforting territory is navigated with crafty assurance by director Robert O’Hara and with fearless emotional candor by his extraordinary eight-person cast. The entire ensemble has been with the production since its NYTW run, with the exception of Joaquina Kalukango, who steps confidently into the pressure-cooker role of Kaneisha, slowly revealed to be the play’s volatile emotional and psychological center.

The opening image of her distractedly sweeping the stage with a birch broom, wearing the full-skirted dress and head-wrap of an antebellum slave woman, looks like a Kara Walker silhouette come to life. But the period allusion cracks as Kaneisha starts furiously twerking to Rihanna’s “Work.” A lyric from that hit, “Nuh body touch me you nuh righteous,” is emblazoned across the top of Clint Ramos’ set, a mirrored wall in which the audience can see itself throughout, along with the panoramic view of a grand Southern plantation house.

When the white overseer, Jim (Paul Alexander Nolan), enters the scene, the sexual tension between them sizzles. But something is a little off in their rapport as Kaneisha eyes the whip in his hand with what seems more like arousal than fear. She exerts subtle control over the situation while Jim gets caught up on modes of address, insisting that calling him “Mista Jim” would be preferable to “Master,” since he’s not like the “Big House Folk.”

Moving from one vignette to the next like mechanized music-box figures, the action then shifts to plantation mistress Alana (Annie McNamara) and her “mulatto” house slave Phillip (Sullivan Jones). Demanding that he play her something on his fiddle to soothe her restless mind, she dismisses the “stuffy European nonsense” of Beethoven and insists on music “that’ll make me hoot and holla like the negresses outside.” Stripping down to her thigh-high latex boots and bondage corset as Phillip saws out the notes of R. Kelly’s “Ignition,” Alana then whips out a hefty ebony dildo, a family heirloom from her mother and grandmother before her, to show Phillip who’s boss. 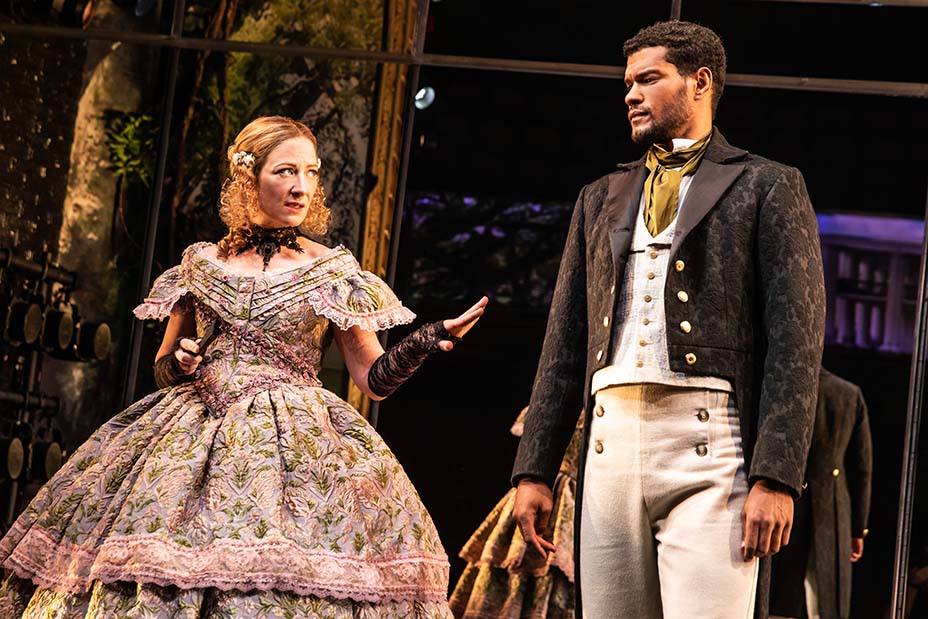 As an opening act, all this certainly makes an impression with its outrageous political incorrectness and anachronistic pop playfulness applied to culturally sensitive depictions of race-based domination and submission. In its grasp of multilayered performance to explore racial identity and perception, it shares some DNA with director O’Hara’s own tantalizing assault on stereotypes, Barbecue. But the abrupt swerve when Jim halts the action by yelling the safe word “Starbucks” steers Slave Play closer to the terrain of Jackie Sibblies Drury’s Pulitzer Prize-winning Fairview, which repeatedly pulled the rug out from under audiences with its seismic shifts in perspective.

The distended second act (the play is performed without an intermission, running just over two hours) brings the action careening into the contemporary world while ushering in a fourth interracial couple — and this is the very final spoiler alert if you want to retain the key element of surprise.

Tea (Chalia La Tour), who is black, and her partner Patricia (Irene Sofia Lucio), who reads as white but retouches her Latina roots when it serves her point, are conducting a study in “Antebellum Sexual Performance Therapy” that they began at Smith and continued at Yale. Kaneisha, Phillip and Gary have been chosen to participate because of their inability to feel sexual pleasure, or anhedonia, a word spouted not once but five times by these broad caricatures. Their subjects’ dysfunction includes panic attacks, social anxiety, OCD and “acute musical obsession disorder,” hence the nods to Rihanna, etc.

(The attendance of RiRi and posse at a recent performance was treated like the Second Coming, not least by the playwright, who was quick to defend the pop diva’s widely criticized late arrival and cellphone use during the show. His profile on social media and in fashion circles suggests Harris is no less attentive to building a career as a celebrity influencer than he is as a dramatist; his other play produced in New York last season, Daddy, was an undisciplined embarrassment.)

Even if the midsection pops the hilariously uncomfortable balloon of the opening, it’s nonetheless drolly clever — a little too much so at times. But the skill of the director and actors at lacing sardonic humor with authentic feeling unexpectedly lends both weight and buoyancy to the subjects’ various illuminating insights.

The umbrage of Dustin, an actor, over being identified as white, rather than just a couple shades lighter than Gary — he refuses to “dignify” questions about his ethnicity with a response — makes him feel stigmatized. He fails to see the ways in which Gary has spent the 10 years of their relationship treating Dustin like a prize, Gary’s own self-worth becoming a sad afterthought. 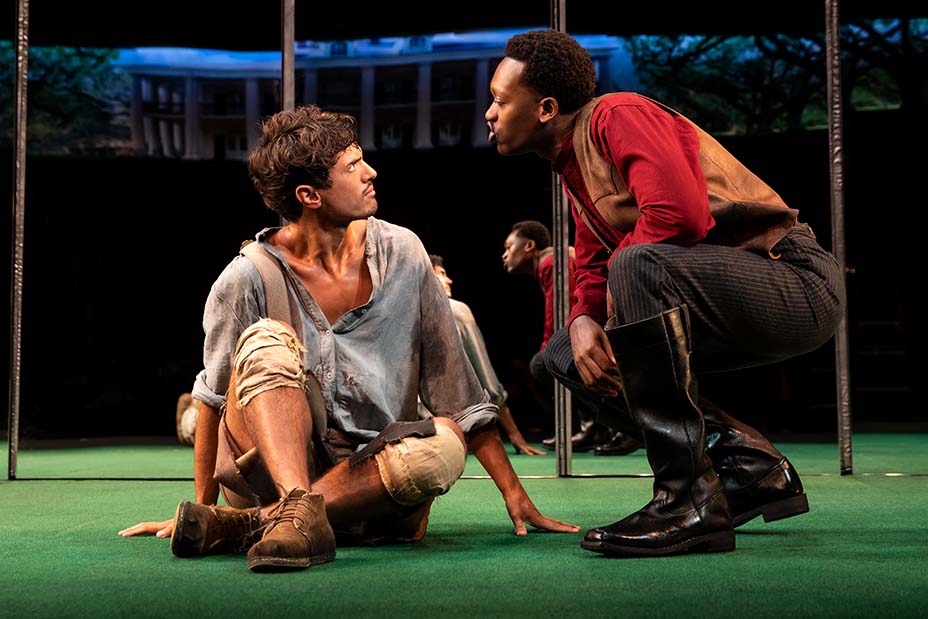 In hands-down the production’s two most amusing performances, McNamara’s Alana congratulates herself on her diligent application to the study’s deep-dive homework, while Jones’ Phillip struggles to pin his performance issues on hang-ups connected to race, having always seen himself as “Just a hot guy who’s not exactly black or white.” Admiring his reflection in the mirror, he adds, “I’m just Phillip. And Phillip’s like this super-human dude who’s beyond, like, black and white. You know?” But the relaxed swagger of the hunky jock makes his slow-dawning realization all the more effective as he finally connects his desire to his blackness.

The myopia that places Kaneisha, Phillip and Gary “in the blind spot of their nonblack partners” extends also to Tea and Patricia. The couple’s imbalance is conveyed in flickers of irritation as patronizing Patricia blithely talks over Tea, but these characters are the play’s most overworked constructs, more like sketch devices than real people.

The most emotionally penetrating reckoning is granted to Kaneisha and Jim, not least because, beneath the exaggerated Southern drawl of the plantation role-play, Jim is British. He’s too squeamish to comply with “slave” Kaneisha’s request to be called a “nasty negress,” but fails to understand why she flinches when he justifies his reluctance by calling her his queen.

The sobering final act, which deftly pulls everything together, is given over to the uneasy fallout for that couple of the therapy experience. While all the nonblack characters — with the exception of tiresome Patricia, who’s too busy “processing” everyone else’s thoughts to self-examine — are forced to consider their ingrained sense of white supremacy, a chastened Jim vows just to sit still and listen. As she talks, Kaneisha’s powerful voice emerges through shame and humiliation to wounded anger, recalling being the only black girl on school field trips to Virginia plantations, protected from the demons in the walls by the spirits of the elders looking down on her.

Jim’s physical response, giving her what he thinks she’s been asking for, is disturbing, and while it’s open to interpretation, seems to spell doom for any ongoing reconciliation between them. It ends Slave Play on a shattering note that would be hard to predict based solely on the irreverent first act. The play doesn’t match the impact of the more artfully subversive Fairview, which left audiences reeling with its stark exposure of the distorted way black people are seen by whites. But the talented Harris has a daring point of view that can’t be ignored.