In Snatched, Goldie Hawn and Amy Schumer portray mother-daughter vacationers who pack outfits for lounging by the pool and twerking, but also end up wearing them while trying to escape kidnappers in the jungle.

The actresses relied on Leesa Evans, who has emerged as the go-to costume designer for hip comedies such as Bridesmaids, Get Him to the Greek, Trainwreck, Zoolander 2 and the Neighbors franchise. In addition to using paint and batik to dirty the clothes for the film, which was directed by Jonathan Levine (Warm Bodies, 50/50) and written by Katie Dippold (Ghostbusters, Parks and Recreation), Evans also created an indigenous-style cloak that Schumer improvised a whole bit around, describing it as “something Kanye would design.”

The bicoastal costume designer does double duty as a celebrity stylist, and counts Schumer and Russell Brand as clients. Before dressing Schumer in a custom Antonio Berardi dress for the film’s premiere Wednesday in Los Angeles, Evans chatted with The Hollywood Reporter about her approach on the film, her KonMari-like philosophy to editing wardrobes in real life and the importance of wearing sweats.

What’s your approach to dressing people who do physical comedy and sometimes don’t care how they look as they try to make people laugh?

The approach is always to find the imperfectly perfect version of any character a comedian might play. 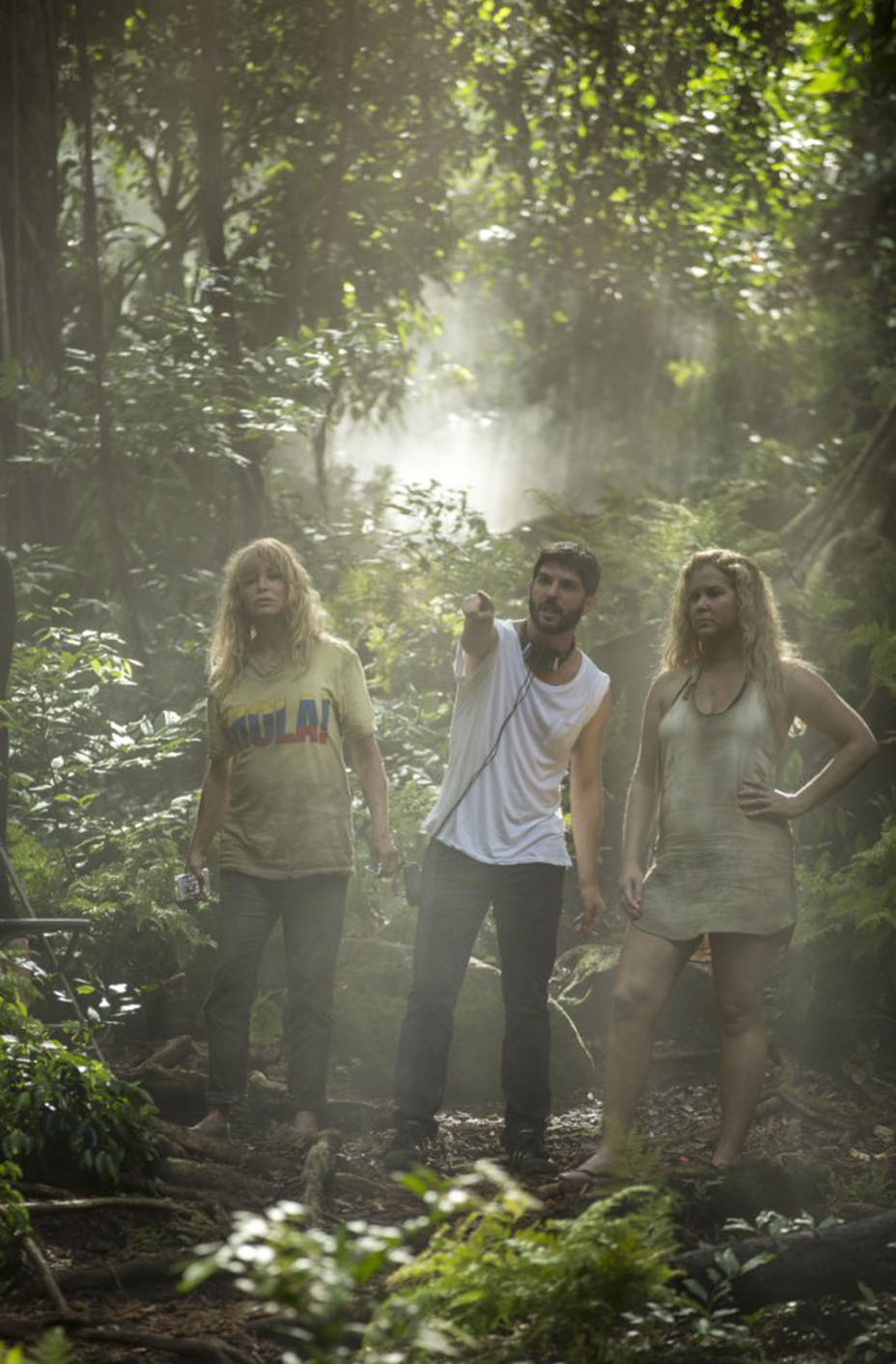 How did you dress Goldie Hawn and Amy Schumer as mother-daughter?

Amy’s character goes off on different adventures, and Goldie’s character used to go off on different adventures but has now settled into being a homebody. Goldie’s character used to have cool things and we pulled from there. What did you used to wear when you went to South America in your twenties? … I grew up in a family myself that traveled a lot. [Goldie’s] family traveled a lot. We had a similar viewpoint of people who traveled a lot in the 1970s and had cool vintage pieces. In the beginning, she wears these mukluk slipper socks. I remember having those as a kid. Her jacket when she first arrives at the hotel was reminiscent of a gauzy coat that my mother had when we were kids and she traveled to Colombia. It was really bringing these things back that I remembered. 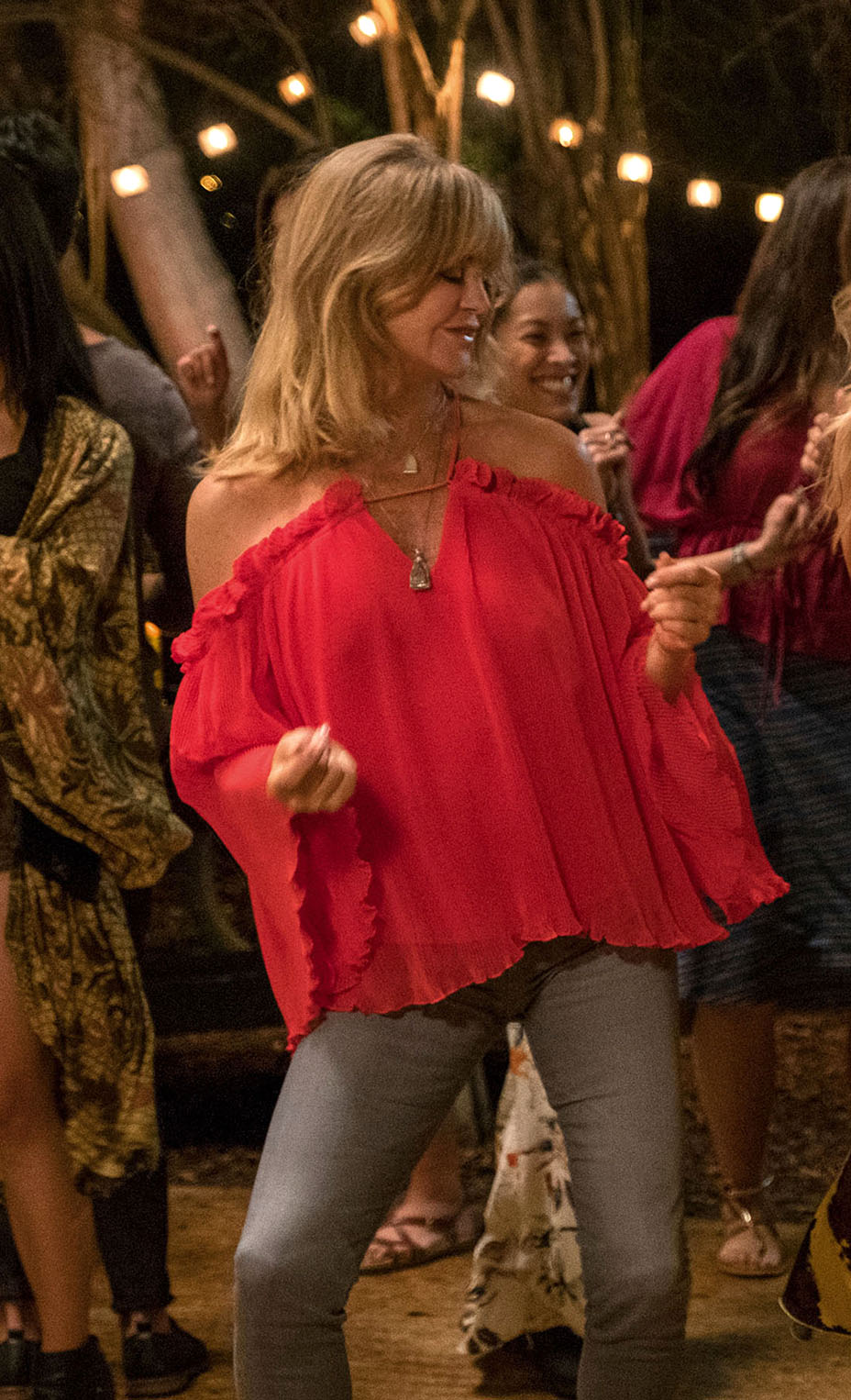 Goldie also has such a boho personal style. Did you pull anything from her personal wardrobe for her character?

I didn’t pull anything from her personal wardrobe. But Goldie’s natural style helped influence who the character was and why she wore what she wore. 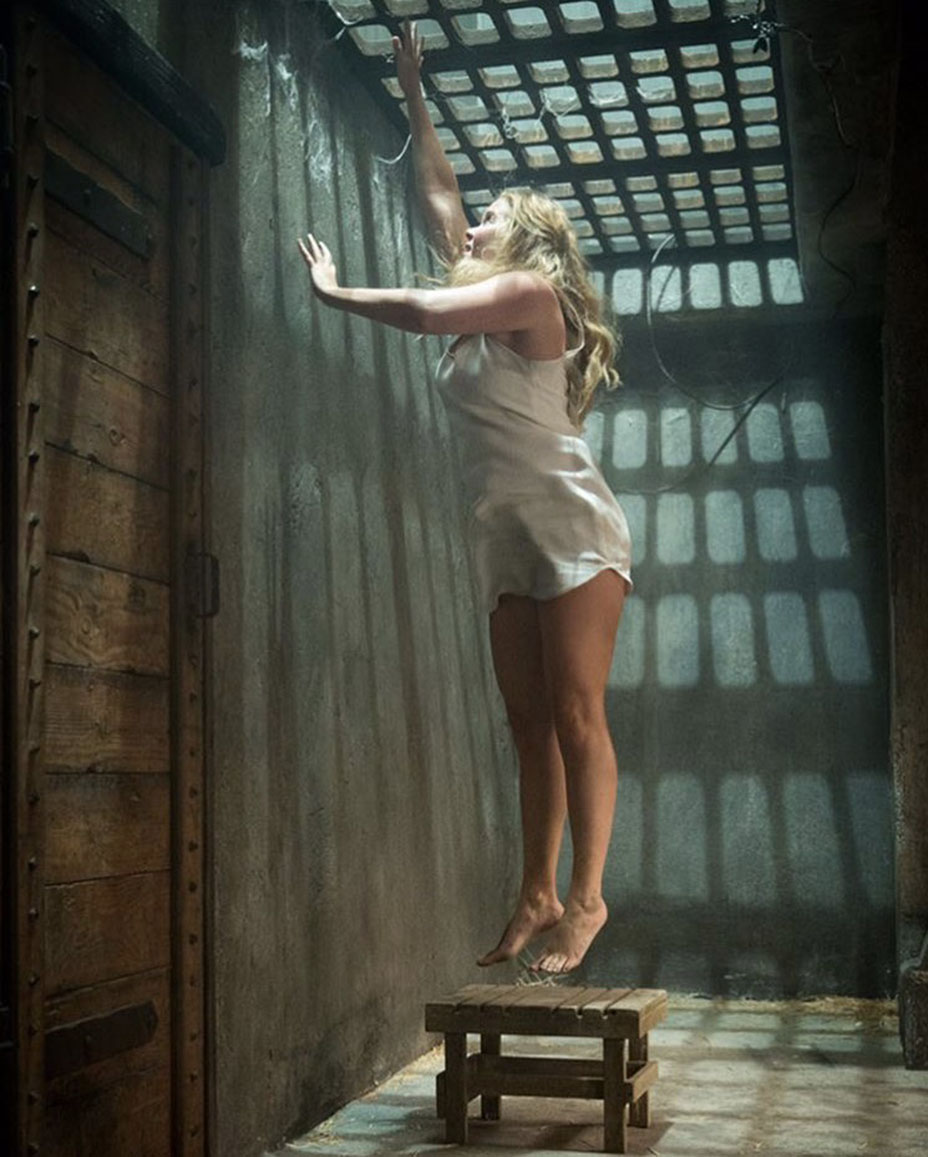 And for Amy’s character?

She works in some sort of fashion retail place. She likes fashion. She has a little bit of fun with it. She wants to dress cool and have a rock ‘n’ roll boyfriend and all of these things. At first, when she goes on vacation, she takes all these things she would look really hip and cute in, like these flip-flops that were ridiculous for trekking in the jungle. 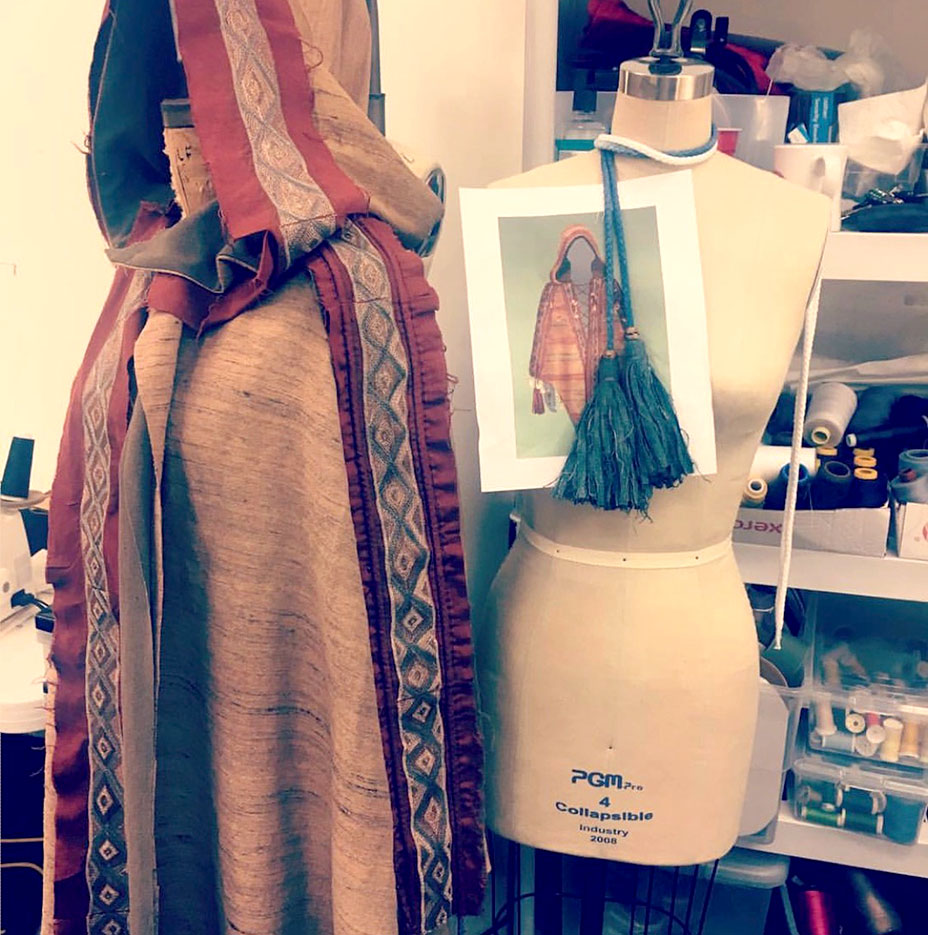 How did you come up with that cloak that Amy’s character described as “something Kanye would design”?

Amy is really quick and very witty. That was her improv interpretation of it. I made that cloak, taking a lot of reference material from different indigenous tribes. Playing with the fabric and the shape and the embroidery was a fun little project to do. 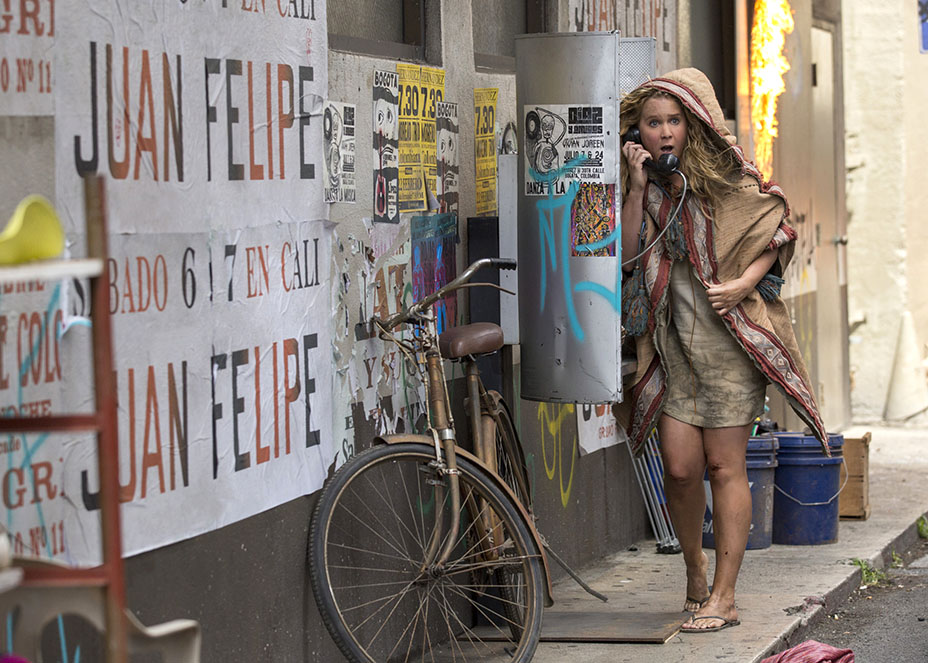 Why did you want to dress Amy and Goldie in the kitschy T-shirts printed with the kittens and with the Spanish word “Hola?”?

The idea was that Goldie had these shirts as souvenirs from her travels. Somehow she had that kitten T-shirt. Then Amy putting that kitten T-shirt on in her house seemed kind of silly. In the script, you see Goldie’s character had cats. It set the tone for this little bit of comedy in the clothing. 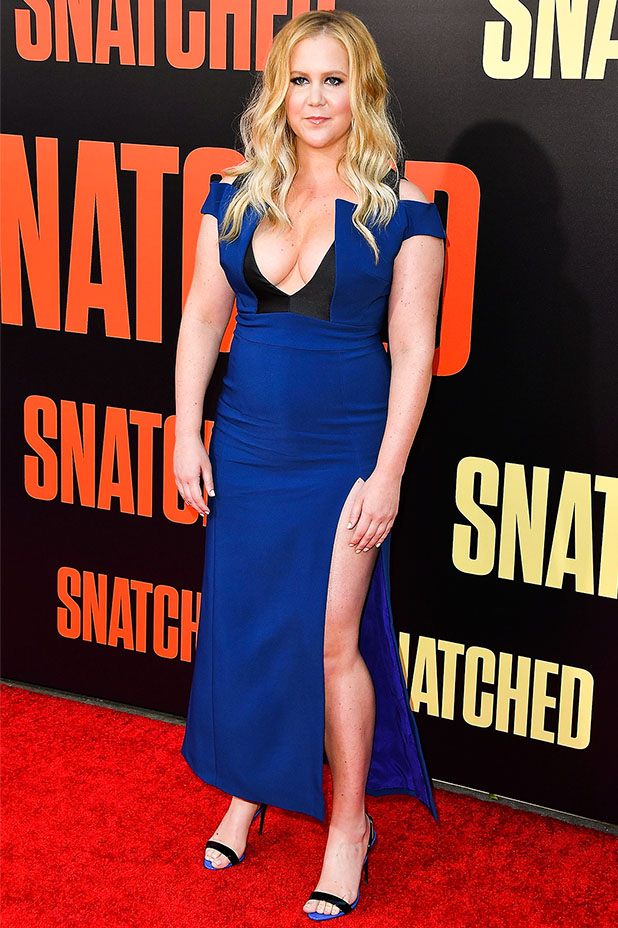 How did you meet Amy and start collaborating with her?

Judd Apatow introduced us just before Trainwreck. Through the course of shooting Trainwreck, Amy developed a different relationship with clothing that she had before. She started enjoying clothes and loving the process of getting dressed. It was something that I think she wanted to continue in her personal life. That’s really how it happened.

I work a little bit differently than a lot of stylists do, where I don’t just do red carpets and events. I do someone’s whole life because I really believe when you feel confident in what you wear everyday, that translates to feeling confident across the board. That confidence makes you feel happier and have better connections with people. Amy hadn’t had that opportunity to play with fashion before that point.

What did she wear before you started to work together?

How do you finesse her style and that of your other celebrity clients?

Are you the Marie Kondo of celebrity stylists?

(Laughs) I don’t disagree with what she says. I believe too much clothing creates chaos and clutter. I also really think that people feel fashion is a complicated and intimidating process. In reality it can be really simple and it can turn into something that you have fun with. That’s the thing: I just want to support people in the feeling that they are their best selves. I’m not out there chasing the designer of the moment. I love designer clothes. I love and respect fashion designers so much and embrace fashion as art.

Were you the one who put Amy in that black leather catsuit for her latest Netflix comedy special?

Amy does look cute in a pair of leather jeans and she wears them in her standup often. The leather jumpsuit for the special — that was just a fun idea of pushing the envelope.

What labels does she like and what do you try to dress her in?

For the New York screening, she wore this amazing Valentino dress. On the MTV [Movie & TV] Awards the other night, she wore a custom A.L.C. dress. It just really depends. Those are really different price points. Both of those brands are amazing that she and I love. I will shop anywhere for myself and my clients from vintage stores to high-end boutiques and everywhere in between. For me, it’s about shape. If it’s a great shape, it doesn’t matter how much it costs.