As Saturday Night Live returned for season 46 this weekend, its Chris Rock-led opener was being celebrated far from Studio 8H.

Across the country, NBC held its first-ever drive-in premiere for the show on Los Angeles’ Universal Studios backlot, complete with a faux red carpet and marquee announcing Rock as host and Megan Thee Stallion as musical guest. The night marked a rare, and possibly the only, time the legendary New York show has held a formal premiere on the West Coast, kicking off at 8:30 p.m. to account for the time change.

Upon arrival at the lot — which backs up to its still-closed theme park — guests had their temperatures taken and were instructed to keep their masks on whenever exiting their vehicles. They were then guided to, fittingly, the New York Street area of the lot, where they were given swag bags of SNL-branded merchandise and taken to a drive-thru red carpet for a photo opp under a “Live from New York … it’s Saturday night!” sign.

Once parked under the screen (which projected the show on artificial New York brownstones), Universal staffers brought over bags of treats, along with a mobile snack cart of candy and soda that could be summoned with the push of a personal button. Before the show went live, the drive-in aired a series of classic SNL skits including “Mom Jeans,” “Two Wild and Crazy Guys,” “More Cowbell” and “Target Lady.”

The small event, which was limited to less than 30 cars and closed to the general public, included guest Danielle Haim — frontwoman of band Haim — whose music videos are often directed by Paul Thomas Anderson. This partnership has led to a public friendship with Anderson’s wife, Maya Rudolph, who made her return to SNL as Kamala Harris on Saturday and whom Haim shouted out for her performance on Instagram. 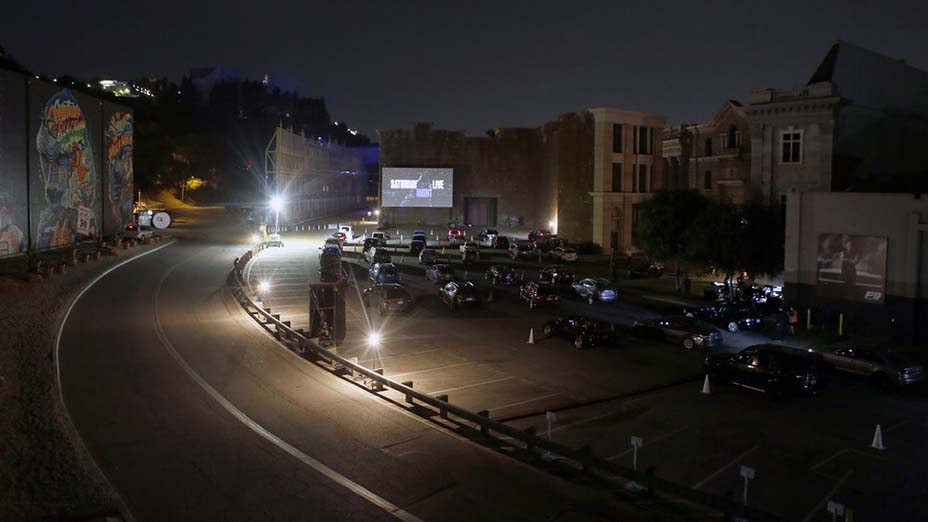 Castmembers Kenan Thompson and Heidi Gardner sent video messages to the drive-in audience, appearing just before the cold open as Thompson announced, “the countdown to the premiere starts right now. Enjoy!” and the NBC announcer told guests to “recline your seats, enjoy the snacks and live from New York it’s the season 46 premiere of Saturday Night Live.”

As the show got underway, honks rang out in place of applause following Rock’s monologue, Megan Thee Stallion’s symbolic performance and Kate McKinnon’s brief Ruth Bader Ginsburg tribute, and commercials were replaced with SNL fun facts about previous castmembers and the history of the show. Following Rock’s goodnight, cars quickly returned their snack-calling buttons and were led off the lot. 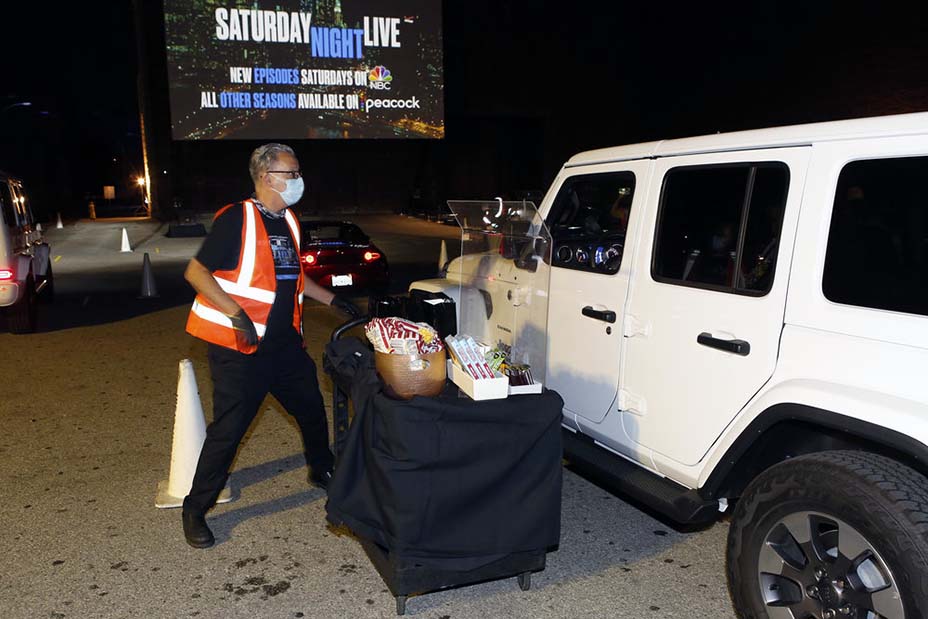