Sofia Coppola took the 1971 Gothic thriller The Beguiled and transformed the male-centric tale into a story focused on the women (played by Nicole Kidman, Kirsten Dunst and Elle Fanning) who were left behind during the Civil War, then visited by an injured soldier (Colin Farrell). Ahead of being honored with the director tribute at the Independent Filmmaker Project Gotham Awards on Nov. 27 (hosted by John Cameron Mitchell, the event also will present 10 competitive awards), Coppola, 46, spoke to THR about crafting the female gaze and dipping into new mediums.

Reboots and remakes are trendy in Hollywood, but you managed to retell an old story and highlight new, universal themes.

Most reboots come from a commercial thinking, a businessperson saying, “We need to remake this movie.” This was from my creative interest to tell this story, but in my way. I appreciated the original movie, but I tried to forget it — I would never try to replicate someone else’s work. It was the challenge of finding a different point of view: taking this genre movie, which is about a group of women in an extreme situation but told from a guy’s point of view, and tell it instead from their point of view. These isolated women were raised to depend on men and servants, who were all gone; they were trying to hold on to this lifestyle that’s obsolete.

It’s also taking something that was treated in a campy way and, while still having fun with it, taking the emotions of these characters seriously and treating them like complex humans — full, multidimensional people. It’s challenging even today to get a movie made that’s a group of women with one guy who is the object. I was happy it connected with some people, and I feel like that’s all you hope for. I try to do what I’m interested in, and you’re happy if anyone else sees it in that way. And I try not to read too much about my movies because I’d be too self-conscious to make any.

How was the movie’s female gaze aesthetically created?

We really put a lot of focus on the costumes and the art direction for this very feminine point of view. Everything is lacy in this Southern ladies’ world, and when Colin Farrell first comes in, it’s very nonthreatening. Then, as the story slowly progresses, the visuals change as well. We took away the soft pillows and gave them scratchy blankets. Their house was actually falling apart as they’re trying to keep out this other era that’s coming in.

And so much of it is just the tone and atmosphere on the set — we play music; there’s no yelling. The art department, the costume designer and a lot of the crew were women, because I like working with women. The cinematographer [Philippe Le Sourd] is a man, but he is a very sensitive man! 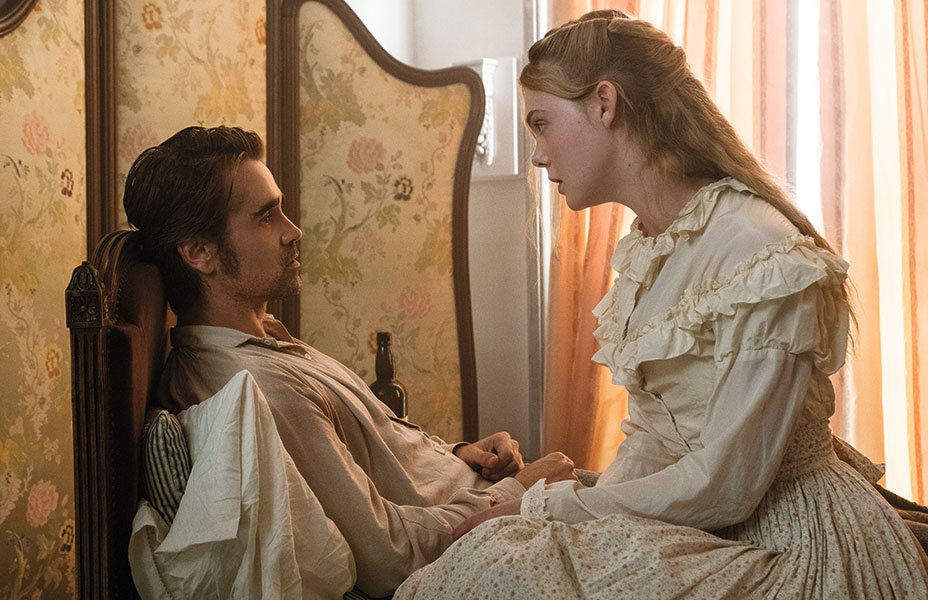 You also directed your first opera, Rome’s La Traviata, which hit the big screen in the U.K. this summer. Did you learn anything new for future film projects?

I’ve never worked in live theater before; it was something I was scared to do. So I learned a lot about the value of risk and how rewarding it can be to just push yourself and do something out of your comfort zone. And it’s just so nice to be with people in theater — they don’t get paid a lot in theater, so they have a lot of heart and love and sincerity. There’s just something pure in the teamwork of these people coming together because they love it.

You’ve done comedies, drama, genre, music videos, shorts, ads and live theater. Anything you have yet to try?

There’s a lot I haven’t done, so many genres that I’ve never done that I don’t know. And I have a soft spot for an old-fashioned miniseries — I know they’re called limited series now, but when I was a kid, “miniseries” was a glamour event. I don’t know if I would do one, but I do think it’s interesting that when you adapt a book into a film, it’s so limited, [and with a miniseries] there’s more flexibility with how much time you can cover.

Would you ever make a studio movie?

I would be open to it. You know, who knows? If there were a project that I really connected to and I felt like I had the creative freedom. It’s hard to have creative control when there’s a lot of money at stake. I don’t have any plans to, but I am open to doing different scale projects if I felt like I could really do it my own way. Right now, I have some writing projects that I want to get to. That’s always my starting place for a film, just working on the story I’m interested in making.

You’ve been in the industry for many years. How do you feel about the recent flood of sexual harassment allegations?

It’s good that all these people’s stories are coming out, and people are listening. There is an element of this industry that’s been tucked away for a while, so it’s good that people feel like they can express that.

What’s your advice for someone entering this industry?

Like any world, there are trustworthy people and not. You just have to look for them, and beware that there are other sides to that industry.