Continue to The Hollywood Reporter SKIP AD
You will be redirected back to your article in seconds
Skip to main content
August 2, 2017 3:20pm

“Sonya Alone” is a standout ballad of Natasha, Pierre & the Great Comet of 1812, the Broadway musical that recounts 70 pages of Leo Tolstoy’s War and Peace as an immersive electro-pop opera. Sung by Natasha’s distraught cousin Sonya, the heartbreaking number has a singer-songwriter sound, and is incredibly reminiscent of the catalog of Ingrid Michaelson. The Hollywood Reporter’s chief theater critic David Rooney wrote that it is “arguably the musical’s most beautiful song … I would see the show many times over for that one song alone.”

Now Michaelson herself has joined the musical at the Imperial Theatre through Aug. 13, while Brittain Ashford, who originated the role, takes a temporary leave from the show. “I’ve seen a lot of Broadway shows and went to school for musical theater, but I’d never seen anything like it,” says the musician of first watching Dave Malloy’s production. “It’s so different and textured and complex. I was seated on the stage and could see into the mezzanine, and I felt enraptured by everything. I realized pretty quickly after college that I didn’t have the ‘traditional Broadway voice,’ but I think Dave writes for people like that. I fell in love with it from the first time I saw it, and then it became a reality.”

Michaelson goes Off Script with THR to talk making her Broadway debut, climbing up and down all those stairs, and getting advice from her boyfriend, stage regular Will Chase.

What do you admire most about Sonya and her song?

Her selflessness is so beautiful and unique. She just loves her cousin so much and wants to protect her. And her song is all about how she’s gonna do that. It’s one of the only times I’ve been watching a show and felt a kinship to a song. It’s a sweet sentiment, and there aren’t a lot of songs, especially pop songs, that [discuss that]. It really stuck with me — as soon as I saw the show, I went home and learned how to play it on the piano that night. I’m sure I’m going to be doing something with it [on tour]. 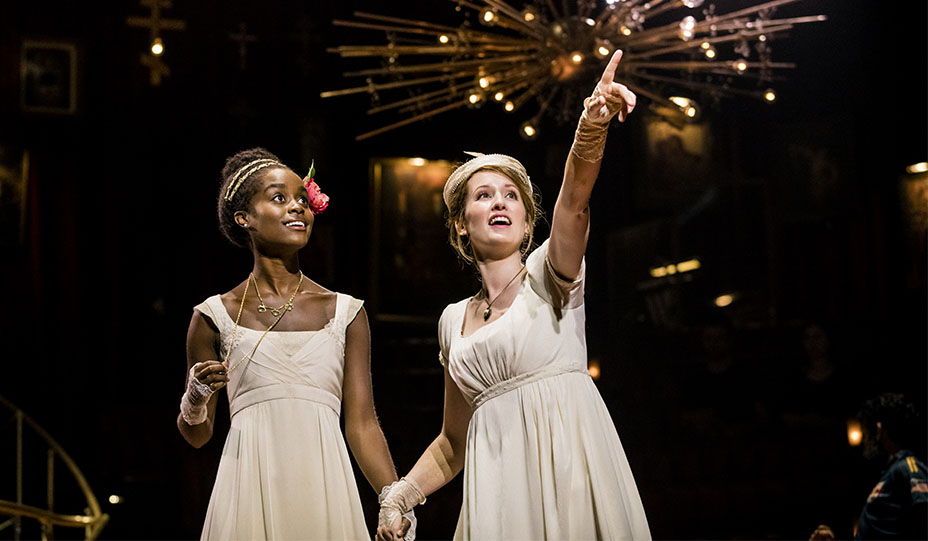 It’s the hardest thing I’ve ever had to learn. I was really nervous there wouldn’t be enough time, because this music is so difficult. I started to learn the music on my own — like, “in case it happens …” — so by the time we were in rehearsals, I pretty much knew most of it. Then it was about the blocking and choreography. The “Balaga” number is probably the hardest — I’m up in the mezzanine and going upstairs and downstairs and engaging with the audience and handing out shakers. And the prologue is tricky because you have to be in certain places for lighting cues. I was driving my boyfriend crazy because I was just doing it over and over again in the living room every night.

What advice has Chase given you about Broadway?

I would have these anxiety attacks about the short rehearsal period, and he was just like, “I promise you, if you keep working at it, you’ll have more than enough time.” He was a very calming, reassuring voice, and was very proud and supportive. It was invaluable to have somebody who has done this many times breathing for me, because it does seem so insurmountable.

What new habit have you adopted for the role?

I’m doing a lot more stretching than I would before my own shows. I have to physically warm my body up because there are so many stairs. And as many stairs as you see onstage, in the mezzanine and all throughout, there are that many backstage. It’s is just like an [M.C.] Escher painting. They have a physical therapy person who comes in and massages you and tells you different stretches to do because the stairs really do wreak havoc on people’s knees and hips.

A picture of my momma, who passed away almost three years ago, in this frame that hangs from my mirror. I look at it before I go out onstage, and it’s like she’s there with me.

How does the stage door compare to your concert meet-and-greets?

When it’s my show, there’s all of this pressure — I know they’re waiting for me and I have to go at a certain time. With this, they’re there for everybody, and the fans of this show are hardcore! Everyone is saying, congratulations on being on Broadway — I haven’t been in any sort of musical or play in 16 years or something like that, so the fact that people are shoving playbills in my face is crazy. I still don’t think it’s going to really sink in until I’m done.

What do you do before and after a performance?

I’m going to sleep a lot later because I’m eating after the show and I’m awake for a couple of hours. It’s very similar to a tour, except it’s this new kind of weirdness because I’m home every night.

The time during the day when I’m actually awake is only like four or five hours, and I’m just taking a shower, running errands and going to the theater. I really admire all of these people in the show who get up and play softball and go to the gym. Maybe I need more sleep than those people, but I need eight hours of sleep at least, otherwise I can’t function.

Will Casting Controversy Hasten the Closing of Broadway's 'Great Comet?'

What do you do on your days off?

I live pretty near Prospect Park — if it’s not hot, I love to go in and just be in nature. It’s so huge and there are so many different places you could go to that it never gets boring, because you’re always meandering in different ways.

What were some of your favorite musicals while growing up?

I was in a kids acting group that did modified versions of The Mikado and Pirates of Penzance. And I didn’t really see a lot theater growing up, but I watched Easter Parade and White Christmas and Top Hat over and over again. That was where I first fell in love with musicals — through movies.