California has lured another big-budget feature.

Warner Bros.’ Space Jam 2 — the long-awaited sequel starring LeBron James and produced by Ryan Coogler — will film in the state. It’s the latest on a growing list of big-budget movies that are choosing to film in California over locales that often offer more aggressive financial incentives.

Space Jam 2 is one of 15 film projects — 10 non-independent, five indie — that have been selected to take part in the state’s incentives program in its latest allocation round. Others include Andy Samberg’s Palm Springs, Universal’s Marry Me and 24/7, Lionsgate’s Margaritaville and 20th Century Fox’s The Boy Who Knew Too Much and Mouse Guard (see below for full list.)

What’s notable is that at least five of those films plan to shoot outside Los Angeles’ 30-mile zone, which has been a big initiative of the revamped program. In fact, four of the out-of-zone projects (Janis, Cry, Baby, Lexi and Luminous) will shoot in the San Francisco area, while Palm Springs will film in the namesake desert resort city.

“One of the goals for Program 2.0 is to bring production jobs and spending to regions across the state, and we’re beginning to see that happen more often and on a larger scale,” said the California Film Commission’s executive director Amy Lemisch. “We’re thrilled to see Program 2.0 have such far-reaching benefits.”

“I’m thrilled to be shooting in my home state of California,” added Samberg, who will produce and star in Palm Springs. “Not only was I born and raised here, but, as everyone knows, the California Raisins were a major creative influence, which I think will definitely rub off on this production.” 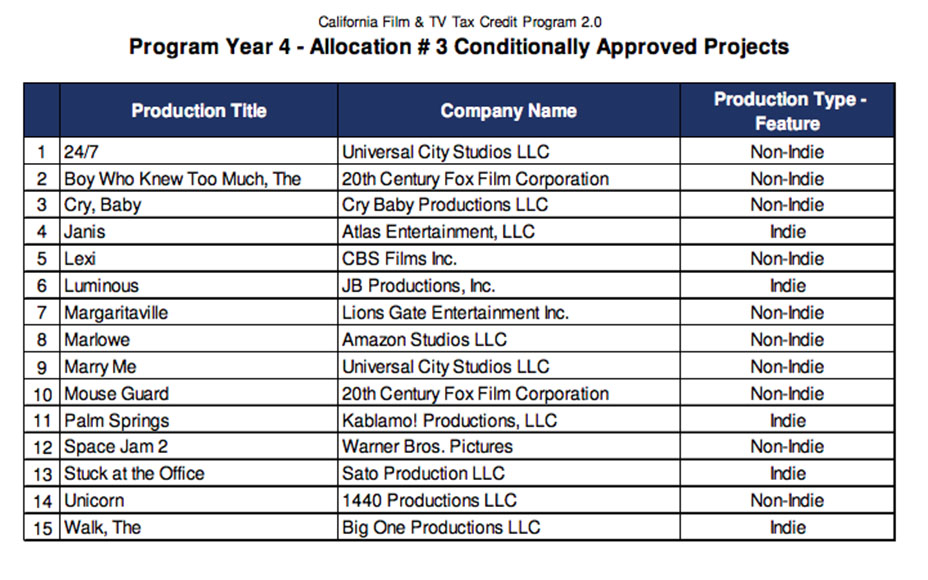