Continue to The Hollywood Reporter SKIP AD
You will be redirected back to your article in seconds
Skip to main content
January 14, 2021 8:00pm

In a normal year, American Cinematheque’s marquee fundraiser would have been a glitzy affair with big stars, a packed red carpet and sleek clips reels. Onset anecdotes would have flowed from the stage as heavily as champagne, and the event would have closed with a gracious acceptance speech from the night’s sole honoree.

With the COVID-19 pandemic still raging, this is not a normal time. Los Angeles, home to American Cinematheque and its event, remains the epicenter of the outbreak so large-scale gatherings have been nixed. The organization, like so many others, opted for a virtual presentation Thursday night to honor Spike Lee with the 34th American Cinematheque Award.

In doing so, event producers switched up the format. Oscar winner and past American Cinematheque honoree Jodie Foster served as host and was also tasked with moderating a lengthy Q&A with Lee that stretched over the nearly 90-minute program. It was interspersed by casual conversations that paired Lee’s many collaborators and concluded with the award presentation from the cast of Lee’s latest, Netflix’s Da 5 Bloods, with Jonathan Majors, Delroy Lindo, Isiah Whitlock Jr., Clarke Peters and Norm Lewis.

“There are filmmakers that create entertainment for the world and there are those that create commentaries to our world,” said Majors. “Personally, I don’t know another person that so naturally and so honestly creates both.” Majors then said it was time to present the trophy but not by hand because “Dr. Fauci says so.” 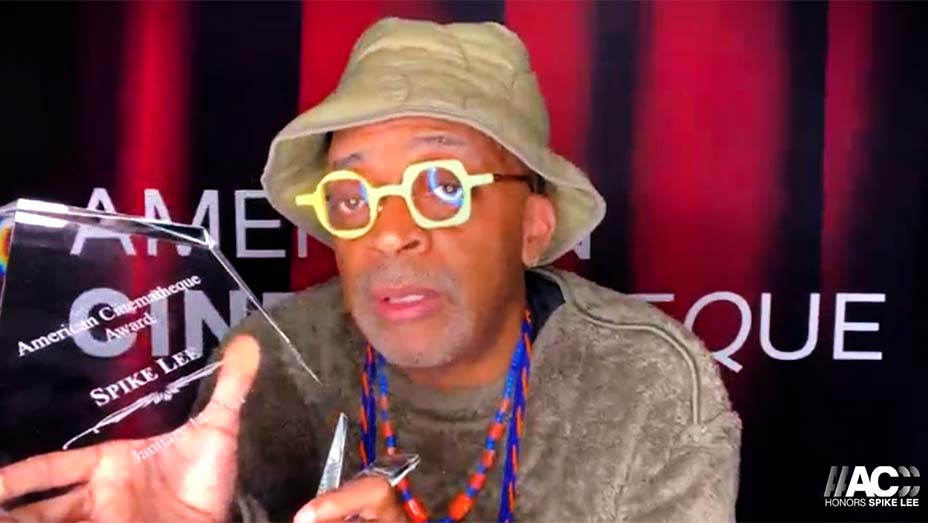 Lee, dressed casually in a bucket hat with his trademark glasses, kept his speech short and sweet. He thanked all collaborators in front of and behind the camera over four decades. “You know I love you,” he said, adding, “Thank you for the support you have given me over the years. Let’s keep it going.”

That closed the show but nobody could fault Lee for keeping it brief because, by that point, his Q&A with Foster had covered so much ground. After praising her “magnificent” friend’s work as a filmmaker, teacher and social commentator, Foster, who starred in his 2006 film Inside Man, asked Lee how it felt to be receiving something like a lifetime achievement award. “I’m 63,” he said, noting his birthdate as March 20, 1957, the first day of spring. “Here’s the thing, though, if you love what you’re doing, you can delay Father Time. I got some more joints to make.”

She also asked about the reception to his work and Lee said he knows that a lot of his films did not connect with audiences straight away, citing Bamboozled and 25th Hour as examples. But “sooner or later, people will catch up,” he added. Lee also said he caught up with how to work well with actors by his third film, Do the Right Thing. He credited School Daze star Laurence Fishburne with providing valuable input on the process. “We had a couple of discussions and he was dissatisfied with my language to him and other actors because he felt, rightfully so, I wasn’t giving what they needed. But I didn’t know any better.” 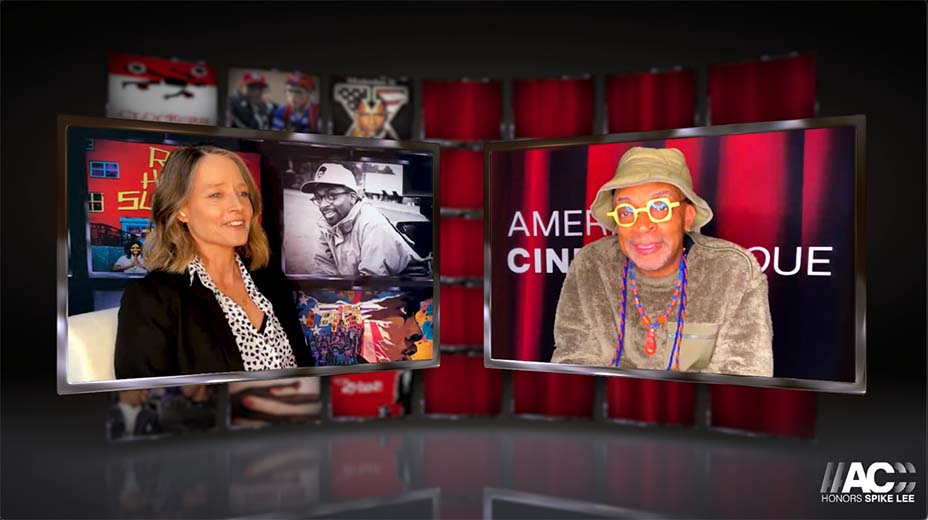 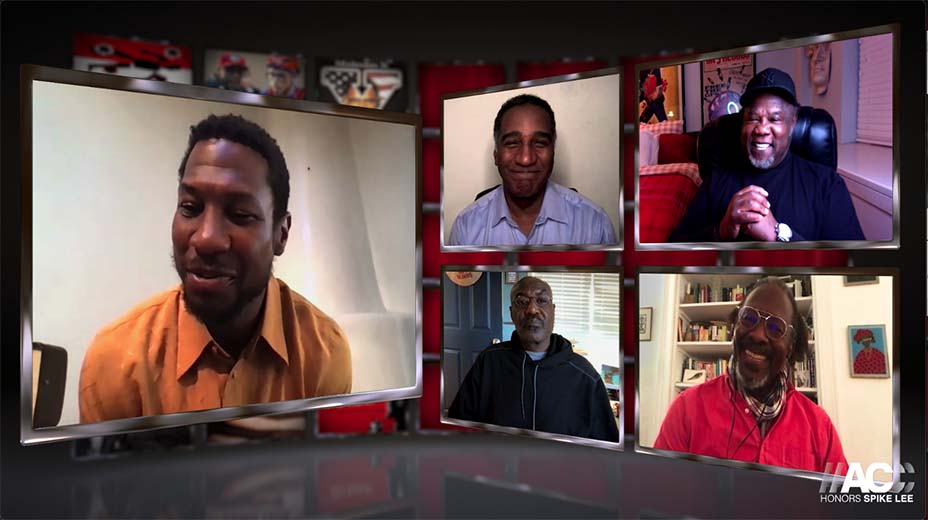 Also appearing was Black Panther director Ryan Coogler who joined Foster and Lee for a quick cameo. Both Coogler and Lee worked with the late Chadwick Boseman and it was Lee who said that he had to address that. “You know, I haven’t spoken about Chad publicly beyond writing some words,” Coogler said. “I loved him. I miss him. His talent was so potent that even though he was with us for a limited amount of time, he gave us so, so much. He gave us an infinite amount of gifts.”

Coogler asked Lee why education has been so important to him throughout his career. The Morehouse and NYU alum, who currently teaches film school, said he comes from a long line of teachers (his mother and grandmother) and it continues to enhance his life. “I have always felt that if you’re a teacher or professor and you’re not learning from your students, then you’re teaching.”

Rosie Perez, who starred in Do the Right Thing, focused her comments on how Lee has blended social commentary with a real commitment to philanthropy. “Spike Lee’s storytelling goes beyond the page or the screen to his community, his culture and the people he shares this world with, people affected by natural disasters, people in need of better education, of medical care, the older generation’s quality of life and the younger generation’s need to get a leg up in life. It’s no secret that when Spike Lee has something to say, he speaks out very loudly, trust me, but the difference is, he is usually speaking for others, not himself.” 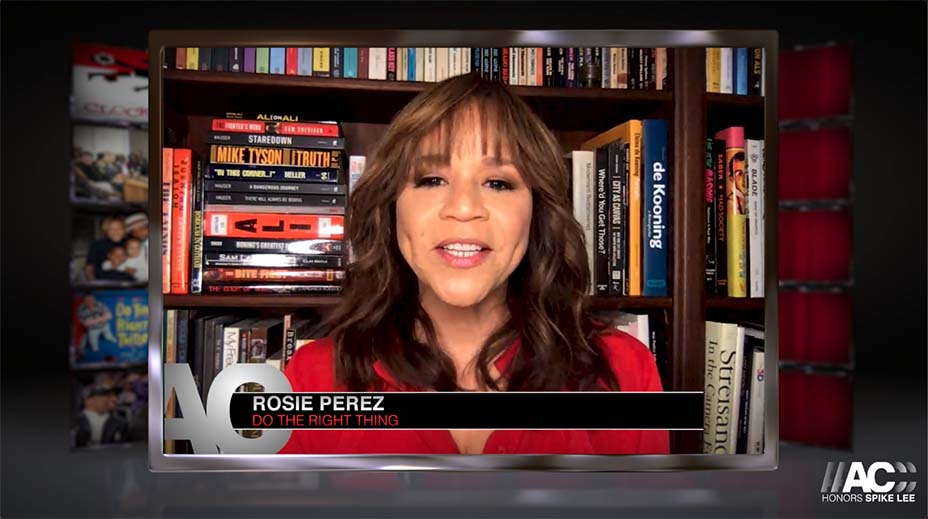