Bubbles, streamers, confetti or beach balls? Duh, all four, obviously. That’s what comes cascading down on the audience during the ebullient finale of SpongeBob SquarePants, a splashy $20 million bid by Nickelodeon to add a new monster tentacle to its lucrative animated media franchise — giving the yellow porous one his very own Broadway musical.

While the cartoon is beloved of children, stoners and children who grew up to be stoners during its two decades on air, I confess I had never been drawn to linger long in Bikini Bottom, the character’s underwater home. And for much of the show I was dazed by the sensory overload of Tina Landau’s acid-trip production while groaning at its fusillade of cornball aquatic puns and absence of musical cohesion. But whether it wore me down like coral erosion or grew on me like algae, the show’s unstinting commitment to anarchic plotting, goopy sentiment and bonkers ADHD juvenilia had me grinning like an idiot, even before I got knocked in the head with an inflated plastic orb (lawsuit pending) during the crowd-pleasing closing number.

Besides, where else do you see celebrity audience members like Ben Platt and Lucas Hedges posing for selfies with a giant female puffer fish while a trio of skate fish, outfitted as punk skater dudes, natch, rock out to a raucous Aerosmith tune called “Bikini Bottom Boogie?” Respect.

Since debuting on Nickelodeon in 1999, the series has generated more than $13 billion in merchandising revenue, while frequently becoming a magnet for political controversy. In 2004, a right-wing Christian group labeled it pro-gay propaganda, claiming it coerced children to embrace homosexuality. (SpongeBob and his starfish buddy Patrick do often hold hands while watching TV, and their octopus neighbor Squidward Q. Tentacles enjoys bubble baths. ‘Nuff said.) The following year a Republican senator lashed out at SpongeBob and other cartoons for promoting junk food and fueling the childhood obesity epidemic. (SpongeBob is a fry cook at the Krusty Krab. Tut-tut.) In 2011, climate-change denialists slammed an episode for pushing a global-warming agenda. (Take that, Scott Pruitt!) And in 2013, conservative outlets praised the show for its positive contribution to the national debate about job creation, while liberals called out the hypocrisy of the right for co-opting a convenient new hero in their war against the poor. (Boo!)

That said, this is a show devoid of politics, unless you count a quick reference to tidal warming. Its message of friendship, community and land-mammal inclusivity is pretty much that of every second other Broadway musical these days. It stands to reignite the old debate about the infantilization and theme-parkification of Broadway, with a patchwork score by a multitude of popular music artists that will rankle purists. 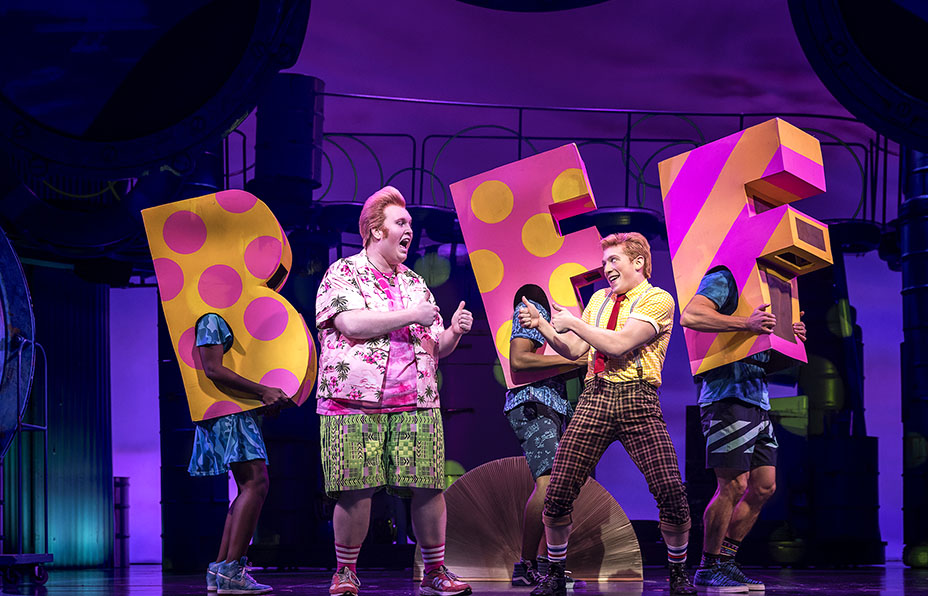 There’s a certain whiplash effect, to be sure, in jumping from Bowie/Eno gloom rock to bubblegum pop to country to gospel to more conventional show tunes. But there’s also a generosity of spirit here that, together with the playful visual imagination and the extremely likeable, racially diverse cast, proves hard to resist. The big challenge for Nickelodeon will be to lure the cartoon’s traditional fan base, the majority of whom may not be frequent theatergoers. Still, tourists wanting BIG production values will get their money’s worth.

The show is an eyeful even before it begins. Designer David Zinn, who did both the sets and the astonishing array of costumes, seems to have bought up the entire Western world’s fringed-Mylar supplies to drape the theater, with pool noodles, floaties and assorted junk twisted into undersea sculptures and huge neon fidget spinners glowing like pop-art flowers. While projection designer Peter Nigrini beams an aquarium screen-saver around the walls, core members of the band — dressed in Hawaiian shirts, as if they’ve arrived early for the Jimmy Buffett musical in the spring — play gently rockin‘ luau tunes.

When the fabulously costumed Bikini Bottom feeders flood the stage, shuffle down the aisles and descend from above on a trapeze in Jonathan Coulton’s buoyant opening song, “Bikini Bottom Day,” it’s like The Lion King on shrooms. (I have to admit, though, that the giant clown fish freaked me out; it made Pennywise look like a guppy.) Later on, the pink plastic umbrella jellyfish are to die for. The stage is almost constantly flooded with riotous color, electrified by Kevin Adams’ vibrant lighting.

Zinn has generally resisted the urge to go too literal with the costuming. So rather than stuff Ethan Slater in a box as the squishy title character, he puts the fit young actor in a yellow shirt, plaid clamdiggers, suspenders and a red tie, leaving him to evoke SpongeBob with his helium voice, irrepressible optimism and bouncy walk. Likewise snack-happy Patrick (Danny Skinner), wearing mismatched tropical-print shorts and shirt over a tie-dye T, with a pointy shock of pink hair; or Sandy (Lilli Cooper), the transplanted Texan squirrel science whiz, outfitted in a white athleisure jumpsuit with a flower in the voluminous ‘fro that takes the place of her deep-sea helmet.

Judging by the waves of laughter from kids in the audience the minute the actors open their mouths, character recognition is not a problem — though whether the same will apply to folks unfamiliar with the source material is another matter. 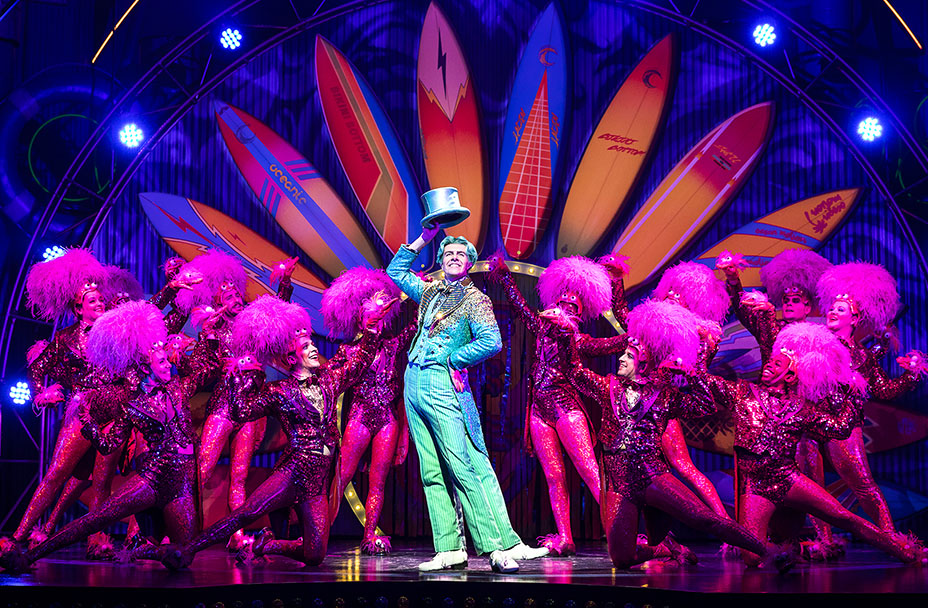 Perhaps the most ingenious costume is that of blue-haired Squidward (Gavin Lee), whose four-legged pants move with a hilarious rubberized jauntiness, not least in his showstopping number “I’m Not a Loser,” the highlight of the musical, penned by They Might Be Giants and brilliantly choreographed by Christopher Gattelli. Lee tapdanced upside-down across the proscenium in Mary Poppins; here he taps with an extra set of limbs in a giddy extravaganza backed by a fan-dancing chorus of gender-ambiguous sea anemones. It’s sheer bliss.

The plot is basically that of a typical TV episode, albeit padded to 140 minutes, which seems excessive for what’s first and foremost a kids’ show. Having recruited so many name composers, perhaps Landau and book writer Kyle Jarrow — who brings a disarming wackiness not unlike that of his cult hit, A Very Merry Unauthorized Children’s Scientology Pageant — couldn’t bring themselves to jettison even a single song. Sorry, Sara Bareilles, but the extraneous post-intermission warmup, “Poor Pirates,” catchy as it is, seems a prime candidate to be cut.

When Bikini Bottom is rocked by news of the impending eruption of Mount Humongous, endangering the community’s survival, SpongeBob, Patrick and Sandy set out to tame the volcanic threat using science. Meanwhile, SpongeBob’s money-hungry boss, Eugene Krabs (Brian Ray Cooper), looks to capitalize on the chaos by selling last-minute Krabby Patty specials, ignoring the wishes of his whale daughter Pearl (Jai’Len Christine Josey). The shellfish Mayor (Gaelen Gilliland), like most politicians, focuses on self-preservation. And dastardly Sheldon Plankton (Wesley Taylor), whose evilness is in direct inverse proportion to his size, cooks up a plot for fast-food domination with his trusty computer Karen (Stephanie Hsu), planning to hypnotize the entire population of Bikini Bottom and get them addicted to his vile-tasting chum burgers. West Side Story it ain’t.

No matter, there are enough cleverly staged and musically engaging moments to keep it entertaining. Notable entries include the title character’s de rigueur “I want” song, “(Just a) Simple Sponge,” by Panic! At the Disco, in which he yearns for a purpose, surrounded by glow-in-the-dark sponges; the central trio’s poppy anthem, “Hero Is My Middle Name,” by Cyndi Lauper and Rob Hyman; Yolanda Adams’ ecstatic “Super Sea Star Savior,” in which a worshipful cult of sardines, shaking star-shaped tambourines, seizes on dim Patrick as the solution; and the toe-tapping, inspirational Flaming Lips number “Tomorrow Is,” which closes the first act.

“BFF,” by the Plain White T’s, and “(I Guess I) Miss You,” by John Legend, both are cute, but also basically mirror versions of the same song, one celebrating the friendship between SpongeBob and Patrick, the other healing a rift. The most awkward fit is probably Sheldon’s rap, “When the Going Gets Tough,” by T.I., though the backup dancers’ green-sequined Hammer-time pants are keepers; while Lady Antebellum’s “Chop to the Top” is a disposable filler track that underlines the lack of real suspense in the plot. Thankfully, “Best Day Ever,” by Andy Paley and Tom Kenny, is a late-second-act winner, neatly summing up SpongeBob’s personal credo and encapsulating the upbeat themes of the show. 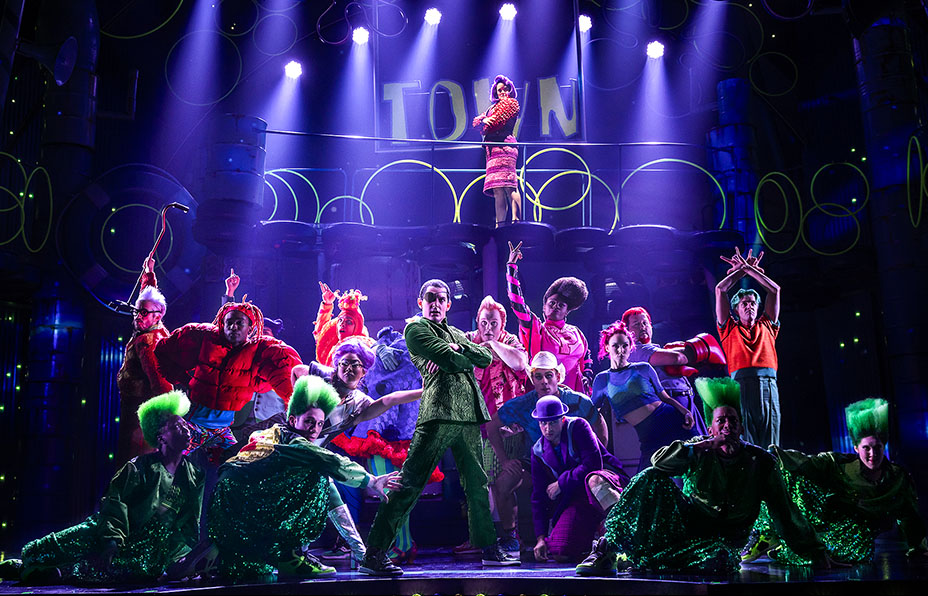 This is not the kind of musical in which performances have much room to pop, but Slater brings effervescence and lively physicality; Cooper and Skinner are equally appealing in different ways; Lee is both a droll comedic presence and a dynamic hoofer; and Taylor, occasionally channeling Richard O’Brien’s seething Riff Raff in The Rocky Horror Picture Show, makes a suitably slippery villain.

While there’s a sprinkling of references to classics like Gypsy and Fiddler on the Roof, musical-theater snobs should probably give SpongeBob a wide berth. But audiences willing to go with its demented escapism should find plenty of fun. Having a live foley artist (Mike Dobson) produce cartoon sound effects is an inspired touch. And it’s worth the admission price just for the joy of hearing tykes and adults alike squealing with delight as designer Zinn’s marvelous Rube Goldberg-type contraptions, made of bicycles, shopping carts and other discarded paraphernalia found on the ocean floor, shoot molten rocks from Mount Humongous onto the stage. Sure, the show is uneven, but it’s the genuinely explosive moments like these that are its take-home.

Presented by Nickelodeon, The Araca Group, Sony Music Masterworks, Kelp on the Road