Examples of the former include her international breakout, 1990’s Europa, Europa, in which a young Jewish man from Poland conceals his identity and joins the Hitler Youth to survive the war. Her more commercial outings include the feature adaptation of British writer Frances Hodgson Burnett’s The Secret Garden in 1996 and versatile television work on two HBO shows from David Simon: the landmark cop drama The Wire and Treme, about the aftermath of Hurricane Katrina in New Orleans. More recently she has stepped behind the camera on Netflix’s political drama House of Cards.

THR caught up with Holland in Paris in January, shortly before she left for Los Angeles, where she’s developing an English-language thriller. The 68-year-old helmer, who was born in Warsaw but calls L.A. home, discussed the origins of Spoor, the parallels she sees between Donald Trump and the rise of populism in Poland, and why her home country is at a crossroads.

You describe your Berlin competition entry Spoor as “an anarchistic-feminist crime story with elements of black comedy.” Its Polish title, Pokot, is just as unusual. What drew you to this story?

Pokot in Polish is a hunting expression, meaning the count of killed animals. The expression is not widely known in Poland. The English-language title is a hunting term that refers to the trace, or tracks that animals leave, and has a similar enigmatic feeling. The film is set in a remote mountainous region, and the plot is about the mysterious death of several hunters and is based on a novel by Olga Tokarczuk. I was attracted by the message and because it is an adventurous genre, which I did not do before. For me it is a kind of experiment as a director. 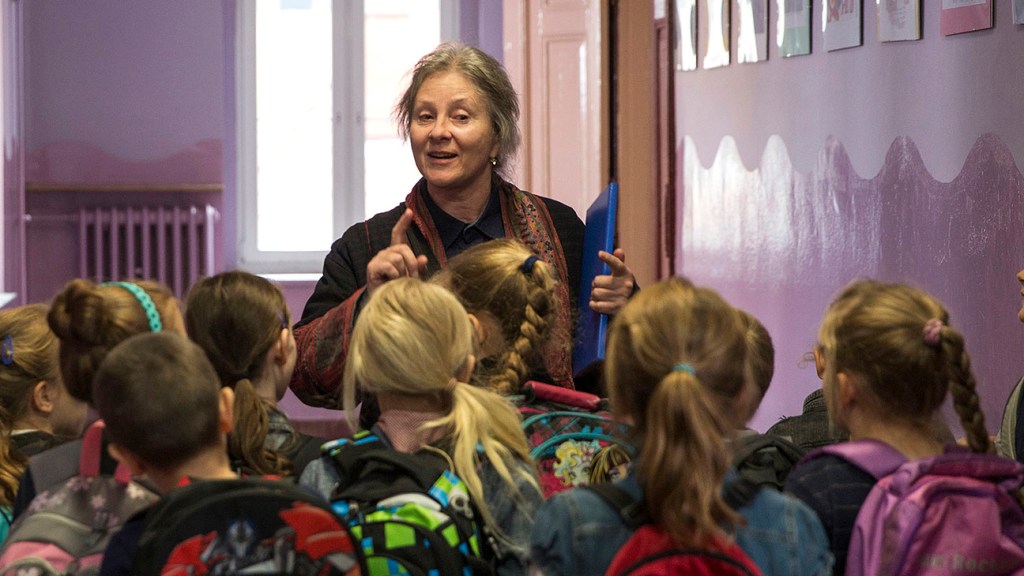 Spoor is not openly political, but what is sad — or funny — is that in the context of the current political climate in Poland, strangely, it speaks about very political issues. The current government is deeply anti-democratic — democracy for them means total dictatorship of the majority, quite misogynistic and anti-ecology. The hunting lobby in this government is an example. They are passing laws not only against animals, but against those who oppose hunting, too. The Polish foreign minister has spoken out against “cyclists, vegetarians” and ecologists. It is some kind of counter-cultural revolution.

Do you see parallels between the election of a right-wing populist government in Poland and the U.S. presidential election that put Donald Trump in the White House?

There are some similarities — how they address the new fears of a big part of the population through some kind of populist lie. We see it not only in Poland and with Trump, but with Brexit, in Hungary, in what is going on in Russia and Turkey, and what can happen in the coming political season in Western Europe in countries like France, Italy or Holland. We are living through a very powerful political counter-revolution that questions the very basic principles of democracy. That is a big challenge to the very existence of the European Union. In my opinion, it is terribly dangerous and can lead to global conflicts that we cannot even imagine today.

I think there are some factors that are responsible that come with progress: One is the new media and its manipulation of facts, when the truth doesn’t matter and lies are more attractive, which is very much responsible for both Brexit and Donald Trump’s victory. Another is the effect of globalization. Some [issues] come with the refugee problem, which is huge and which no one seems to know how to solve. I see as really important also the problems linked with the emancipation of women, which creates a totally new demographic and changes traditional white societies in a way that becomes difficult to accept for a huge part of white men. That was Trump’s electorate, but also Brexit’s. Certainly, that is a very important factor in the politics of the Polish government, which is very much against women’s rights.

Do these political challenges have any impact on Europe’s film industry?

The European film industry is in a very long and slow-burning crisis. The strength of European cinema is its variety, not only cultural and linguistic, but in the innovations of cinema language. It is not in the best shape, but it is alive.

In terms of gender, that is a problem in the States as well as Europe; for women it is much more difficult to have the financing to make long feature films. It is a bit better with documentaries, and for television it varies — we can see some development. The position of women directors in television is unstable.

Are these challenges prompting the development of a new kind of European cinema?

What is bad for the population, for Europe, for the political situation, is mostly good for cinema because cinema always flourishes when tensions in society grow and people are feeling the urge to confront the depth of challenges. It may influence subjects, themes and the language of European and maybe American cinema as well.

What drew you to doing TV series, such as the episodes of The Wire, Treme and House of Cards you have directed?

I was following the development of American television, especially cable, which has, in many areas, taken the place of independent and more innovative American cinema. TV became exciting — trying different approaches, narratives and storytelling — and is not linked so much to the star system.

I wanted to see if I could fit into this new — renovated — medium. It is not my main activity, but developing or directing series is quite exciting. It is certainly a good exercise for a filmmaker today, though it is more a medium of writers than directors. For the director to do a pilot, it is exciting because in some ways you can create new worlds; you decide the style of the story and many of the elements that afterward are followed by your colleagues.

We touched upon Brexit. How is that seen by Polish people, who make up the biggest single group of EU immigrants to the U.K., more than one million?

You don’t have something like “Polish people” anymore, you have half of Polish people that have one opinion different from the other half. The division is really deep. You don’t have one reaction. Of course the part of Polish people I belong to have been very depressed and angry about it as we see it as a possible danger to the entire European structure, which is very important to Poland, giving some sense of deeper security to Polish democracy and independence. And there is the large group of Poles living and working in the U.K., and they feel insecure about it. The Poles were the first victims: The first reaction after Brexit was nationalistic and xenophobic in the U.K. and that was turned against Poles. One Pole was killed and several others were attacked. Another [part of the Polish community in the U.K.], the right-wing part linked to the current government, experienced some kind of schadenfreude, satisfaction that the European Union is weakened by this decision. To me, it’s like turkeys anticipating Thanksgiving with joy.