Continue to The Hollywood Reporter SKIP AD
You will be redirected back to your article in seconds
Skip to main content
April 7, 2018 8:00am

Taking place just one week later on the same Empire Polo Fields in Indio, California, the Stagecoach country music festival has always had a reputation for being Coachella’s less-cool cousin. Where Coachella has Lorde and flower crowns, Stagecoach has Luke Bryan and rebel-flag bikinis.

What They'll Be Wearing at Coachella 2018

“It’s fun because it’s redneck-y,” says Los Angeles-based hairstylist Leland Ferrell, who rents an RV with friends every year to camp at the fest. “The big difference is people are drunk instead of on Molly.”

The three-day festival, set to run April 27-29 and featuring such crossover acts as Keith Urban and Florida Georgia Line, has been a magnet for country fans since its launch in 2007 and has slowly but surely made a name for itself as the genre’s largest gathering in terms of attendance as well as profits. However, unlike its boho fashion-fueled counterpart, which this year boasts activations hosted by Levi’s, Moschino, Mercedes-Benz and American Express, Stagecoach has failed to cultivate the same cachet. But that may be changing.

“The audience is getting younger,” Stagecoach’s talent buyer Stacy Vee tells The Hollywood Reporter, adding that many of the attendees that flock to Southern California actually live in stylish coastal cities. “It leans heavily female — a lot of young, professional women coming together for a fun weekend,” she says, noting artists like Kacy Musgraves, Kelsea Ballerini and Brett Young (whose draw is equal parts talent and handsomeness) are some of what’s attracting young women to Indio.

According to a 2011 study, country music fans overall tend to be older (45) than the millennial sweet spot advertisers so desperately seek to reach. But according to a 2017 Country Music Association report, the number of millennials listening to the genre is on the rise, up 54 percent since 2005.

The simultaneous ascent of genre-bending stars like Sam Hunt, who was called a “suave-bro country superstar” by The Ringer and performed with Snoop Dogg at Stagecoach in 2016, as well as Florida Georgia Line, which memorably collaborated with Nelly on the popular crossover hit, “Cruise,” may have something to with the changing demographics. The hip-hop infusion has helped to grow the audience of the genre, and also given it a cool credibility.

One brand taking advantage of the transition is skincare line H2O+Beauty, which is hosting its first-ever “Beauty Oasis” timed to the festival. It’s not quite the rager that Coachella partygoers may be used to; instead, the brand is hosting a relaxing spa retreat at the Zenyara house in Indio with guest performances and, we’re guessing, plenty of influencers to Instagram the experience (with the appropriate hashtags, of course). Chevrolet is also hosting a Stagecoach-adjacent event. 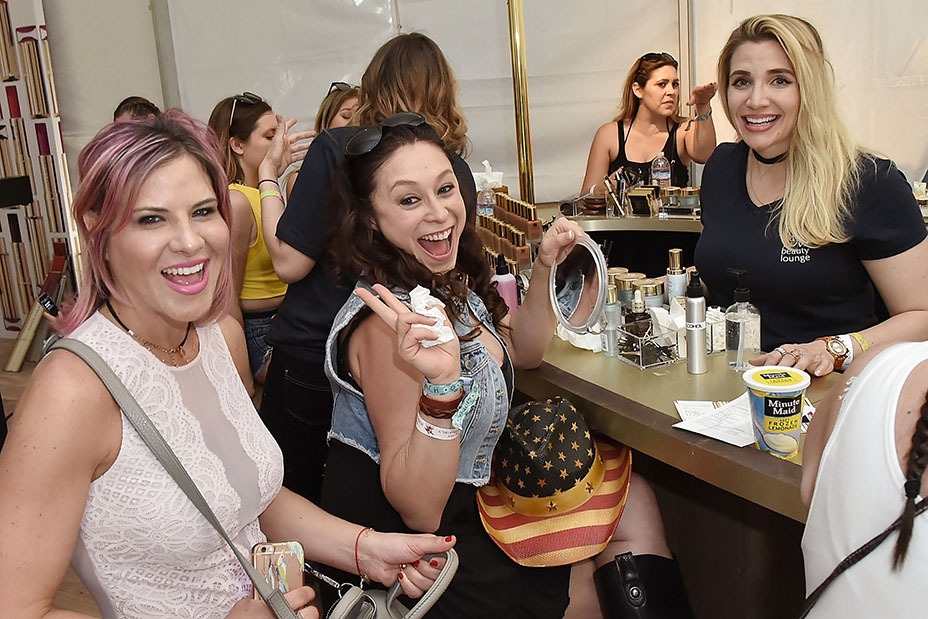 For the second year in a row, fest sponsor Estee Lauder will host an activation on the grounds, offering attendees touch-ups from their selection of high-end skincare and makeup. Also popping up on the Empire Polo Grounds is Nikki Lane’s Stage Stop Market, which will feature — as an alternative to cliched cutoffs and tube tops — vintage wares from eight vendors hand-picked by singer-songwriter Nikki Lane, herself a two-time Stagecoach performer. The market will include a small stage as well as “Nikki’s Hangover Bar” and is being branded as a reprieve from the wilder side of the fest.

After the success of a smaller scale vintage market hosted in the RV camping area last year, Vee said they decided to come inside the festival as part of Stagecoach’s larger initiative to offer more activities for attendees. One of the vendors at the market is Lane’s own Nashville-based vintage store, High Class Hillbilly, which she launched in tandem with her music career in 2011, thrifting at the local shops in the small towns she hit during her tours.

Lane tells THR that shoppers can expect to find reasonably priced tees, hats and ‘50s-era bandanas, as well as glitzier items (a beaded vest or a rare concert tee). “A lot of people are playing into the throwback look — but the reason people celebrated early festival style was because [festivals] are a chance for the freaks to roll out,” she says.

While Lane’s hand-selected vintage vendors are churning out the classic country Americana, one addition to the marketplace has a decidedly more free-spirited vibe. With its kimono robes and high-waist velvet briefs, Solstice Intimates of Tempe, Arizona, could just as easily have landed at Coachella as at Stagecoach. Pieces are handmade, however there are definite sultry ‘70s vibes via leopard and desert-inspired botanical prints, fringe detail and high-cut body suits.

Celebrities also play a role in attracting more fashion and beauty sponsors. Though Coachella still takes the cake for star sightings, Stagecoach is gaining. And as we know, where celebrities go, brands will follow. Ashton Kutcher and Mila Kunis have danced the night away at the honkytonk Polo Fields in the past, and A-listers including Reese Witherspoon, One Direction alum Niall Horan, Nick Jonas (who memorably joined Shania Twain onstage for a duet last year) and Cindy Crawford have also trickled in. This year, fans are betting that Urban’s wife Nicole Kidman will make an appearance.