Sean Spicer’s shock appearance at Sunday’s Emmy Awards continues to divide Hollywood as a number of stars took to social media to slam his cameo and the supposed attempt to rehabilitate his reputation and “normalize” the Trump administration.

Spicer’s appearance was one of the must-see highlights of a largely uncontroversial and gaffe-free evening, but in the aftermath of the show, it has quickly become a hot topic on social media.

British actor Jason Isaacs, in particular, didn’t hold back in an Instagram post in which he excoriated Spicer’s political past and his personal appearance. Describing the pol as a “modern day Goebbels,” Isaacs knocked Spicer as short and “deeply unattractive, from inside and out,” with the “aura of a giant festering abscess.” 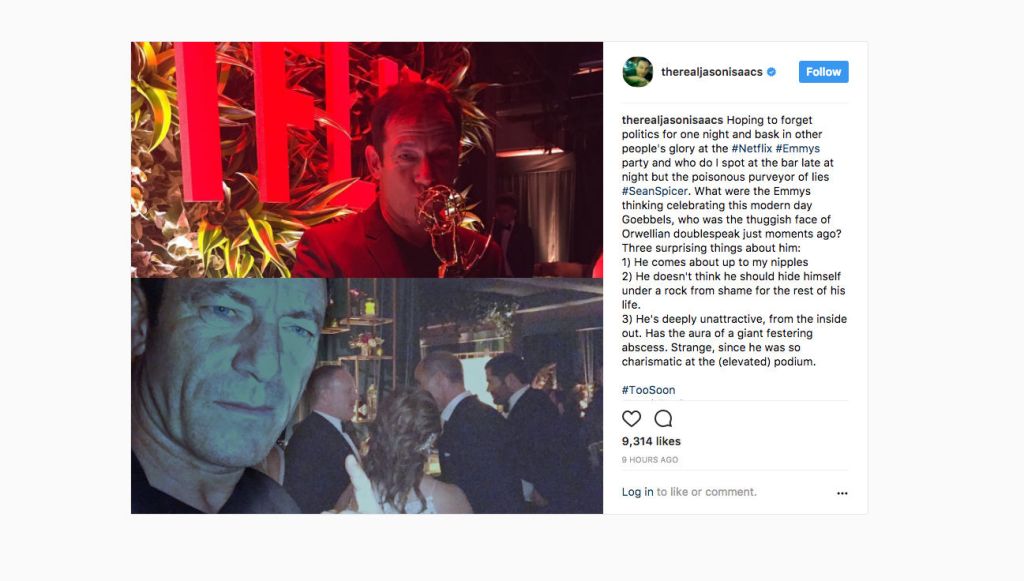 Other politically active stars, such as Zach Braff, Alyssa Milano and Seth Rogen, have also criticized the move to have Spicer on the show.

Happy for all the winners tonight but sad that we continue to normalize this Presidency by inviting Spicer to participate. #emmys

Truly so grossed out by A GROUP of people ever even considering the idea of real life Spicer at the Emmys. What is wrong with you? Wake up.

Wish I was at the Emmys so I could have jerked off @seanspicer too!

I’m not ready to laugh “with” Sean Spicer. I think he is an evil, opportunistic liar that hurt our country.

This is how @JKCorden normalizes Sean Spicer. This isn’t cute or having a laugh. There isn’t any middle ground here. Corden chose. #Emmys https://t.co/Mcr4pyIiGP

Ironically, one of the Trump administration’s biggest critics, Emmys host Stephen Colbert, was behind the Spicer cameo idea. Spicer told THR‘s Chris Gardner that the idea came together after he “had a conversation with Stephen [Colbert] and his executive producer.” Spicer continued, “They came up with a concept, and I thought it was kinda funny. I said I’d be there.”

What pariah? Sean Spicer getting mobbed in #Emmys lobby. Posing for pics, drinking beer, soaking up all attention after onstage appearance pic.twitter.com/WqJpaRtAvK

Gardner described the scene backstage as stars and industry people lined up to take selfies and speak with the controversial former press secretary:

“There were hugs and handshakes in the Microsoft Theatre lobby where Spicer was spotted by The Hollywood Reporter just before 7 p.m., clutching a large beer and posing for pictures with anyone who asked — and anyone who could bust their way through the mob of well-wishers forming around him. One woman, a publicist, bragged that she was happy to share a few seconds with him. ‘He felt like a celebrity,’ she said. ‘And he was enjoying it.’ “