When John Boyega was a teenager, he used to take a bus from his South London home into the West End, visiting theaters — but not to see plays. “I really wanted to be onstage and I didn’t know how. I remember going to the Lyceum Theatre at the time The Lion King was playing. I didn’t even know how the box office worked, I’d just see people sitting there and I’d ask them how to audition for the show.”

“I’d also spend time in front of the National Theatre, because in the summer they would do performances outside,” Boyega continues. “And on the way I would pass the Old Vic. That wasn’t a theater where I ever imagined I could be.” He laughs. “It was the Old Vic and down the road there was a Young Vic. I was a kid. I was struggling to understand.”

To a 14-year-old, theater might have seemed like a galaxy far, far away. But fast-forward little more than a decade, and not only is Boyega about to step onto the Old Vic stage, he’s playing the title role in its eagerly anticipated production of Georg Buchner’s Woyzeck. Asked if that fact has sunk in, he smiles and simply says, “Nah.”

Now 25, Boyega is returning to the stage for the first time since his film career took flight — first with the culty sci-fi comedy thriller Attack the Block in 2011, and more globally as Finn, the reluctant stormtrooper turned Galactic rebel in Star Wars: Episode VII — The Force Awakens. The decision to head back to the theater, he says, was made the moment Finn hit the screen.

“When we were doing the publicity for Episode VII, in 2015, the question for me and Daisy [Ridley] all over the world was ‘What’s next?'” Boyega recalls. “The suggestion was that we were never going to get cast in anything else. I remember going to a professional get-together and people saying ‘Star Wars is great, but don’t you worry about being stuck?’ My response was OK, cool. Number one, that’s not going to happen. Number two, it’s a great chance for me to go and do some theater. I’d rather not forget my craft.”

There was another reason, he admits with commendable understatement: “The Star Wars stuff can get a tad bit intense. It’s good to have a detachment from that.”

Boyega had been offered plays after Attack the Block, which he’d dismissed as typecasting variations on that film’s surly, inner-city gang leader. In contrast, Buchner’s 19th-century drama about a soldier driven mad by poverty, humiliation and jealousy, “is a good chance for people to see me live and as someone different. I’ve never had to deal with mental illness onscreen or stage. That was an attraction. And [adapter] Jack Thorne. Reading his script was such an experience for me. I was in utter shock, and a bit scared.”

Scared of the task ahead? “Yeah. But that makes me confident. It’s how I work. If I’m pushed into a corner, you’d better throw up your fists.”

It seems appropriate, then, that when he sits down after a day’s rehearsal, the actor is holding an energy drink and sporting a bruised face. “I bust my lip today. I was doing the final scene, the murder, and just went a bit mad. Woyzeck’s supposed to hurt himself, with a big head butt to the ground, which is fake of course … but then it wasn’t.”

“I understand when actors say they can detach from a part,” he adds. “But to be honest, man, this has made me remember all about theater. It requires you to give your all, even in rehearsal. You invest.” 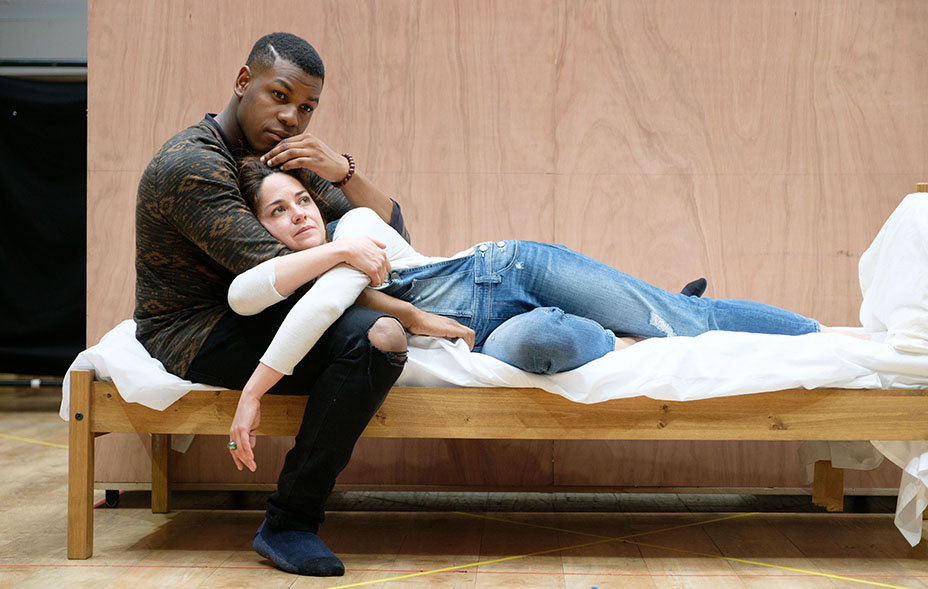 Woyzeck was famously unfinished when Buchner died in 1837, its conclusion clear but leaving room for interpretation. Playwright Thorne, the talk of the town for his awards-laden hit Harry Potter and the Cursed Child, sets the play in 1980s Berlin, adding a Cold War chill to the already bleak template and, apparently, substantially more material.

Boyega says the aim is to make their protagonist more relatable. “We emphasize everything about Woyzeck’s circumstances — his financial instability, his love life, his post-traumatic stress, his messed up relationship with his mother. He also sees a young version of himself, at 9 years old. He questions his existence and why he matters to the people that he loves.”

“We’ve all gone through some of these things,” Boyega confesses. “You worry about money, your partner, your family. But it’s not this dark. So we try to give perspective. And perspective can create empathy, which is uncomfortable, because what he does is absolutely wrong.”

Directed by Joe Murphy, the production has allowed its star to connect to his roots, rather sweetly, by arranging for a youngster from the children’s theater group he himself attended to play the younger Woyzeck. Boyega is now a patron both of that group and of the multicultural Identity School of Acting, where he subsequently trained and whose founder Femi Oguns is now his manager.

There was some theater work, including a youth production at the National and small roles at the Tricycle, before Attack the Block changed the goalposts overnight, giving him the opportunity to successfully court Hollywood.

John Boyega Used to Get Stopped When Flying to L.A. "Every. Single. Time."

Just six years on, he has three movie releases this year — The Circle, with Tom Hanks and Emma Watson; Kathryn Bigelow’s Detroit (“She’s phenomenal. If she ever calls again, I’ll be available”) and Star Wars: Episode VIII — The Last Jedi. Episode IX starts shooting in January, and he’s in post with Pacific Rim: Uprising, the first film made by his own production company.

Heady stuff. Yet given Boyega’s evident passion for theater, it’s telling that he didn’t give the stage more time at the outset of his career, though the reason is a familiar one.

“I went away because I love movies too,” he acknowledges. “And at the same time, the U.K. for actors, especially for black actors, wasn’t great. There was a moment when we were all inspired by Idris Elba, when we discovered that he was in The Wire and he was British — we all thought he was American. And that created something in me, a desire to go to America, to be a part of that experience.”

He agrees that the diversity issue hasn’t gone away, but seems intent on quiet change: “If you’re put in a certain position, you can be a great example for someone, can inspire them. I look at it from that perspective.”

Boyega also believes that his casting as Woyzeck goes hand in hand with the Old Vic’s ambition to widen its audience: “And that for me is an exciting thing to be a part of.”

Woyzeck opens May 23 at the Old Vic and runs through June 24. Previews begin May 15.