That is not out of the ordinary; Star Wars fans are nothing if not avid, ravenous collectors. But now it seems there is a new issue: the selling of items that were never meant to be removed.

As Brady MacDonald first pointed out in the Orange County Register, some previous guests to the park are being pretty blatant in their effort to make a buck — or in some cases hundreds of dollars.

One such example is a “rare” (not really) pilot assignment card for the ride Millennium Falcon: Smugglers Run, listed at $400.

These cards are handed out on the ride by castmembers (staff) when determining who will operate which part of the ship during the mission. They should be returned once the ride has concluded. 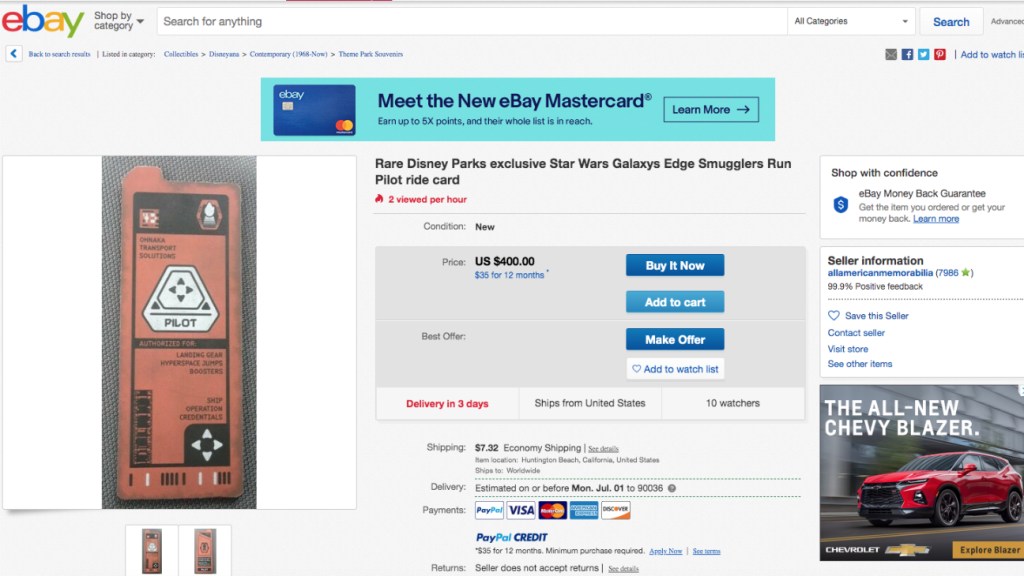 Another example is a listing for a Oga’s Cantina tiki mug, a laminated menu and assorted coasters, plus a map of the land. The mug does sell at the Cantina for $42, but the rest of the items are not meant to be removed, especially the menu. The whole “set” is being sold for $250.

The issue got so bad, it appears the park stopped carrying a few items, including Galaxy’s Edge maps and unique Docking Bay 7 (restaurant) sporks, MacDonald noted in the Register.

Disney did not immediately respond to a request for comment.

As for those reselling items they purchased in the land for an exorbitant amount — that started during the weeks-long soft opening.

The most popular items to resell appear to be the Star Wars land exclusive Legacy Lightsabers. Those are sold in Galaxy’s Edge for about $100 to $200 (depending on the character) but resell for hundreds on eBay.

Galaxy’s Edge opened to the full public Monday. The soft opening for the highly anticipated land began May 31 when a reservation was required.

As of Monday, guests to Disneyland could enter Galaxy’s Edge at their leisure as long as the 14-acre area was not at capacity, which did happen almost an hour into Monday. After that, guests were put in a digital queue to come back to the land at a later point in the day. However, by the late afternoon, Galaxy’s Edge was off the queue and people could once again come and go as they pleased.

The Star Wars land is expected to open at Walt Disney World Resort in Florida on Aug. 29.