On Oct. 7, with Tennessee voters a month away from electing a senator, Taylor Swift threw a much-needed lifeline to Democrat Phil Bredesen, who trails Republican Marsha Blackburn by eight points in the polls. “I cannot support Marsha Blackburn,” Swift wrote on Instagram, breaking her much-scrutinized silence on politics and endorsing Bredesen and another Democrat running for the House. On social media, she immediately received both cheers and jeers. “Let’s say I like Taylor’s music about 25 percent less now, OK?” President Trump told White House reporters a day later.

Will the star’s endorsement make a difference in the race? And after the president has effectively demonized Hollywood’s liberal wing, do voters even want A-listers to wade into the midterms? It depends.

A new Hollywood Reporter/Morning Consult poll of 2,192 adults across the U.S. sheds light on whether celebrity opinion holds sway with Americans. Some 58 percent of those surveyed say they’re not interested in the political and social opinions of celebrities they like, while only 9 percent are strongly interested in hearing from entertainers.

Respondents don’t think the views of celebrities impact them, with only 24 percent saying that performers are “very” or “somewhat” effective at swaying them politically. Only 11 percent of those surveyed say they’ve made a donation or volunteered for a cause because a star has encouraged them to do so. “Celebrities don’t have much influence,” says Alex Conant, a Republican political strategist who worked on Marco Rubio’s 2016 presidential campaign. “If anything, from a Republican perspective, being attacked by a liberal celebrity can be a badge of honor.”

Democrats (55 percent) are seen by respondents as far more likely than Republicans (31 percent) to be influenced by celebrity opinions. Donna Brazile, who served as chair of the Democratic National Committee in 2016 and 2017, says stars are still “great validators” and help inspire voter action. “Taylor Swift is not known for political activities, so her decision might have a ripple effect, especially with millennials,” she adds. Swift’s stance may already be having a tangible impact. Registrations tallied by the nonprofit organization Vote.org spiked by 65,000 in the 24-hour period after the pop star posted her political endorsement.

Half of those surveyed say they don’t even know the leanings of their preferred celebrities. But, while Americans don’t see celebrities as effective influencers, they do think entertainers have contributed to polarization: 53 percent say they have increased the differences between the two parties, and 45 percent say they have increased party loyalty. That’s likely because stars who enter the political arena may have strong political opinions, rather than advocating for centrist positions.

From the outside, Hollywood has been portrayed as a liberal-leaning town, and that’s how those surveyed see it as well: 61 percent view the entertainment industry as “very” or “somewhat liberal,” while only 3 percent see it as “very conservative.” For the midterm elections, Hollywood has given almost exclusively to Democrats and liberal-leaning organizations: According to a THR review of federal donations, 99.7 percent of the more than $4 million given by Hollywood’s top executives and talent has gone to Democrats during the current election cycle — donations made between the 2016 cycle and the 2018 midterms.

While those surveyed are not sanguine on stars getting political, they don’t generally take retributive action: Only 21 percent say they’ve unfollowed a celebrity on social media because of his or her positions, and 24 percent say they have not watched a TV show or movie for the same reason. While some on social media pledged to stop listening to a newly political Swift’s music, it’s thus unlikely that many will follow through.

But the respondents are less keen on stars supporting Trump (42 percent find appropriate) or opposing him (38 percent find appropriate). Only 13 percent say they’d be much more likely to support the president if one of their favorite celebrities endorsed him. Tyler Sinclair, vp research at polling firm Morning Consult, notes, “Our survey finds celebrities’ opinions can be most impactful when they take up universal issues that have bipartisan appeal.” 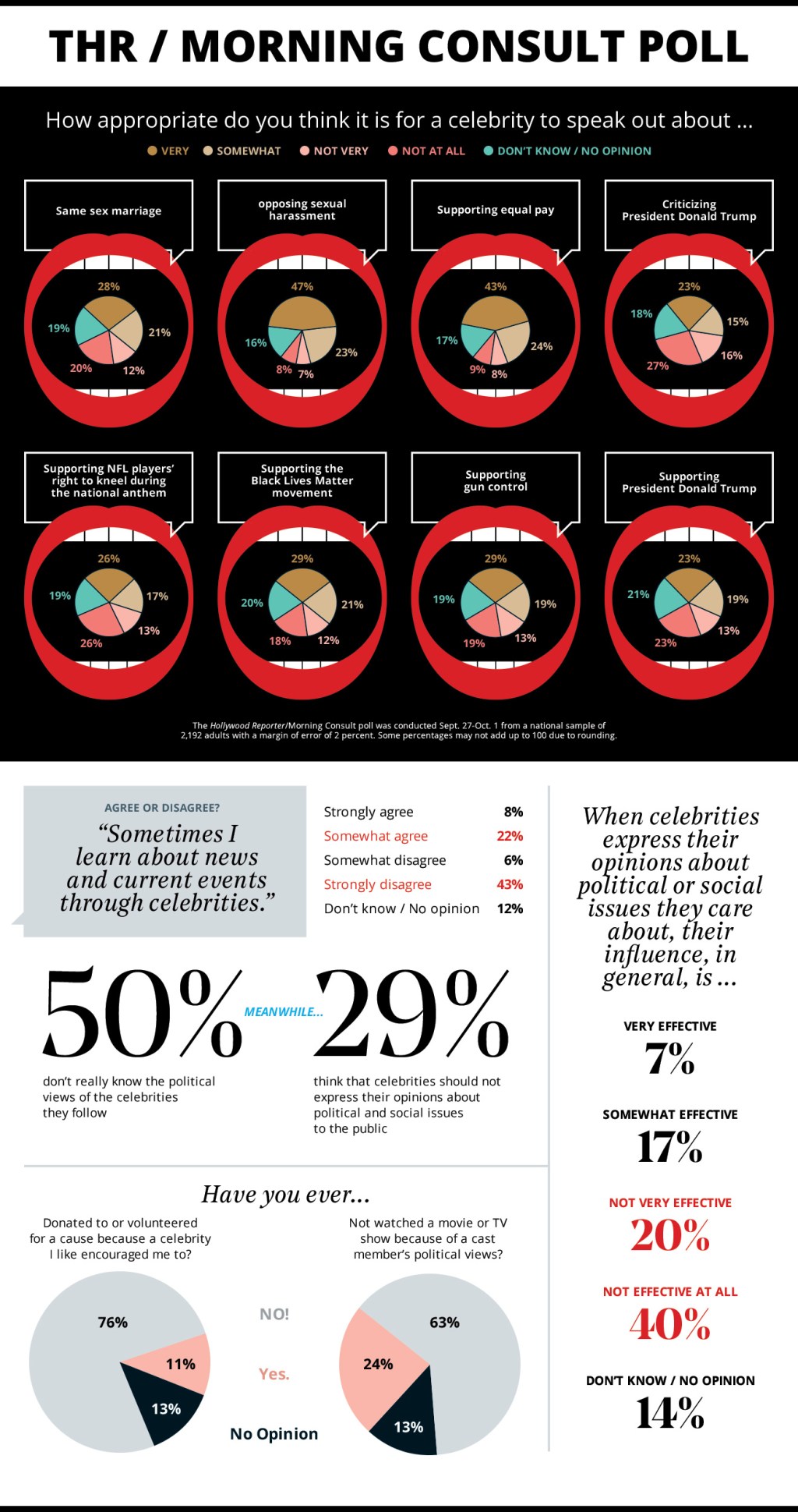 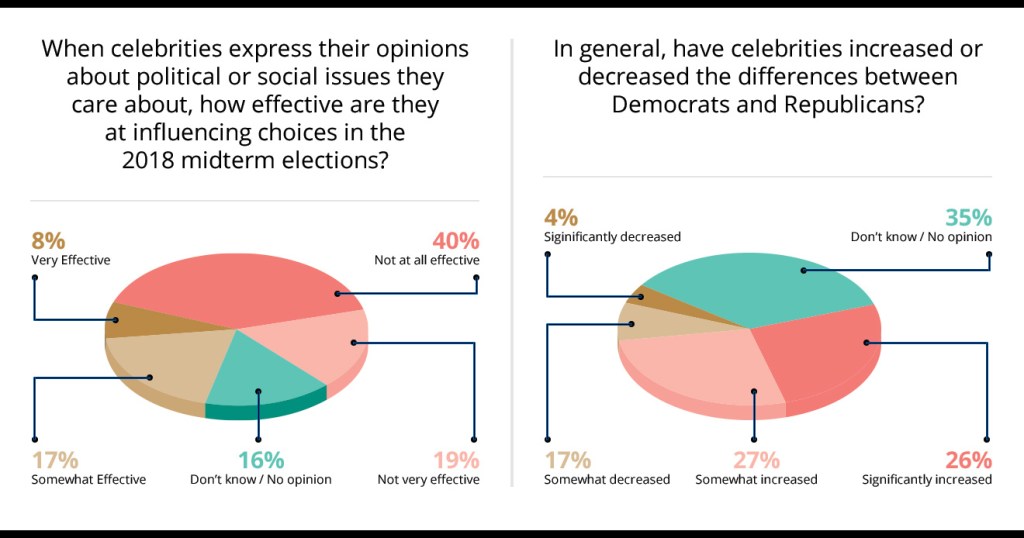 The Hollywood Reporter/Morning Consult poll was conducted from Sept. 27 – Oct. 1 from a national sample of 2,192 adults with a margin of error of 2 percent. Details.

This story first appears in the Oct. 10 issue of The Hollywood Reporter magazine. To receive the magazine, click here to subscribe.

How Hollywood's Political Donors Are Changing Strategies for the Trump Era