Paris’ sustainability queens put on a united front on Monday, with fashion design doyenne Vivienne Westwood front and center as Stella McCartney presented her most sustainable collection ever. Brit pals Ellie Goulding and Maisie Williams were also perched near dad Paul McCartney for the Spring-Summer 2020 show.

On each seat, McCartney laid out her plea for the planet. “The world is crying out for change and it’s our responsibility to act now,” she wrote in her show notes. She cited the Greta Thunbergs of the world, who are pushing for change as the world’s climate crisis accelerates.

It’s been the rallying cry for all of fashion month, with Dior and Swarovski announcing green initiatives this week. McCartney listed the timeline of steps she has followed, starting with her vegan ethos and ending up at this collection, her most sustainable ever, which includes recycled polyester and plastics. But just as she burnished her credentials as one of the leaders on these issues starting way back in 2001, she fessed up to the folly of having a show at all.

“Like all businesses, we are part of the problem, but we are pushing boundaries every day to find solutions that do exist in an industry desperately in need of change,” she wrote. Business is business at its core, and Stella still needs to sell.

Yet she reveled in the pride of having been a leader in this industry way before anyone had heard the words “circular economy” and closed-loop viscose was cool. Much of it was expressed in the soundtrack.

“They’ll never take my power,” from Tierra Whack and Beyonce’s “My Power” and “The leavers didn’t wanna believe us, now they catching the fever,” from Rony Rex and Carla Monroe’s “Milk It” blared through the halls of Paris’ opulent Opera Garnier. But it was the rallying cry from Valentino Khan’s “Better” that thumped like an anthem: “So fuck the other bitches, ’cause I’m the best bitch.”

It was a confident debut under LVMH, after McCartney exited competitor Kering last year, and the designer was feeling free. The move is all the more mysterious after Kering pledged to go carbon-neutral earlier this week, while LVMH has not signed on to any of the industry pacts so far. McCartney is now the group’s main environmental adviser. 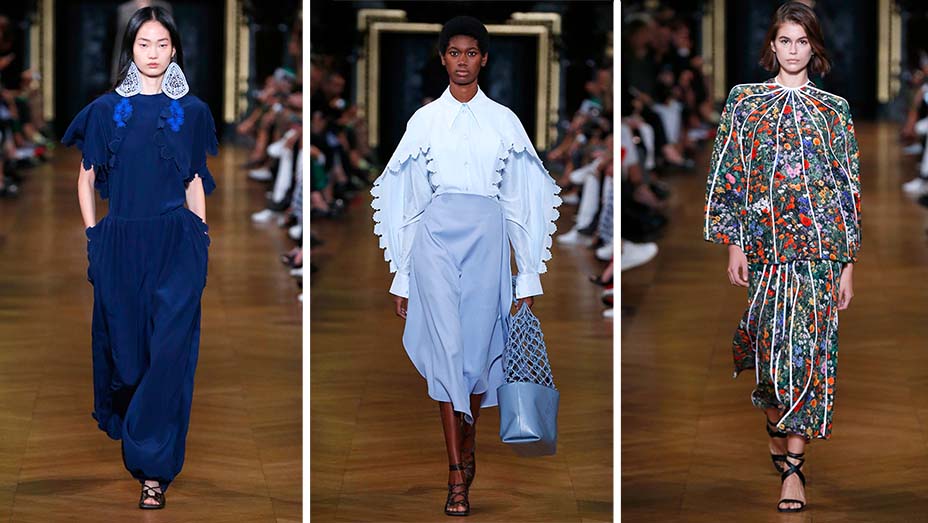 Whether it’s the exuberance of having a different billionaire backer or simply that she was determined to show that sustainability can be chic, McCartney got her message across in a light and airy collection. This, for all the KonMari devotees out there, felt like it sparked joy. Scalloped edges on skirts and sleeves, particularly on billowy blouses, power stripes for women, and floral trenches for men.

But low impact is still impact, and that’s the inherent contradiction of the being in business, even if she is more conscious than others. That she showed on the same day that fast fashion behemoth Forever21 declared bankruptcy is perhaps even more indicative of the state of the industry. Are we all tired of so much stuff?

“The future of fashion is not just a trend,” McCartney wrote. But fashion week rolls around again in just three months and it remains to be seen if sustainability sticks.

In a low-impact move and what was perhaps the chicest show exit ever, Kaia Gerber strapped on a shiny red helmet and sped off on the back of a motorbike.