Earlier this week, Stephen Colbert and his wife, Evelyn, hosted a party in celebration of the acclaimed, Oscar-shortlisted documentary Life, Animated. The film explores how Owen Suskind, the autistic son of Pulitzer-prize winning journalist Ron Suskind and his wife, Cornelia, learned how to express his emotions and communicate with others, including his parents, through Disney movies.

The Colberts first saw the film at the Montclair Film Festival, which they’ve long been involved with, with Stephen even hosting a post-screening Q&A with director Roger Ross Williams after the movie opened the 2016 edition of the New Jersey festival in April. And nearly eight months later, the Late Show host shared his profound appreciation for the film with a crowd of people at Megu restaurant in Manhattan.

“It’s really an extraordinary documentary,” he continued. “What do we not want to be, any of us? Alone. What do we want to be? We want to have a community. And this film is about how one man, Owen, managed to communicate with his family and his family reaches out to him and creates his own community through his love of art. There’s a great mirror in the movie of you loving the movie you’re seeing and seeing someone else being able to connect with other people through art. And I think in the next four years or the next 400 years, art is the way we’ll communicate with each other on ways that have nothing to do with the things that divide us.”

Colbert, who said he was “so grateful” to have seen the film and to the Suskinds and Williams for making the movie, adding that this is the second time he owes Suskind, revealing that the journalist’s work served as an inspiration for his Colbert Report character.

“People may not know this, but I actually owe my career to Ron Suskind,” Colbert said, “because I based my entire character in The Colbert Report off of one paragraph of an article he wrote in 2004. I’m not cutting him a check for it, but I will admit that he did that.”

The late-night host’s comments became a theme throughout the opening remarks, as Williams added that not only does he also owe his career to Suskind, he also owes his “whole family, connecting with my father again” to Suskind, explaining that he first met Suskind 15 years ago when he “forced” Williams to do a piece in which he found his biological father.

Later, special guest Gilbert Gottfried, joined by his Aladdin co-star Jonathan Freeman (the voice of Jafar), whom Suskind introduced after recalling how their characters helped him and Owen communicate, joked, “I don’t owe a goddamn thing to Ron Suskind, which is what separates me from everyone else here.” In all seriousness, though, both Gottfried and Freeman said they were moved by how their work helped Owen and ultimately led to a friendship with him. Gottfried added that after he learned of Owen’s story in The New York Times, he thought, “This shows that I can do wonderful things as long as I’m not directly involved.”

Williams said he was honored by having Colbert, of whom he’s a huge fan, host the event celebrating his film.

“I respect him so much. He’s my news source. He’s been my news source for a long time, him and Jon Stewart,” Williams told The Hollywood Reporter. “And to have him support the film and host this party means everything to me. It’s kind of a career highlight for me. I’m really excited. I’m really blown away and humbled.”

Suskind was also appreciative of the impact of Colbert’s support, saying of the Late Show host, “He’s one of the world’s greatest funnymen, but the guy runs deep and wide with an enormous seasoned heart from difficult things in his life.

“So he gets Owen. He totally understands Owen and how it feels to face challenges as a child. And he loved the movie from the beginning,” Suskind added. “So to have Stephen here, holding forth about his love for this movie and how it speaks to him, it’s a gift and a thing of joy for everyone in this room who loves Stephen. And they’re like, ‘If Stephen loves it, it’s a thing worth loving.’ That’s what we rely on Stephen for, to guide us. ‘Stephen sees it this way, I’ll buy that.'”

Suskind, who in addition to inspiring Colbert’s alter ego appeared on both Comedy Central’s The Colbert Report and the Colbert-hosted Late Show on CBS, shared his thoughts about the latter program.

“I think Stephen took a little while to move from an incredibly successful public act of The Colbert Report, which was stunning ingenuity, which is being copied everywhere, of being able to inhabit a character so fully and at the same time wink at the audience, in a sotto voce, meta conversation, but it was going to be hard to go from that signature character to a new show,” Suskind conceded. “But there’s no doubt that if you’re watching that show in the last couple of months, Colbert’s found his mojo. He’s now doing it. He’s found a place to stand in a divided country and do powerful shtick that, as we know, when done right can raise a mountain range. I mean I’ve written about things all around the world: people in democracies, leaders and dictators, too, now. If they laugh at you, it’s big trouble because in humor there’s power. … People like Stephen and Jon Stewart, in a divided country, end up as a destination — the only people who end up talking straight to the public through their humor. And comedians and artists have always been that and that’s a place where it’s expressed in present tense in this era, on the stage of those shows every night.”

While Owen, whom his father said was “loving” the hoopla around the film, couldn’t be there because he had to work early the next morning, his brother Walt was on hand as were Cornelia, Julie Taymor, Tituss Burgess and another inspiration for Colbert’s character, Stone Phillips, with whom Colbert posed for a photo, raised eyebrow and all. 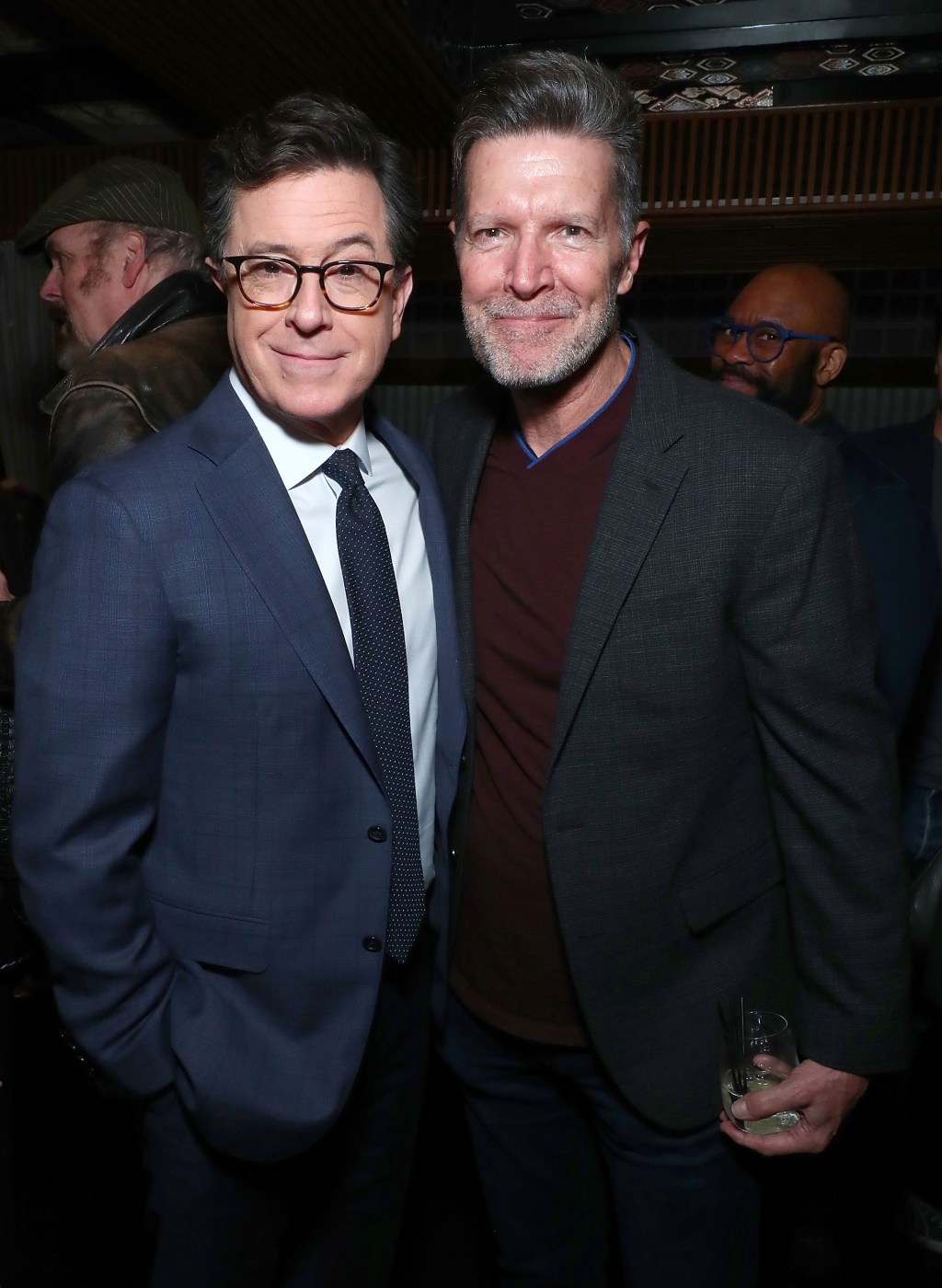