Sterling K. Brown has stretched himself a bit this year. The Emmy-winning This Is Us actor has turned his focus to other projects beyond the NBC show, such as a guest arc on Amazon Studios’ The Marvelous Mrs. Maisel and lending his voice to Frozen 2 as Lieutenant Destin Mattias. Plus, in A24’s Waves he took on a father figure who’s very different from Randall Pearson, playing a demanding dad with high expectations of his son, Tyler (played by Kelvin Harrison Jr.). The drama, helmed by Trey Edward Shults, debuted at the Telluride Film Festival in August to strong reviews and opened in theaters Nov. 15.

The 43-year-old St. Louis native and father of two sons spoke to THR about his process for picking characters, his new role as a producer and the anxiety of being black and excellent.

Talk about your process of choosing the roles you play, especially since you’ve had a mix of film and TV roles this year.

I’m always looking to do something different than [This Is Us‘] Randall, because I know I get a chance to do that 18 episodes a year for at least for another two years. It’s really flattering that people are attached to the character of Randall, but I’m real careful to make sure that people don’t confuse me [with] Randall. Now that people keep telling me that I make them cry all the time, I’m kind of eager to make them laugh a little bit — flex the old funny bone as long as I can.

You’ve lent your voice to Angry Birds 2 and the upcoming Frozen 2. What has drawn you to animation?

[My] kids, first and foremost — they’re 8 and 4. I went off and did The Predator — they can’t really watch that. I do This Is Us, and they almost can watch that, at least the 8-year-old, but not quite yet. It’s nice to be able to do something that I can take the family to. They were able to go to Black Panther — on a side note, be careful taking your son to see a movie where his father dies and then the person who plays his son in the movie dies as well. The animated joints hopefully won’t have the same level of trauma associated with them for my kids, and they can see what Daddy is doing in real time and not have to wait 10 years to check it out.

Waves deals with interpersonal relationships, particularly between a black father and black son. As a father, how has your performance impacted your view of raising young black sons?

It’s been kind of profound. I recognize within me a tendency or a desire to perform at the highest level, and have anyone associated with me, family or friends, associated at a very high level as well. My wife and I both went to Stanford University, and if our kid wasn’t reading by age 2, we were like, “Well, what’s wrong with him? Like, how come he’s not reading?” There is within both of us a desire to exceed expectations and to have our children exceed expectations. What the movie sort of highlighted for me is like, “OK, it’s OK to have high expectations, just as long as you’re willing to hear the voice of your child and as long as you create the space to make sure that they feel free expressing themselves, regardless of what they have to say.”

[In] the movie, Tyler is so fearful of disappointing his father, of not living up to his expectations, that when things started to go wrong, he felt as if he had to deal with them on his own, and he didn’t have the space or permission to share problems in a way and ask for help. I think children have to know that they will be loved regardless of their behavior. Obviously, you want their behavior to be a reflection of the way in which you want them to conduct themselves. But when we fall short of the mark — because we all do — they need to know that they can fall, they can fail and still be loved. 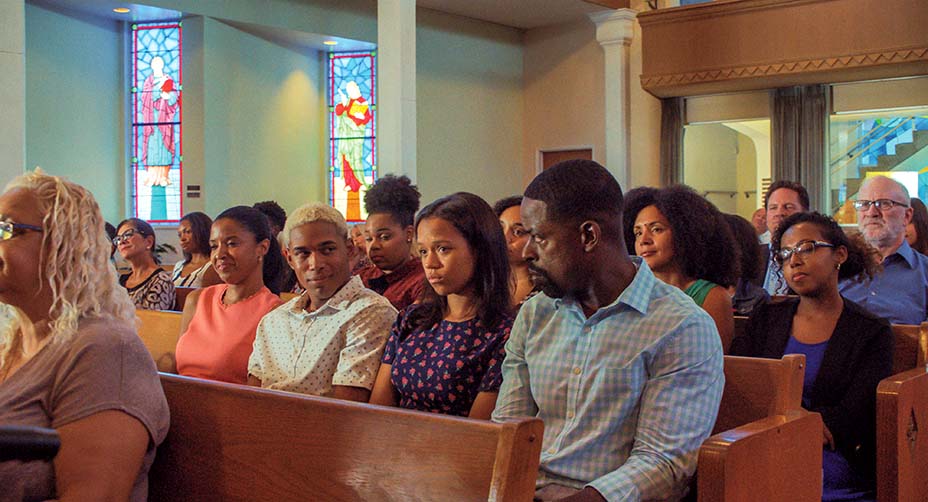 One of the themes in Waves is perfectionism and how that overlays with the anxiety that may come from “black excellence.” For a black man in the entertainment industry, is that a pressure you’ve felt in your career?

The short answer is yeah. I do sort of carry with me, for good or for bad, the idea that my actions have ramifications outside myself. And that if I don’t show up and be professional and put my best foot forward, it makes it that much more difficult for anyone who comes after me to receive similar opportunities. It is a pressure that I think I’ve lived with for such a long time, and it’s something that’s been so instilled from the moment that I started going to school. Your mom, your dad tell you that people are watching, and people are looking for you to make mistakes, because they already underestimated you. Your actions are a reflection upon your family, upon your community, and give them something to be proud of.

Has that pressure ever influenced the roles you choose?

As an artist, it’s interesting, because it doesn’t preclude my picking a variety of characters, but I am hopeful that black folks can have some sense of pride in the characters that they see me choose. But it’s almost like I have an eye toward what it is that I want to see onscreen, what it is that makes me feel good about being African American and trying to step into those shoes to fill a similar niche for everyone who is a consumer of media.

[So] it doesn’t prohibit me, but it’s so ingrained in me that I don’t know how to separate it necessarily. Like, I don’t want to do stuff that’s run-of-the-mill, I don’t want to do stuff that’s cliche, I don’t want to do anything that feeds into an idea that America “may already have an idea of who we are.” I like to expand the definition of us. I feel like that as many black people as there are in America, there are many ways of being black in America — unless that way of being black in America is anti-black. There’s room to see the diversity within the culture, and I hope that as my career continues to progress, we get a chance to see more and more nuanced performances.

What can you share about your upcoming role in The Marvelous Mrs. Maisel?

Maisel is going to be going on tour with Shy Baldwin. I’m part of Shy’s entourage, I can say that much. I can tell you what excited me about being on set is that most times I was there, there was a whole gaggle of black people. And as a fan of the show and the world that they’ve created, I’m glad that they’ve opened it up in such a way that color is present, because color was present during that time, and [the showrunners] the Palladinos had an eye toward expanding their world.

You have a few films and series that you’re producing coming down the pipeline. As a producer, what content piques your interest?

If it doesn’t have any color to it, I’m probably not going to be interested. I’m trying to see people of color, marginalized voices in the front and center of these stories. I think we take for granted oftentimes that people learn so much through media, especially in Middle America where you tend to live in fairly homogenized regions. And the only interactions that you may have with blacks or Latinos or Asians may come through your TV screen. And so [we’re] making sure that we attend to the responsibility of educating people and entertaining them simultaneously. A lot of the writers that come to me may not have been given opportunities before or their opportunities may be limited, but because I can lend my voice to it, hopefully that gives them access to a greater audience. And it’s a story that I realized or that I believe needs to be shared. I get excited and I have a desire to learn, because I don’t know everything, right? But when I read a story that illuminates something about a different culture, a different socioeconomic group, I get excited. And if it excites me, then I think that it’ll excite the public, and I want to try to usher it onto the screen.