Continue to The Hollywood Reporter SKIP AD
You will be redirected back to your article in seconds
Skip to main content
November 17, 2016 1:03pm

He’s not the first musician to host a pop-up shop on Fairfax Avenue, and he’s likely not the last, but Steve Aoki’s Dim Mak Collection temporary storefront isn’t your run-of-the-mill tour merch shop.

Whereas The Weeknd, Justin Bieber and even Jay Z have been hitting the epicenter of Los Angeles’ skate culture to sell $50 t-shirts screen-printed with their faces on them, the 38-year-old DJ is taking to the hottest street in West Hollywood to introduce to the U.S. market his luxury lifestyle label, Dim Mak Collection, which includes outerwear, pants, tops and hats ($90-$750).

“We’ve been learning what works and what doesn’t work in Japan, and it was just a matter of getting the pop-up shop and organizing the whole team,” Aoki told Pret-a-Reporter of choosing this moment to bring the collection stateside after almost three successful years in Japan. “This collection also feels more American,” he added. “A lot of the other collections were geared to the Japanese consumer — even the sizing —  but this time we took the best of what is Dim Mak, and what themes and patterns remain the strongest besides our slogan, and we combined them.” The U.S. pop-up, open through Saturday, also happens to coincide with the 20th anniversary of Dim Mak Studios, the record label Aoki founded.

The jetsetting DJ — whose signature long locks, beard and round sunglasses appear on a billboard nearby, advertising his New Year’s Eve set in Las Vegas — celebrated the launch Wednesday evening with pals including Shawn White at a party hosted by The Seventh Letter, which sits across the street from the infamous Supreme store. 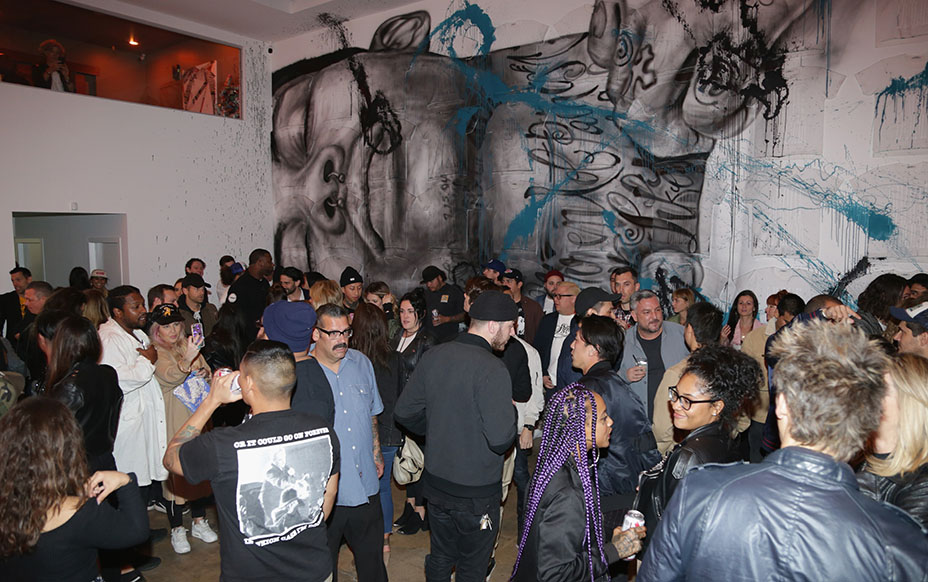 During the the label’s four seasons in Japan, Dim Mak Collection was picked up by retailers like Opening Ceremony and Youth by United Arrow, and is only continuing to gather steam. Much like Kanye West’s Yeezy collection, or rapper Tyler the Creator’s Golf Wang line, Dim Mak isn’t just about selling merchandise branded with his company’s “By Any Means Necessary” slogan (though there are plenty of pieces emblazoned with the phrase).

The Japanese American musician, who was raised in Newport Beach, Calif., by Hiroaki Aoki — a former wrestler and founder of the Benihana restaurant chain — referred to Dim Mak as a passion project more than 20 years in the making. “I was screen-printing my first t-shirts at age 15 in my mom’s closet,” he said. “That was 25 years ago. But when I first made my own line — a bunch of t-shirts — I showed at MAGIC [the tradeshow in Las Vegas] in 2006. They gave me a booth and I deejayed for them for free, and that was my first intro to competing in the world of fashion.”

Aoki noted, however, that while he started with tees, a luxury label was always the end goal, one he was only able to realize after teaming up with Parco in 2013. “They understand what I’m looking for and can really convey my mood boards and my vision and pick interesting materials,” he noted of his team’s ability to find the unique Japanese textiles reminiscent of the thick knits used in judo or karate uniforms, as well as the high-end synthetic performance materials which lend a sportswear feel. “We have Japanese craftsmanship, manufacturing and design with more of an American cultural angle, and that really represents who I am as an artist, as someone who’s living [in America] and who is Japanese. ”

Currently, the fall collection is only available direct-to-consumer through Dim Mak Collection’s website as well as the pop-up store on Fairfax (Aoki says he plans to open more pop-up shops, which will be part of a mural series collaboration with the local artists). However, he hopes to reach more retailers following his presentation at New York Fashion Week: Men’s, next January. Can we expect a Yeezy-like, consumer-facing extravaganza from the DJ, who is known for his epic parties?

“We haven’t decided yet, but we want to do something unique,” Aoki said coyly. If the L.A. pre-launch party — which featured a live creation of a t-shirt wall mural by artist Drew Merrit and a performance by one of Aoki’s favorite punk bands of his childhood, Gorilla Biscuits — is any indication, it’ll be something that fuses the artist’s love of art, music and fashion. 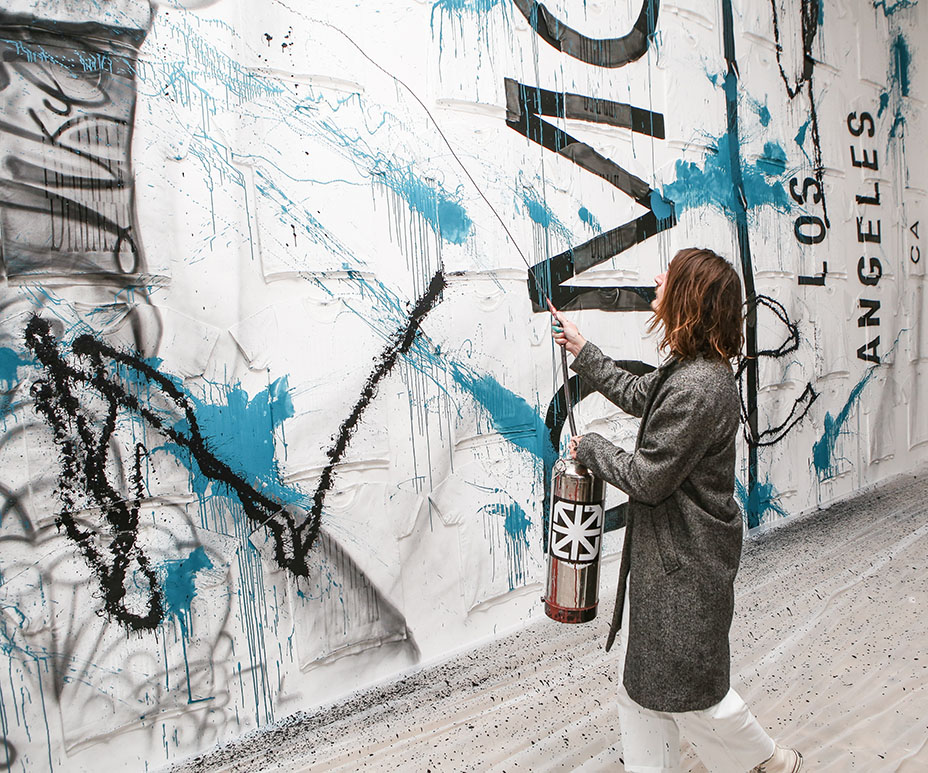 In addition to his massive Dim Mak undertaking as well as his continued performances, the DJ had a busy fall campaigning on behalf of Hillary Clinton, not only performing at the Democratic presidential candidate’s rallies but also attending the second presidential debate. He praised the anti-Trump rallies taking place in L.A. and across the country (“I love that!”), but added, “The sad part about it is that the people that really care, the people that are out there protesting — a lot of them probably didn’t vote. The millennial vote was the lowest voter group. ”

When asked if he would ever infuse any political messages into the Dim Mak Collection, Aoki said, “At the end of the day, the punk hardcore movement — the movement that got me involved in Dim Mak and all this from the very beginning — it’s a rebellion against the norm. Right now, with Trump being president, this idea of punk and rebellion is going to be strong. And it doesn’t necessarily have to be with guitars, either.”