Plastic single-use water bottles have become so commonplace on film and TV sets that sharp-eyed viewers earlier this year spotted one in the background of a scene in Little Women. And although many bottles do get recycled, when it comes to sustainability, there should be a better way to sate a thirsty crew.

Bluewater Group believes it has found an answer.  Since 2013, the Sweden-based company has been a leader in innovative clean water purifiers and environmental solutions. Its latest offering is the Bluewater Trailer, a mobile purification unit designed to bring this refreshing technology on location including film and TV sets.

The path to the trailers began in 2017 when Bluewater Group became the official water supplier and sustainability partner for the Volvo Ocean Race. Hydration stations were set up at every stopover throughout the competition, providing spectators contaminant-free drinking water from public dispensers. Bluewater then created the trailer, which debuted last September at the Sanlam Cape Town Marathon in Africa. Four units placed along the route allowed runners carrying reusable containers to fill up and avoid plastic water bottles.

Then came its showbiz break.  When Raised by Wolves — the new HBO Max sci-fi series that boasts Ridley Scott’s first foray into television directing — was preparing to film on location throughout South Africa’s Western Cape, Grant Kilian, the show’s logistics manager, wasn’t thrilled by the idea of lugging plastic bottles from site to site. So he started to look around for an alternative. 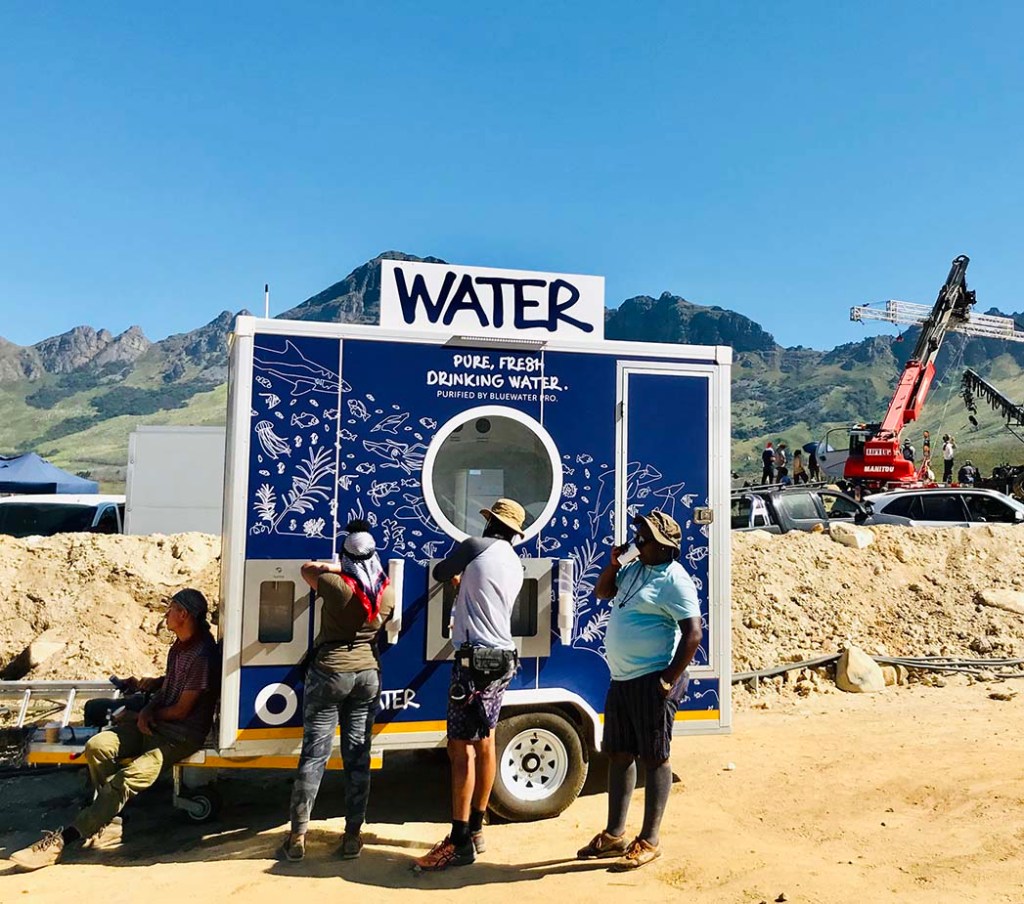 That’s when Kilian learned from his trailer supplier about what Bluewater was doing. “It’s been a success from day one,” says Cheryl Eatock, Raised by Wolves’ line producer. “Besides the obvious benefit to the environment, the trailers work out to little more than a whopping 50 percent savings. Actual data in terms of how many bottles of water were substituted on Raised by Wolves is close to 100,000. This is beyond significant and spoke directly to supporting our green sustainability initiative for the whole production.”

With a target market of providing water for events and film productions, each trailer measures approximately 13.5’ x 5’ x 11’ after it has been set up at a location. “It is approximately the same size and dimensions as a mobile VIP toilet or changing room and can be moved around in the same way when towed behind a small pickup truck or SUV,” says David Noble, Bluewater Group’s PR and communications director. “This was intentional, as it helps event teams with their special planning and unit production movement schedules.” The trailers employs Bluewater Pro 400, which harnesses a patented second-generation reverse osmosis purification process called SuperiorOsmosis™. Featuring a built-in water tank, the trailer delivers refreshingly cold water from four separate dispensers. Each spigot can dispense approximately half a gallon in under a minute. It gives a trailer the ability to generate up to 1,850 gallons of pure water every day by tapping any common source, whether potable or non-potable. The water is not only safe, but great tasting.

But the Raised by Wolves team wanted more. “The Bluewater team came to meet with Grant and did a demo,” continues Eatock. “We pushed the envelope by asking for the trailer to deliver both still and sparkling water. Bluewater made that happen for us.”

Eatock adds that the trailers include SIM card technology, allowing the production to monitor daily usage. “Gone are the days of plastic water bottles stocked on trucks or pallets in storerooms,” she says. There are currently 10 Bluewater trailers operating in South Africa. Two more are in use in Sweden. “The trailer has been upgraded multiple times since the first iteration as we have sharpened and better understood the full range of environmental and user demands placed on the system for different event or production types” adds Noble.

Efforts to bring the Bluewater Trailer to the United States were put on hold when the coronavirus hit Europe at the beginning of the year. The company had reached out to several U.S. shoots before the shutdown and Noble anticipates that once production ramps up again, it won’t be long before the Bluewater taps will flow stateside. “A key focus for the foreseeable future will remain TV and film production sets and all types of events where there is an emphasis on supplying on-demand purified water to large groups of people and halting the need for single-use plastic bottlers and their transportation,” he says. “Wherever people are coming together in groups outside, we see an opportunity.” Noble estimates that the trailer eliminated the need for 139,142 single-use plastic bottles during the production of the HBO Max series.

If the Raised by Wolves crew is any indication, the sooner it happens, the better. “We have had nothing but positive feedback,” says Eatock. “We work in challenging locations and the crew was very excited to have cold still or sparkling water. It’s clear that these water trailers are the way forward. We hope to see them on all productions in the future!”