Stranger Things is clearly looking to give Los Angeles superfans the ultimate immersive experience. Following last week’s takeovers of Santa Monica Pier (which was transformed into the Hawkins Fun Fair) and Santa Monica High School (which hosted the high-fashion premiere party), the Netflix series’ nostalgia-heavy promotional blitz for season three continues with the transformation of a Baskin-Robbins in Burbank that officially kicks off on Wednesday.

Through Sunday, July 14, the shop will double as Scoops Ahoy, the nautical-themed ice cream parlor (and employer of Joe Keery’s character, Steve) that is a favorite hot-weather hangout for Hawkins’ heroes. The immersive takeover will transport sweet-toothed Stranger Things fans to the summer of ’85. Save for the modern-day cash registers, the 1,200-square-foot space pays proper homage to the show’s throwback setting. (Even the staff’s uniforms and the drive-through got a makeover.) 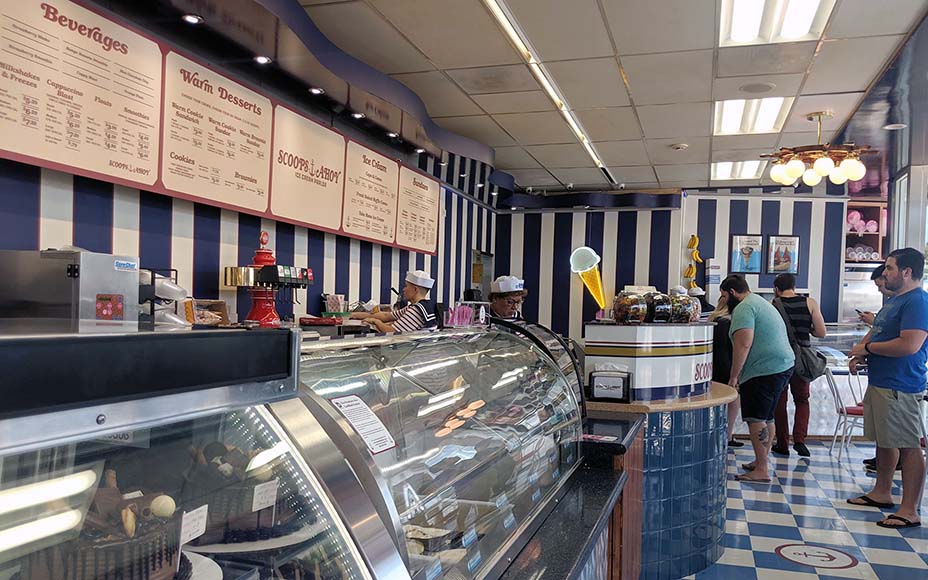 To transform Baskin-Robbins’ L.A. flagship (which is also a training center and previously housed a production facility), Stranger Things creators Matt and Ross Duffer granted the ice cream and cake company exclusive behind-the-scenes access: “We read the scripts back in October; [the Duffer brothers] allowed us in their offices and we got three hours to read,” David Nagel, Baskin-Robbins senior director of consumer engagement, told The Hollywood Reporter at the Scoops Ahoy shop on Tuesday.

“You can’t possibly read the entire season, so we were all reading different parts. I got the fun job of reading the finale first,” says Nagel. The team was also tasked with binge-watching the new episodes early. “It was a lot of fun [even with the spoilers] because that gave us the ability to be more inspired, be deeper involved in the creative process,” adds Nagel. “Really, to create an experience like this, it’s all about understanding what is going to happen in the show.”

Scoops Ahoy sails into Baskin-Robbins at 1201 S Victory Blvd in Burbank, CA starting TODAY! Swing by now before we lift anchor on 7/14. Ahoy!

The Stranger Things partnership began rolling out nationwide in June and included additions such as the Demogorgon Sundae (a waffle bowl inspired by the grotesque creature), the Byers’ House Lights Polar Pizza (a chocolate chip cookie topped with Snickers ice cream and M&M “Christmas lights”) and the Elevenade Freeze (a vanilla ice cream and Minute Maid lemonade smoothie). Joining the menu in July is the USS Butterscotch, a toffee-infused flavor that can be ordered as a banana sundae, complete with waffle sails and scoops of chocolate and strawberry ice cream. The limited-edition offerings are also available to take home in collectible quart tubs, and the Burbank location also stocks exclusive merchandise, such as stickers, magnets, shirts and Funko Pop! figurines of Steve ($2.99 to $24.99).

Naturally, the store houses an Instagram-worthy, ship-themed photo opp wall (a set-like creation in itself, says Nagel) with wood paneling, brass portholes and a working brass bell. The shop’s floors and walls were covered in blue-and-white checkered and striped vinyl, freezer door handles were swapped out with nautical rope and every visible Baskin-Robbins logo (even on napkin holders and the sliding glass doors) was replaced with the fictional dessert counter’s anchor logo. Of course, there are plenty of Easter eggs for fans to discover. 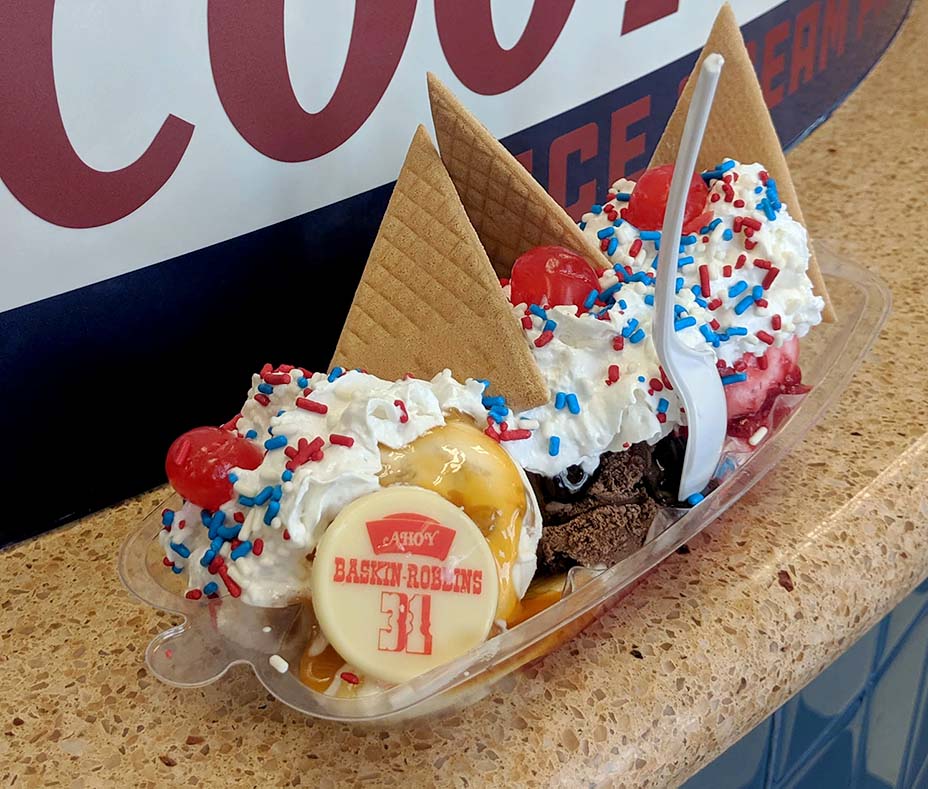 To pull it all off (and then some), Baskin-Robbins worked closely with Stranger Things set designer Jess Royal on the interiors. “She was talking about all the detail and research that she goes into, so we started doing our own research about the ’80s and how we could be totally authentic. Everything we’ve done, we’re matching to the show, even down to our TV commercials,” says Nagel. The brand’s research and development team (“They are the best anywhere; they’re a mix of food scientists and chefs”) whipped up the menu.

The show is clearly on a major collaboration kick. Leading up to this week’s premiere, Stranger Things die-hards have been able to order an Upside Down Whopper from Burger King, ride on a special edition Mongoose BMX bike (which is now sold out on Target’s website), sip on New Coke and experience the Upside Down at Wrigley Field. There have also been an array of recently released Stranger Things fashion collaborations with Levi’s, H&M and Nike — meaning you can sport Eleven’s Aztec print shirt, play Hawkins Pool lifeguard in a red swimsuit or trunks or pair your retro Cortez kicks with Hawkins High sweats.

Take a turn for the strange. Levi’s® x Stranger Things. . Explore the collection 07.01.

More on that flashback ad: It’s set to drop the Friday after season three hits Netflix. “We shot it with 1985 equipment [on] film; we shot on lenses from 1985 and we cut it together with movements, techniques and things that they used back in the ’80s, like all the onscreen Chyrons and everything shot in four-three [aspect ratio],” says Nagel.

“There’s one more surprise coming out later this week,” he hints. Nagel had to remain tight-lipped about the latest interactive element, but “since everything that we’re doing is completely authentic to 1980s, it’s a digital [’80s] thing, but it’s not a modern-day digital thing.”

Those who missed out on the pier festivities (or want to relive the branded experience) can jet to the Big Apple, where the Hawkins Fun Fair is headed to Coney Island this weekend, running from Friday to Sunday. Visitors can expect a Curiosity House, ’80s cover bands, games, a photo booth and plenty of selfie-ready backdrops at the Brooklyn attraction.