Want to check out the new Lost in Space? You’ll need Netflix. New Star Trek? Get a subscription to CBS All Access. Cobra Kai, the series based on the Karate Kid movies? That one requires a YouTube Premium subscription. Jonesing for access to a Marvel superhero show still in the planning stages? That one likely will require you to pay for the upcoming streaming service from Walt Disney yet to be named.

Indeed, with all the disparate digital offerings — which also include Hulu, Amazon, Jeffrey Katzenberg’s forthcoming shortform TV platform Quibi and more — consumers will need to pay for so many different subscriptions that some may throw in the towel and simply stick with the much-maligned cable bundle.

This is the challenge faced by Warner-Media, which announced Oct. 10 that it will jump into the game with a product planned for the end of next year that could include old Warner Bros. fare like Harry Potter movies and the Friends TV series alongside HBO shows, Looney Tunes and a plethora of content featuring DC superheroes.

“My job isn’t to build another Netflix,” WarnerMedia CEO John Stankey said in announcing the new venture. “Our job is to build a compelling offer of content.”

But, of course, competing with Netflix is the whole point, given that the 21-year-old business has surged to 130 million subscribers worldwide at the end of the second quarter and has caused rampant cord-cutting (33 million U.S. households by year’s end, according to eMarketer). Investors, in fact, are demanding a Netflix-like product since shares of the leader in streaming have surged 200 percent in two years, vastly outperforming traditional media. Shares of AT&T — which closed its $85.4 billion acquisition of Time Warner in June and changed the name to WarnerMedia — are down 10 percent in the same frame.

A study from Nielsen released in August found that 66 percent of a representative sample of Americans reported paying for a subscription-on-demand video service. The average respondent in that survey paid for roughly three services. “It doesn’t make sense for every network group to own its own streaming service. There’s a shakeout coming,” says eMarketer analyst Paul Verna. “Suddenly, all those cable channels for 100 bucks doesn’t seem like such a bad deal.”

In the case of WarnerMedia, the new streamer also will compete with itself, as Stankey says its HBO Now service at $15 a month will co-exist with the coming offering and retain its distinctive branding within the app. Plus, there are digital skinny bundles called AT&T Watch and AT&T Unlimited & More Premium, DirecTV Now and FilmStruck, which features classics like Casablanca, Lawrence of Arabia and the 1954 version of A Star Is Born.

WarnerMedia has “too many different digital TV products,” says Steven Birenberg, founder of Northlake Capital Management. “They should have all the direct-to-consumer products under a single brand and as few products as possible.”

That may be the future, though WarnerMedia would not comment further, and, in fact, the future may be to bundle different streamers from different companies at a discount price, much like cable companies sell channels from Viacom, Discovery, AMC Networks, etc., for a single monthly fee. “It will be more convenient and economical to have these services bundled rather than priced and sold a la carte,” says Ben Weiss, chief investment officer at 8th & Jackson Capital Management. “With all the energy and resources required to keep up with subscriptions and content, appreciation for the ease of pay TV grows,” PwC concludes in a recent report.

There’s also the matter of multiple boxes. Facebook’s streaming and original programming app Watch, for example, doesn’t play with Roku. This is the same issue that stalled TiVo’s growth, as consumers preferred to get their DVRs through their existing cable receiver rather than stack another box on top. “Pay TV solves many of the issues that surround streaming, creating a relaxed and efficient viewing process,” says PwC in its report.

Helping to further fragment the world of streaming is retail behemoth Walmart, which is getting more serious about its languishing Vudu product. The company said Oct. 11 that it struck a deal with MGM for new shows, beginning with a new version of Mr. Mom, the 1983 movie starring Michael Keaton.

Disney is slowly yanking its content from Netflix to populate its service, and Warner-Media is expected to follow suit, which will keep Netflix spending heavily for new content (it is doling out $8 billion for original and licensed shows and movies this year alone).

If bundled streaming becomes a thing, Hulu may be in the catbird seat, says Michael Pachter of Wedbush Securities. When Disney completes its $71 billion acquisition of most of the entertainment assets of 21st Century Fox, it will own 60 percent of Hulu, while Comcast maintains 30 percent and AT&T keeps its 10 percent. “Rather than charging $10 each, they can layer on top of Hulu,” says Pachter. “They could charge $10 for Hulu and $5 for a Warner or Disney or sports layer plus another $10 for HBO on top. This way, they could push all of their content at a higher overall price and cut Netflix off completely.”

Bob Iger’s Disney, though, has its heart set on a streamer that will include Marvel, Lucasfilm and Pixar content as well as some of the best stuff it gets when it acquires the Fox film and TV studio. And many analysts see Disney’s product as the biggest threat to Netflix’s dominance.

But WarnerMedia’s secret weapon is also its well of existing subscribers: AT&T has 25 million pay TV subs, mostly via DirecTV, and 100 million wireless subs — and as many as 55 percent of Americans sometimes use a mobile device to watch TV, up from 36 percent a year ago, says PwC.

While competing with Netflix seems straightforward enough, the traditional entertainment conglomerates might find it more difficult to go toe-to-toe with the likes of Apple, Facebook, Google and Amazon, where there are very deep pockets of cash and incentives to spend on content — even to the extent they lose money on the deal.

“They’re in it to monetize their platforms more broadly,” notes Birenberg. “If traditional media companies are still required to make money, eventually they are going to have to face the music on their unscaled direct-to-consumer and over-the-top services.” 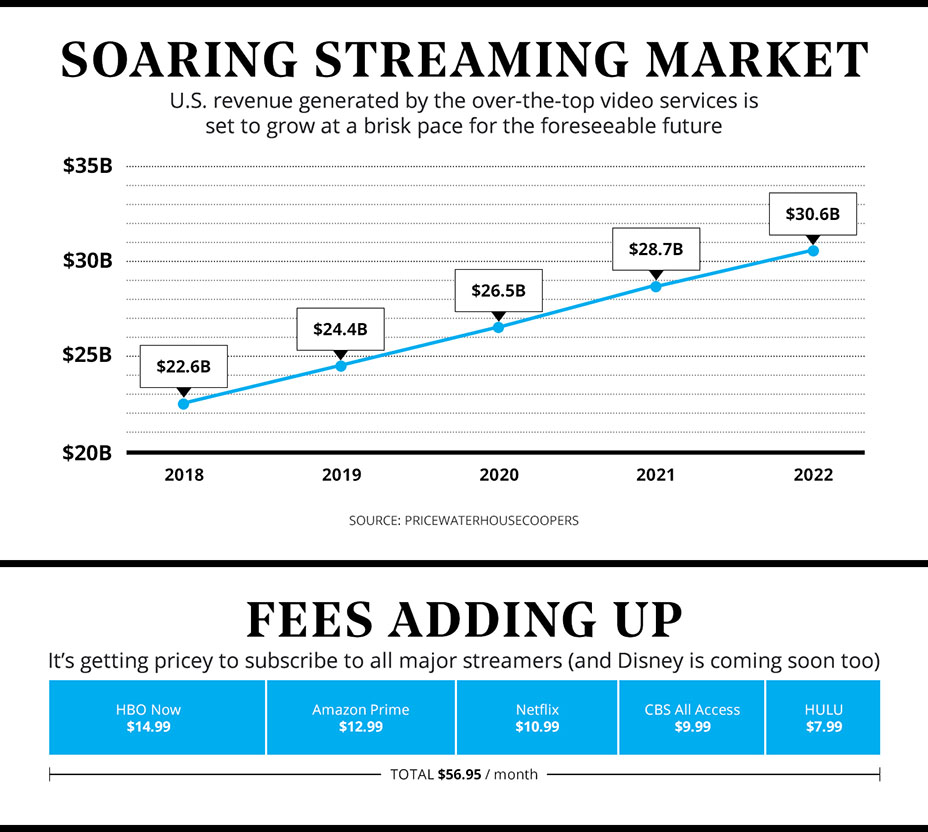 This story first appears in the Oct. 17 issue of The Hollywood Reporter magazine. To receive the magazine, click here to subscribe.

What's Behind Netflix's Sky-High Employee Salaries: "It's Like Play Money"