Continue to The Hollywood Reporter SKIP AD
You will be redirected back to your article in seconds
Skip to main content
November 13, 2019 6:55am

As Disney CEO Bob Iger kicked off the streaming wars in earnest with the launch of Disney+ on Nov. 12, the TV industry’s pivot from linear broadcasting to direct-to-consumer platforms is igniting a battle over residuals that could see once-in-lifetime dual union strikes in mid-2020. Not since 1960 have Hollywood’s writers and actors walked out in unison — but not since the postwar collapse of the studio system and rise of television has the filmed entertainment industry been seized by such epochal change.

The canary in the digital coal mine? In most labor deal cycles, the Directors Guild of America reaches an agreement at least a half-year in advance of its June 30 master contract expiration via prenegotiation in the fall and formal bargaining in late November or early December. But this year, a source close to the matter tells The Hollywood Reporter not to expect formal talks between the DGA and the Alliance of Motion Picture and Television Producers (AMPTP) until sometime after the new year.

The stumbling block, per multiple sources, is a union effort to revise the existing streaming residuals formulas, the calculations that determine what writers, directors and actors get paid as original or acquired product is exploited domestically or overseas on subscription video-on-demand platforms like Netflix and Disney+ or on ad-supported platforms like NBCUniversal’s forthcoming Peacock. As linear television residuals decline, grasping more of the SVOD upside without losing the protections of the existing formula is do or die for the unions. According to sources, the DGA has been spearheading analysis of this issue for months, with a source adding that SAG-AFTRA is more in the loop in this triennial bargaining cycle than in prior years.The performers’ union’s board approved confidential negotiating proposals in July, while the WGA plans to craft its package of demands closer to the start of talks next year and the DGA has made no announcement as to its proposals (and generally doesn’t).

“We have engaged in our normal process,” says a DGA spokesperson. “We’ve been continuously working on our research and forecast.”

If the directors negotiate first as expected, their efforts likely will end up benefiting the writers and actors guilds as well through a mirroring process called “pattern bargaining,” while the International Alliance of Theatrical Stage Employees (IATSE) and Teamsters, whose pension and health fund is partially funded by residuals, may have to refight the same battles. At the rear is the musicians’ union, which doesn’t yet enjoy streaming residuals at all despite above-the-line guilds achieving special high-budget SVOD formulas two cycles ago. Talks this year between the American Federation of Musicians and AMPTP have been inconclusive and a series of rallies such as one Nov. 12 targeting Disney have been ineffective. For the AFM, the SVOD formulas have remained out of reach.

Those formulas, which the DGA pioneered in 2014 and improved on in 2017, focus on original content and are similar across the three above-the-line guilds. The residual is a single payment per year. The amount declines year by year, but the only other variable it depends on is the size of the platform, measured in terms of domestic subscribers. (In that respect, there are echoes of the DGA’s prescient 1981 sub-based pay TV formula that scaled up as HBO grew.) A show’s viewership doesn’t matter, which means if a show performs well, the residuals don’t reflect the upside. Conversely, if a show underperforms, talent doesn’t suffer, as long as the show keeps being offered on the platform as library content. And that’s the challenge for guild negotiators: Crafting formulas is difficult without ratings transparency, yet streamers withhold most data, and Nielsen and Comscore analytics are not broadly accepted.

Sources close to the matter, who spoke on condition of anonymity, seem split on how new formulas should work: “Subs are irrelevant!” one tells THR, arguing that formulas should be based only on viewership or minutes watched, which would require the streamers to reveal this data. But another well-positioned source cautions against ignoring subscribers, noting that many shows don’t overperform. (The two sources also express dissatisfaction with SVOD formulas for acquired product, which are based on the license fee, and AVOD formulas may also be in play.)

The guilds aren’t the only talent advocates with concerns: Credible viewership data would seem useful to agents and attorneys too, helping them make the case for more lucrative compensation or providing a structure for bonuses, analogous to theatrical box office bonuses, that could take the place of disappearing back-end participations. But surprisingly, reps are divided. On the one hand: “Agents want to know what their client’s work is generating for the companies that they are partnered with,” says one senior agency source. “That means sharing and revealing data that proves engagement with platforms because of the shows, stars and events that are made available there.”

But another senior agency source has a contrary view: While linear television “was a metrics business,” the source says, “I don’t think we want to know [SVOD] viewership. Audiences are smaller, and not a lot of people are finishing these shows. I don’t believe lack of data has affected our dealmaking.” Echoing that view, “I don’t care how well [my client’s show] did,” says a veteran entertainment lawyer, speaking of a highly touted series. “I know it was a breakout hit for them. I was almost happier not knowing [viewership because] it allows us to give more weight to Emmy and Globe nominations and awards” — factors the attorney says once were deemed less relevant by studios. And besides, the attorney adds, even in the ratings-rich world of linear television, “we never had perfect information.”

Conversely, argues former Metropolitan Talent Agency head Christopher Barrett, “any additional information you can have is useful to understand the value to the buyer.” But he adds that “the metrics need to be redefined” — and that’s hard when there’s no consensus on what and how to measure. Start with subscribers. Is it misplaced to focus on domestic, as opposed to worldwide, sub counts? And just what is a subscriber, in a market where some services are provided as free add-ons? That’s a question that affects not just Amazon’s service (should every Prime member count, even those who watch the video content seldom or not at all?), but also Disney+, Apple TV+ and Peacock, which are pitched as free for extended periods or indefinitely to Verizon, Apple device or Comcast customers.

And if counting subs is hard, viewership metrics are even more elusive. “The criteria for what is a view are all over the place,” says another entertainment attorney. Netflix says it counts any session where the user watches 70 percent of a movie or of one episode of a show, while other services may have their own definitions. And rather than an all-or-nothing approach, some platforms may pay more attention to minutes watched per month, the attorney adds. Indeed, Netflix CEO Reed Hastings said Nov. 6 that “the real measurement will be time.”

Beyond Subs and Views

But viewership metrics don’t always tell the whole story — or even the right one. While the relevance is obvious for AVOD services, SVOD services rely on subscriber dollars, not viewer-dependent ad buys. That means the value of a series to a subscription platform might be better measured by how much the show contributed to subscriber acquisition or retention (think HBO and Game of Thrones). And even sub fees aren’t always the goal: Amazon chief Jeff Bezos wrote in 2018 that “Prime Video continues to drive Prime member adoption and retention,” and that in turn drives purchasing behavior: “It’s how our whole model works,” he told THR in 2015. “When people join Prime, they buy more of everything we sell.”

Similarly, one senior agency source speculates that Apple’s revenue model for its newly launched service may depend more on in-app purchases of other services such as HBO rather than the low $5 per month fee. For some streamers, analysis of this collateral behavior may be the real success metric, though few people outside the platforms really know. “It’s a black box,” says a senior agency source who scoffs that most of what little the streamers have released to date is just “self-serving marketing to buoy stock prices,” and as for actual success metrics, “good luck getting that data.”

That could change, though. “Transparency is important to us,” a Netflix spokesperson tells THR. “So we’re working to share metrics about how individual shows or films performed with directors and producers — starting in the EU and North America. Once we understand what information is most useful, we’ll look at sharing it in more countries.”

For their part, it seems likely the guilds will try to obtain some kind of success data and monetize it as residuals in a complicated game of 3D chess, which in one scenario could even see the DGA cut off talks and challenge the AMPTP to first make a deal with the more contentious Writers Guild of America. (The scribes’ May 1 contract expiration precedes the DGA’s and SAG-AFTRA’s expiration by almost two months.) That could lead to a strike by the WGA — already locked in a legal and tactical battle with the major talent agencies — and then an actors’ walkout while the strike-averse directors wait in the wings, idled even if not actually on strike.

Adding a dimension: SAG-AFTRA cut a separate three-year deal with Netflix on July 20, meaning that a performers’ strike would halt new production for the likes of Disney+ but not Netflix, an outcome that Disney chief Iger will surely want to avoid.

Yet unlike in yesteryear, when the major studios had parallel business models and Universal mogul Lew Wasserman could speak for a unified management bloc, no one today seems likely to fill those shoes, not even Iger, whose own corporate interests are so divergent from those of Netflix (now a direct competitor), Amazon (with its different business model), Sony Pictures (an agnostic supplier to all) and many of the other major studios and networks (each a walled garden). Further complicating things, many of the studios are under new management or ownership, and Iger himself is scheduled to retire in 2021. And while a fractured AMPTP increases union leverage, it also ups the likelihood of a strike by making communication and coordination more difficult.

As companies place multibillion-dollar bets, Hollywood union members are angry, says a source close to labor, which is also a reflection of the national political climate and a winner-take-all economy. And as the streaming — and guild — wars intensify, says a senior agency source, “The subject of success metrics is the only thing we are all going to be talking about in the coming years.” 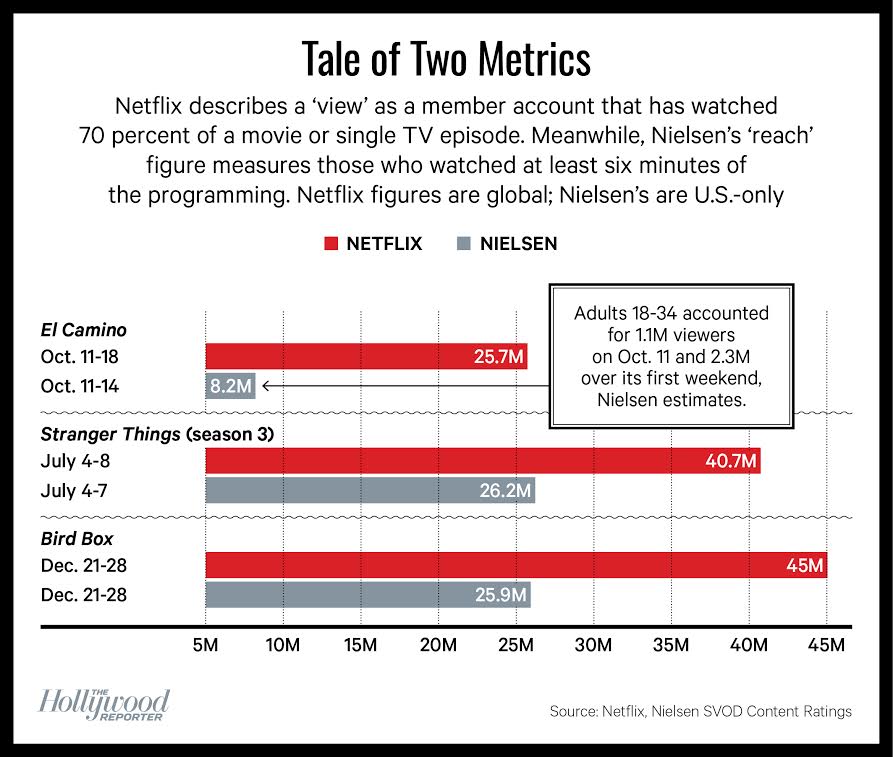