With a nod to the Oscar-nominated Three Billboards Outside Ebbing, Missouri, conservative street artist Sabo has hijacked three billboards in Hollywood to attack the entertainment industry for allegedly shielding pedophiles.

Reminiscent of the signage in the Martin McDonagh film, which is up for seven Oscars including best picture, with black text on a field of red, three consecutive billboards in Hollywood sprang up Wednesday, each calling out the industry.

“And the Oscar for biggest pedophile goes to …” reads one sign.

Another says, “We all knew and still no arrests.”

A third billboard reads: “Name names on stage or shut the hell up!” 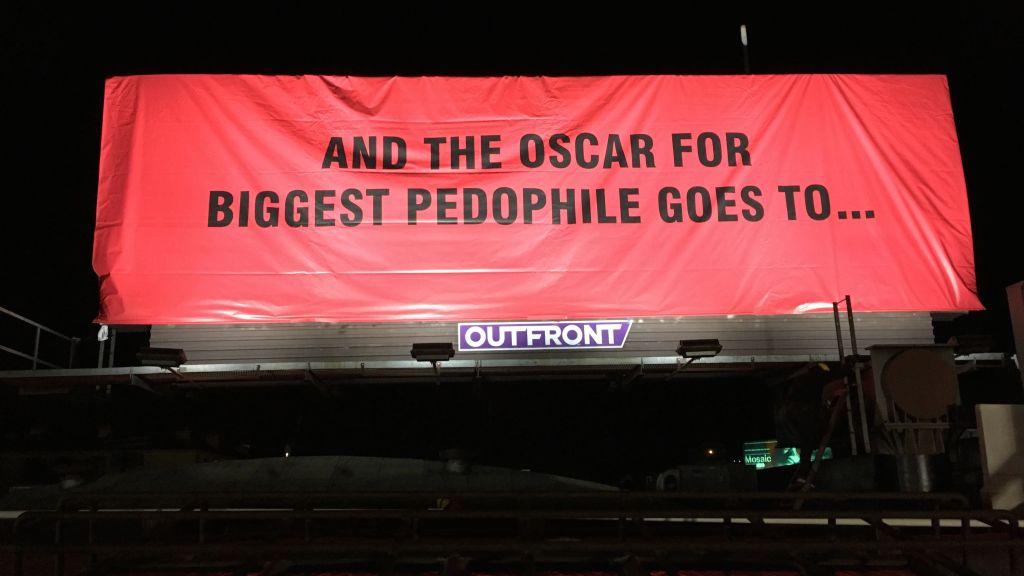 Until the artist, who goes by the name Sabo, took over the signage early Wednesday, the billboards were legitimate advertisements. Sabo manufactured fake overlays measuring as large as 48 feet across by 14 feet high and hired a crew of six men to help with installation, he told The Hollywood Reporter. 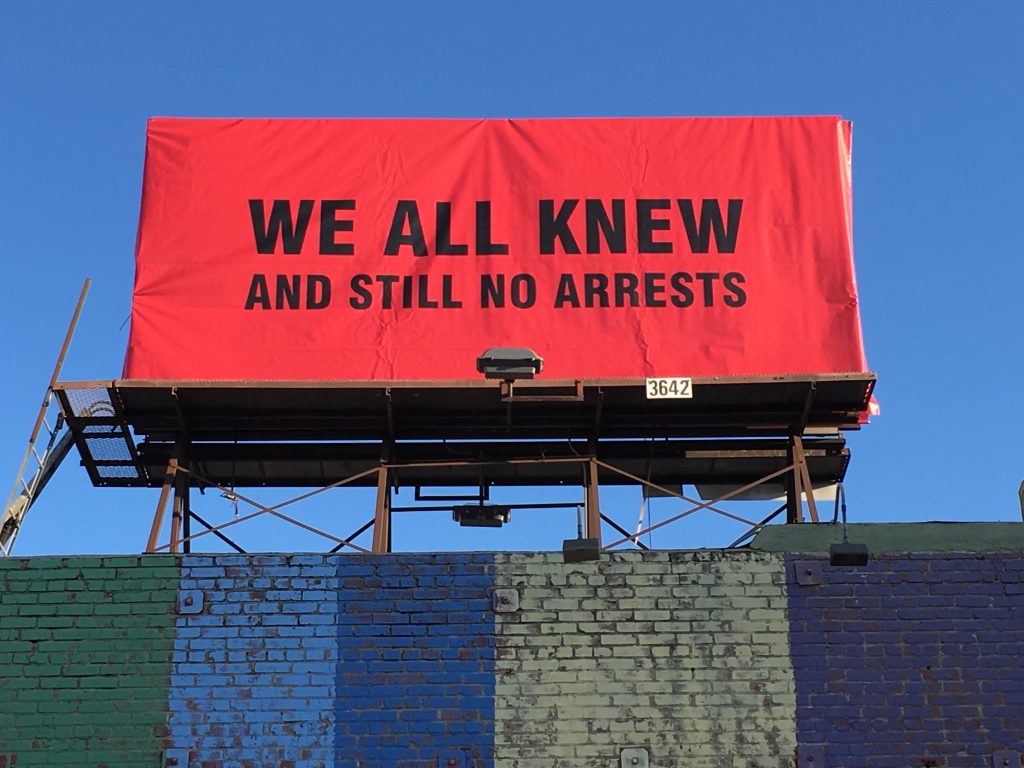 Sabo has posted faux ads attacking Hollywood on other occasions, but he said he considers the hijacking of three giant billboards on a single day his largest mission yet. The last time he took over a billboard was in November when he altered a sign for The Greatest Showman to make it appear like Sen. Al Franken was grabbing at Zendaya, who starred as a trapeze artist in the movie.

Franken, a former Saturday Night Live actor, has since resigned from the Senate amid allegations that he sexually harassed women, and nearly 100 other men in the entertainment industry also have been publicly accused of sexual misconduct since claims were made against Harvey Weinstein nearly five months ago.

Sabo says his signage is meant to criticize those who allegedly enabled sexual harassment with their silence, and to tell celebrities they should refrain from preaching during their Oscar acceptance speeches — for this one year, at least. 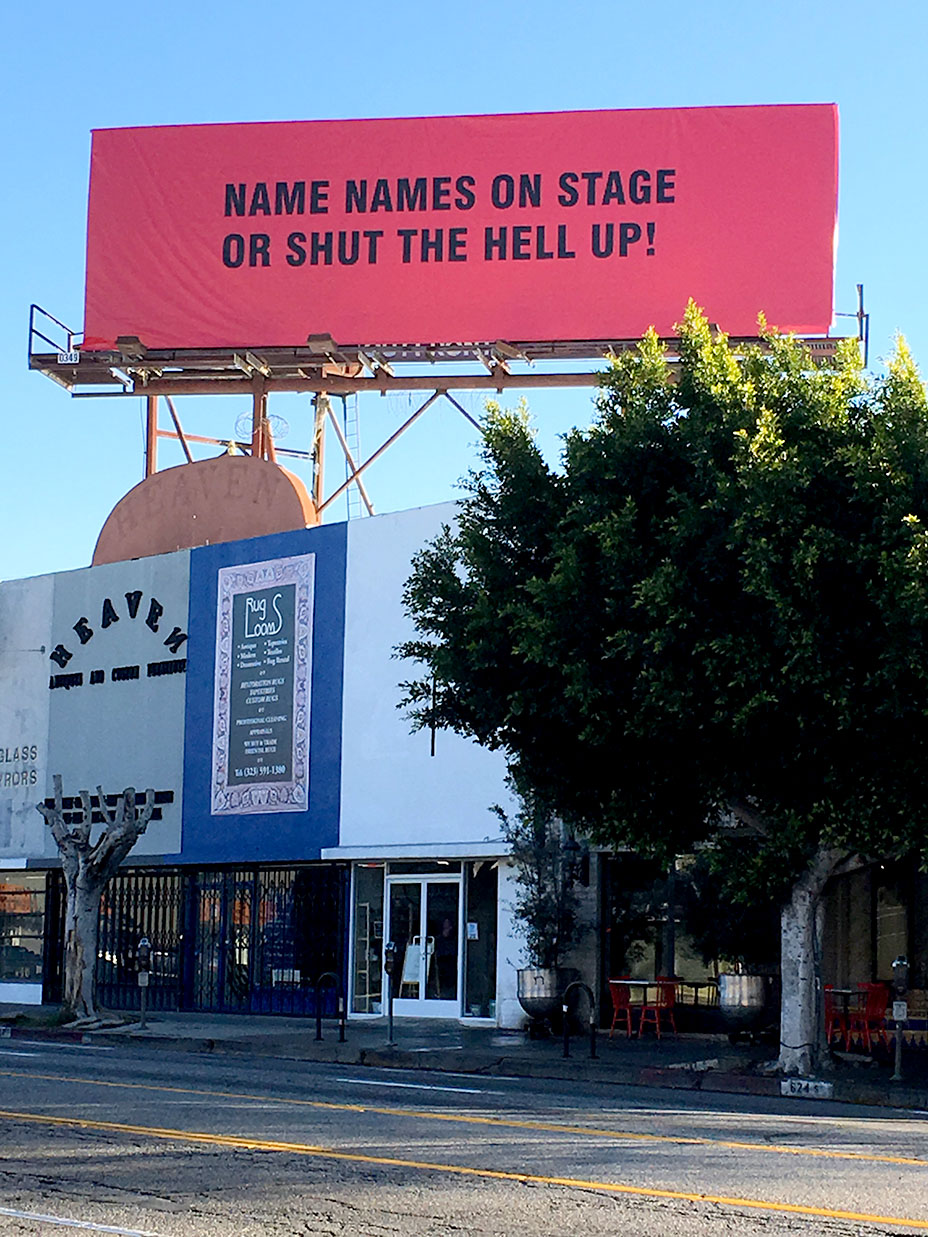 Three Billboards, the movie, is considered a frontrunner for best picture at Sunday’s Oscars, which will be held at the Dolby Theatre a few miles from where Sabo took over the three signs Wednesday.

In the film, Frances McDormand plays the mother of a raped and murdered daughter who posts billboards with angry messages aimed at the cops in her small town because she thinks they have not done enough to pursue whoever assaulted and killed her daughter. “Still no arrests?” reads one of the billboards in the film — with black letters on a solid red background.