Beyonce Drops Full Pregnancy Shoot on Beyonce.com [Beyonce.com]
After surprising her fans Wednesday with a stunning pregnancy announcement on Instagram, Beyonce gave the Bey hive even more to drool over by dropping a full photo shoot, as well as a few intimate family photos of Jay Z and Blue Ivy, on her website. The 1990s-style glamour shots of the Queen in lingerie with her belly on display are accompanied by a poem titled “I Have Three Hearts” (a reference to the twins she’s carrying), which describes the joys of motherhood as well as her gratitude for her own mom, Tina Knowles-Lawson.

The Weeknd’s H&M Campaign Has Arrived [Instagram]
The Weeknd (a.k.a. Abel Tesfaye) has been the talk of the town recently. The crooner not only announced his Starboy tour (and all the merch that goes with it) as well as his role as a creative collaborator with Puma, but he also made headlines for his romantic Euro trips with Selena Gomez. And, on Thursday, the fruits of yet another gig as an ambassador and collaborator for H&M were unveiled on Instagram in a series of photos which sees the singer strutting the streets at sunset in the Spring Icons Selected by The Weeknd collection. The offering includes bombers, coats, denim and sweaters, and launches in stores on March 2.

Barneys New York Names New CEO [Business of Fashion]
Daniella Vitale, former chief operating officer of Barneys New York, has been named the new CEO of the luxury retailer. She succeeds her mentor Mark Lee, who was appointed CEO in 2010 and has now been named as the executive chairman reporting to Richard Perry, whose hedge fund owns a majority stake in the company. “It’s time for me to turn the day-to-day management over to Daniella who has long been my planned successor and is uniquely qualified to take the leadership reins,” Lee said in a statement. “I will continue to support Richard Perry at the board level as I pursue other part time opportunities and passions in what I am characterizing as my retirement from full-time luxury industry work.”

Children of ‘90s Models Star in 2017 Spring Campaign [Pret-a-Reporter Inbox]
As if you hadn’t noticed, the fashion industry has a thing for the children of celebrities. Nowhere is that more clear than in The Gap’s “Generation Gap” campaign, which stars six children of 1990s stars wearing basics from the Archive Reissue collection. Lizzy Jagger (daughter of Jerry Hall and Mick Jagger), Evan Ross (son of Diana Ross), Coco Gordon (daughter of Kim Gordon), Chelsea Tyler (daughter of Steven Tyler), TJ Mizell (son of Jam Master Jay of Run D.M.C.) and Rumer Willis (daughter of Demi Moore and Bruce Willis) were photographed and interviewed for the project. The kids are also joined by Naomi Campbell in the campaign.

Hamilton Star Designs Lou & Grey Collection [Pret-a-Reporter Inbox]
Original Hamilton castmember Jasmine Cephas Jones has designed a collection for lifestyle brand Lou & Grey, a label under the Ann Taylor umbrella. The limited-edition collection of super-soft vintage tees and sweatshirts draw upon Jones’ background as a Brooklyn native, according to a release, and feature phrases such as “Groovy Baby” and “Brooklyn Original.” The collection, which retails for $45 to $250 and also includes 14K gold necklaces by Brooklyn-based designer Winden, is now available on LouandGrey.com and at the Lou & Grey store in the Flatiron District in Manhattan.

Lady Gaga Previews Super Bowl Halftime Fashion at Press Conference [Pret-a-Reporter Inbox]
Lady Gaga, who will not only perform at the Super Bowl halftime show on Sunday but will also make an appearance in Tiffany & Co’s first Super Bowl ad, stepped out Thursday at the halftime press conference wearing a head-to-toe Versace look from the spring 2017 collection. The look, which mirrored sponsor Pepsi’s red, white and navy logo, was worn by Naomi Campbell in Milan last September to close the show. The ensemble is just a taste of what we’re sure will be a fashion-filled performance on game day. 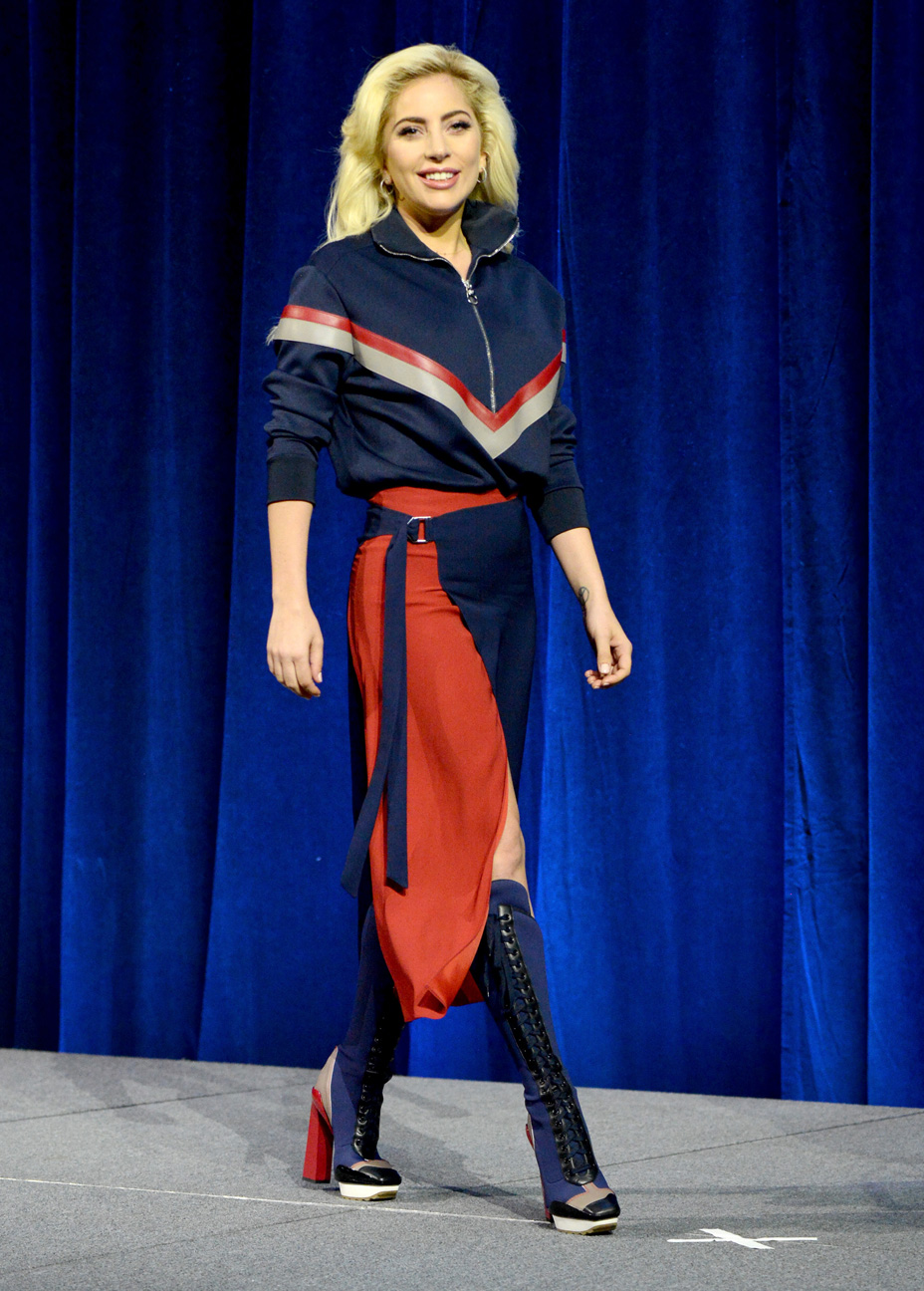