George Clooney ran the show as director for his latest project, Suburbicon, and he also stole the show at the film’s premiere in Los Angeles.

“He’s incredibly thoughtful, he’s very, very prepared and he really knows what he wants to say with his movies. He knows how to communicate his vision with those who are working for him, which is exactly what you want as a director,” Julianne Moore told The Hollywood Reporter Sunday night as she reunited with Clooney, Matt Damon, Karimah Westbrook, Grant Heslov and more.

Adding, “I would absolutely want to work with him again.”

Westbrook shared that sentiment, saying, “He’s fun, good energy, it was great to go to work every day because it felt so light. George is an actor’s director. He knows how to effectively communicate.”

As for his friend Damon, the actor told reporters, “I always have to do whatever he says no matter what, but normally I don’t mind because he’s got good taste.” 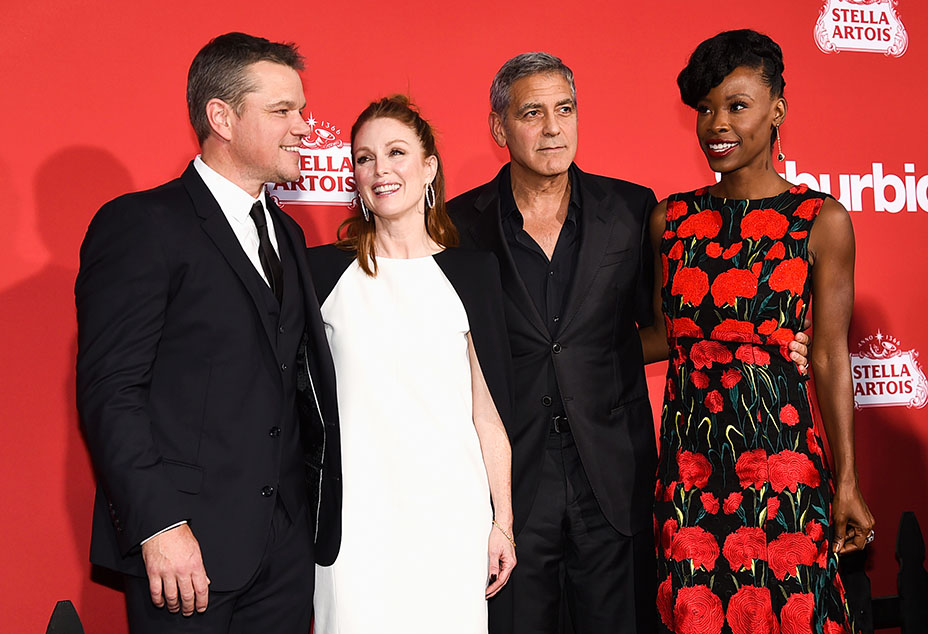 The film is inspired by the true story of the Myers, an African-American family who faced severe racism and discrimination when they moved into the predominantly white suburbs of Levittown, Pennsylvania, in 1957.

Says Clooney’s longtime producing partner Heslov of adapting this story to the screen, “This was the North and this kind of stuff was happening all over the place. It’s good to raise this discussion. The family is actually here. The one daughter and one son of the Myers are here tonight.”

Heslov co-wrote the film’s script with Clooney as a rewrite of Joel and Ethan Coen’s screenplay and joked that they were able to get a stamp of approval on the final project.

The writer told THR about the reaction the Coen Brothers had to the film: “You just hope that they don’t hate it.” He added with a laugh, “They loved it. We talked to them on the phone and said they were really glad we kept in one particular scene, a very funny scene. They were happy we kept that in.”

The film’s premiere was followed by a private reception with Paramount’s Jim Gianopulos, Amal Clooney and her mother Baria Alamuddin, and Luciana Barroso.

At Home With George Clooney in Italy: Amal, the Twins, Politics and an Incendiary New Movie