Few people know the real-life story behind the upcoming George Clooney-helmed film Suburbicon better than Lynda Myers. After all, it was her parents, William (played by Leith M. Burke in the film) and Daisy (Karimah Westbrook), who moved into the home at 43 Deepgreen Lane in Levittown, Pennsylvania, in August 1957 — setting off a violent racial conflict that lasted months.

The parallels to the recent protests in Charlottesville, Virginia, are haunting. An idyllic community explodes in racial violence. A seemingly safe neighborhood is upended when whites start rioting against blacks. But that was the scene in Levittown — a long-forgotten upheaval that occurred almost exactly 60 years ago.

The Myers family, who were African-American, moved into a cookie-cutter suburb populated entirely by white people in the summer of 1957. It’s the true story that inspired Clooney’s Suburbicon, a drama starring Matt Damon and Julianne Moore that debuts Sept. 2 at the Venice Film Festival.

“Those in the North love to think they had nothing to do with [racism],” Clooney tells The Hollywood Reporter. “They love to wash their hands and say: ‘Actually, we were the liberals. We were against slavery and pro-civil rights.’ And the truth of the matter was much more complicated. There were a lot of problems, particularly in places like Levittown.”

The movie interweaves two tales — one involving the black family, the other a seemingly normal white family next door that turns out to have its own dark secret — and could not be better timed, coming soon after the Aug. 12 events of Charlottesville and the uproar following President Donald Trump’s apparent defense of the white supremacists who had demonstrated there.

“What’s been so demoralizing is that, I don’t think anyone thought George was prescient in what we were shooting; we all felt we were talking about things that had happened in the past,” says Moore. “But what’s happened recently has been absolutely shocking.” 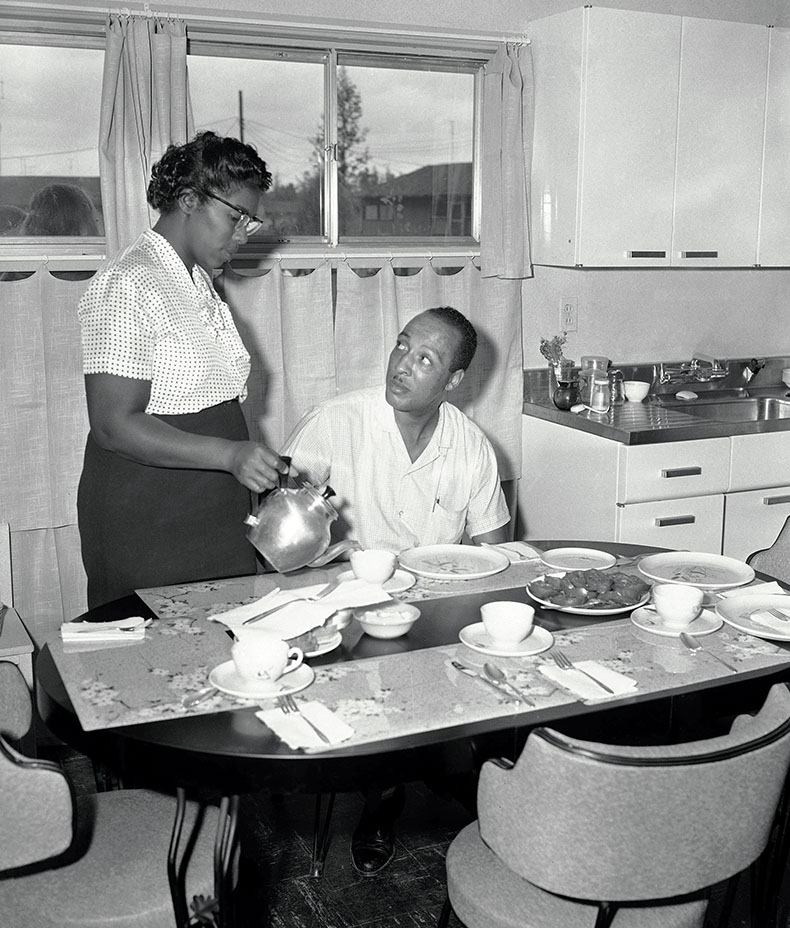 Levittown was a planned community of some 17,000 almost-identical homes, designed to be the perfect suburb for residents fleeing the expensive, crowded cities. That, at least, was the way it was conceived by William Levitt, who built several such housing projects across the country (the original, best-known Levittown was on Long Island). But he may also have had other things in mind when he envisioned this most homogeneous of environments: to create a haven where white people could live without the presence of minorities, especially African-Americans.

“The reality was, William Levitt was a bigot,” says Clooney. “And William Levitt wouldn’t let blacks move into his homes and was taken to court and ordered to integrate. And rather than integrate, he sold his property.”

The man Clooney describes has some apparent similarities to Trump. Like the president, Levitt was the son of an aggressively entrepreneurial father, writes David Kushner in Levittown: Two Families, One Tycoon, and the Fight for Civil Rights in America’s Legendary Suburb. The family consisted of “two dapper young brothers, William and Alfred, and their diminutive father, Abe. In contemporary terms, they had the kinetic chemistry and renegade brash of a Silicon Valley start-up. Abe, a self-made immigrant and passionate horticulturist, provided the springboard and the grass seed. Alfred, a self-taught architect (and sci-fi geek), designed the homes. And Bill, a Barnumesque promoter and marketing whiz, built the business and sold the dream.”

William Levitt was “a national icon and titan on the scale of Henry Ford and Walt Disney,” writes Kushner. “Time magazine put him on the cover and ordained Levittown ‘as much an achievement of its cultural moment as Venice or Jerusalem.’ ”

But Levitt’s “cultural moment” notably excluded blacks, until the Myers moved in on that August day, after another (Jewish) family sold them the home at 43 Deepgreen Lane.

“My father was an electrical engineer, and my mother was an educator,” says the Myers’ daughter, Lynda, who was a baby when the family moved to Levittown. “She was a guidance counselor, a teacher and then went on to be a principal, and they met at Hampton Institute,” when both were students. “They were both very intelligent and compassionate and always cared about people. They were very well-liked and respected.”

The Myers had no dreams of becoming leaders in the civil-rights movement — and no idea that Daisy would one day be called the Rosa Parks of the North. And yet that’s what happened when locals began to harass them. Within days of their moving in, an organized campaign began to force them out. Dozens of locals gathered outside the house all day and night, blaring music and banging loudly. Once, a rock was thrown through their window; at another time, an 8-foot cross was set on fire.

“[My mother] would relay some of the stories,” recalls Lynda, “about how the crowds gathered outside and how they were making a lot of noise and ruckus, saying nasty things, throwing cigarettes against the house, burning crosses in the yard.”

The demonstrations turned so ugly that the police were called in to break them up, and yet even that didn’t stop them. One of the neighbors who supported the Myers (and there were quite a few of them) got so angry that he drove his car into the crowd, stopping just short of ramming them — a strange reversal of the most terrible moment in Charlottesville, when a white supremacist drove his car into the crowd and killed a young woman, Heather Heyer, 32.

Despite the pressure, the Myers refused to give in, nor did they ever focus on their antagonists when they spoke about the experience afterward. “[My mother] talked about the help she got, to be honest,” says Lynda. “The help that she received, the people that she met.”

After two weeks of jeers, screams and stone-throwing, the opposition subsided, and the Myers remained in the house for four years, despite continued threats, including phone calls warning that William would be killed. They left Levittown when his work took him to Harrisburg, Pennsylvania.

The suburb only gradually became more integrated, held back in part because “Levitt excluded African-Americans for decades after the Supreme Court ruled it unconstitutional to do so,” writes Kushner.

Years later, Daisy (who died in 2011) returned to the scene of the conflict. “Levittown actually invited her to come back [in 1999] to offer her an official apology for the situation that happened,” says Lynda. “And they planted a tree in front of the City Hall and called it ‘Ms. Daisy’ and had a big banquet and everything. They made her feel very welcome, very welcome.”

But that welcome, her daughter says, belies the strife she now sees in the country. Until recently, she believed racism had diminished, if not disappeared — but not anymore.

“I thought that race relations had improved quite a bit until, unfortunately, President Trump became president,” she notes. “People felt they could now say out loud what they really felt and not hide it. Now they feel open and free to do what they want to do and hate the way they want to hate. It’s almost like there was a bandage on it, and now it’s been ripped off.”