If you’re not familiar with Rockstar’s Red Dead Redemption 2 — though, given that it moved more than $750 million worth of copies in its first weekend of release, you’re probably familiar-adjacent — it’s an open-world video game set in the waning days of the Old West. Story missions advance the main narrative, unfolding the life of Arthur Morgan, gunslinger and outlaw. But you can also just wander in the world.

I was doing that very thing, at night in the woods outside a town called Valentine. I saw a bunch of torches and steered my horse closer to investigate. There, in all its hooded glory, was a Ku Klux Klan meeting. A collection of knuckleheads, all trying to set a giant cross on fire. I’ve been told that if I leave them alone, one guy will screw up and burn them all alive. But I didn’t leave them alone. I shot and killed every one of them.

Now, the game has a built-in morality engine. If you just run around killing random people, witnesses will report those murders to the authorities, who will put a bounty on your head. But if you kill those Klansmen, there’s no witness to report you. Even though Arthur Morgan is a white guy and an outlaw, Red Dead Redemption plants a flag: Even bad guys know there are not “good people” on both sides.

I’ve been gaming for 40 years. I can count on two hands the number of times I’ve played with a protagonist who had my skin color — and that’s usually because I customized the skin tone from its default white.

That’s just the reality for gamers who aren’t white guys — the stories rarely acknowledge that they even exist. Oh, sure, every squad of future-military badasses has a black dude or a Latinx female to flank the hero as he fends off an alien invasion. Despite the fact that, according to Nielsen, 77 percent of African-Americans over 13 are likely to game compared with 66 percent of the general population, games don’t reflect their experience. Unless, of course, the sliver of that experience looks like Straight Outta Compton, an easily understandable cinematic model that white gamers — and the overwhelmingly white video game creators — can grasp. (Those creators are also overwhelmingly male, which results in very few female protagonists for the growing number of lady gamers to rally around, Lara Croft notwithstanding. And, given the Gamergate-related vitriol that gets spewed toward those women, the fact that more and more of them are playing shows just how much they love it.) 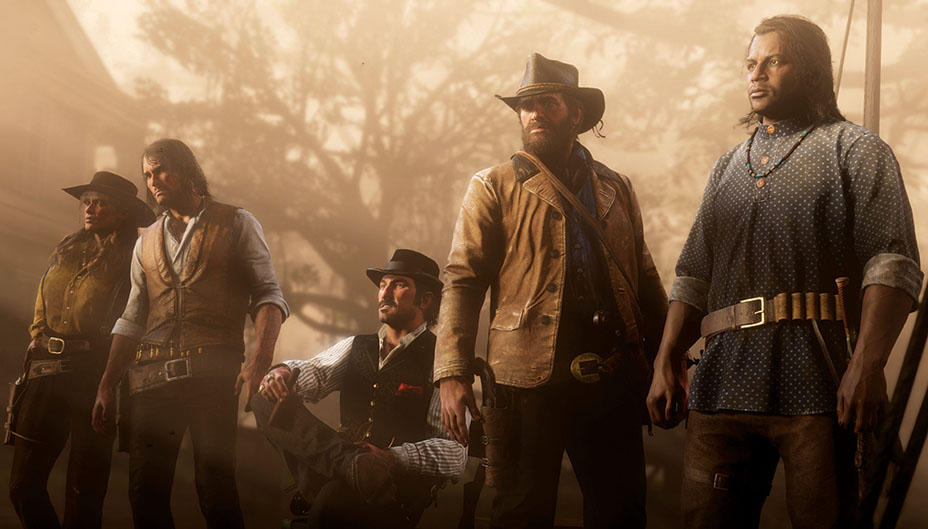 Unless it’s World War II, and it’s a first-person shooter in which you kill Nazis, most games are not concerned with history. So there’s little opportunity to examine those historical crossroads where race, class and violence intersect. While Red Dead Redemption 2 isn’t about that, per se, it willfully acknowledges it. You spend a fair amount of time in a gang of outlaws, which include ex-sharecroppers chased off their land and Mexican banditos looking for opportunity north of the border — and riding with them brings comments from other people in the world. Some wish the South had kept rising, others wonder why their fancy riverboat had to start hiring Mexicans: “Next thing you know, we’ll start employing Negroes.” Maybe some players won’t get the satire, maybe they will just see what they want to see. But for Red Dead to strut into our world, at this particular time, and offer this much subversive racial commentary really is something.

As refreshing as this element of RDR2 is, it’s nothing compared to Assassin’s Creed: Freedom Cry. Produced by Ubisoft, the Assassin’s Creed games are all about history. Each of them takes place in a different era: Renaissance Italy, the Crusades, Ancient Egypt. Some of them sidestep race, but others sink their teeth deep. Assassin’s Creed III follows a biracial protagonist, the son of an English nobleman and a Mohawk tribeswoman, and it deals candidly with racism in the American colonies on the eve of the Revolution.

Assassin’s Creed IV: Black Flag was a pirate adventure set in the 18th century Caribbean — right in the middle of the transatlantic slave trade. The main character’s right-hand man, Adewale, is a Trinidadian who escaped bondage. Adewale went on to get his own spinoff adventure called Freedom Cry, in which your mission is to board slave ships, kill the slavers and free the slaves. And liberate plantations. The game was, literally, kill whitey. And it was a game produced by a billion-dollar, international outfit. Can you imagine thinking that you can make money and be “woke” at the same time?

My father is from Haiti, my grandfather from Trinidad, and here is a game where characters speak Creole while liberating slaves. It was the first time I’d ever felt seen in a medium I loved. And, by gods, I’d never had quite so much fun — at least, until I got to go back and barbecue some Klansmen in RDR2.

MARC BERNARDIN is a television writer and columnist for The Hollywood Reporter.