Nicholas Braun has a certain comfort level with suits. As the shambling “cousin Greg” on HBO’s hit series Succession, the 31-year-old actor usually is attired onscreen in the standard corporate uniform, albeit of the off-the-rack, discount variety. “It’s kind of funny when I step out of my trailer to walk to set. I feel like I’m a complete 9-to-5er,” he says over breakfast in New York.

But this rising star — facing the increasing sartorial demands of promotional shoots and red carpet appearances — is becoming more knowledgeable about designer wares. Braun regularly works with Jason Rembert, a stylist turned designer whom the actor sought out. “I was looking for somebody who felt like my vibe is a lot like musicians, artists and athletes,” says Braun, a vocalist who intends to record during hiatus (he describes his music as “kind of James Blake-Daniel Caesar-electric-R&B.”) “I love hip-hop and [Rembert] has done a lot of hip-hop artists, so I thought this feels like the right zone,” he explains.

Since working with a red carpet stylist, Braun has evolved his offscreen style to feature suits by Dior and Thom Browne. LeBron James, another one of Rembert’s clients, not only shares with Braun an affinity for the latter designer — famous for his shrunken cuts — but also stands at about the same height. At 6 feet, 7 inches, the actor measures only an inch shorter than the Laker. Braun is taller than Armie Hammer and Vince Vaughn (both 6 foot 5) and shorter than perhaps only one other high-profile actor in Hollywood, Brad Garrett (6 foot 8). 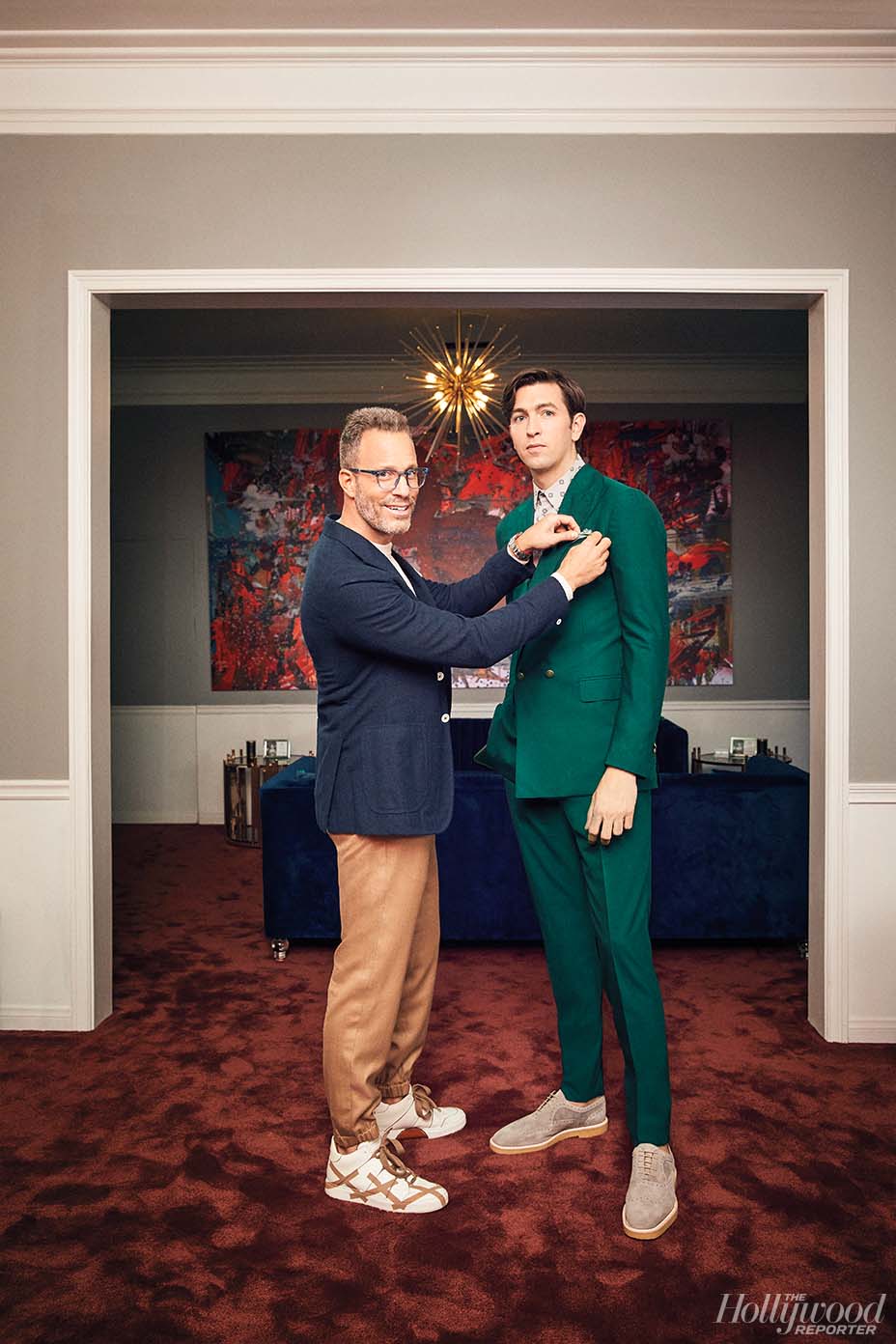 Finding clothes that fit is a continual challenge, according to Braun. “I’m still trying to find brands that have a long enough inseam,” he says. “I remember one John Varvatos tux where I was like, ‘These pants fit me right now.’ ” Besides the issue of trouser lengths, they often lack enough expanse for them to sit properly on the waist. “Then the jackets are coming up short and there’s not even enough room in the cuff to let out,” he says. “So, it’s always a bit of a tailoring job to get them to work.”

With Succession nominated for best drama series, Braun will be formally suited and booted for the Emmys (at press time, he and Rembert had not yet decided on a tuxedo), but the weekend of events and parties leading up to television’s biggest night still presents a style challenge. THR‘s contributing men’s fashion editor, Andrew Weitz of The Weitz Effect, who dresses many top Hollywood players, was on hand to offer Braun some relevant counsel. Weitz, a former WME agent, started by considering choices for one of the more formal events Braun will be attending: The Evening Before, a Saturday night fete that raises funds for the Motion Picture & Television Fund. “When I had a consultation with Nick, he told me he wears a lot of blues. I wanted to do something a little different,” Weitz says. “I asked him if he was open to a forest or emerald green, and I could tell he kind of lit up.”

Because of the actor’s height, Weitz commissioned a custom bottle-green, tropical-weight merino wool and mohair suit from New York suit maker J. Mueser Bespoke. (Mueser outfits many top agents and industry figures and makes quarterly trips to Los Angeles to attend to them.) Braun had contemplated going bespoke earlier, during the filming of the first season of Succession in the U.K. “Kieran [Culkin] and I were talking and he said, ‘I’m going to get a suit made on Savile Row,’ ” recalls Braun. “We went there, and it [cost] 2,000 pounds and I was like, all right, next season.” 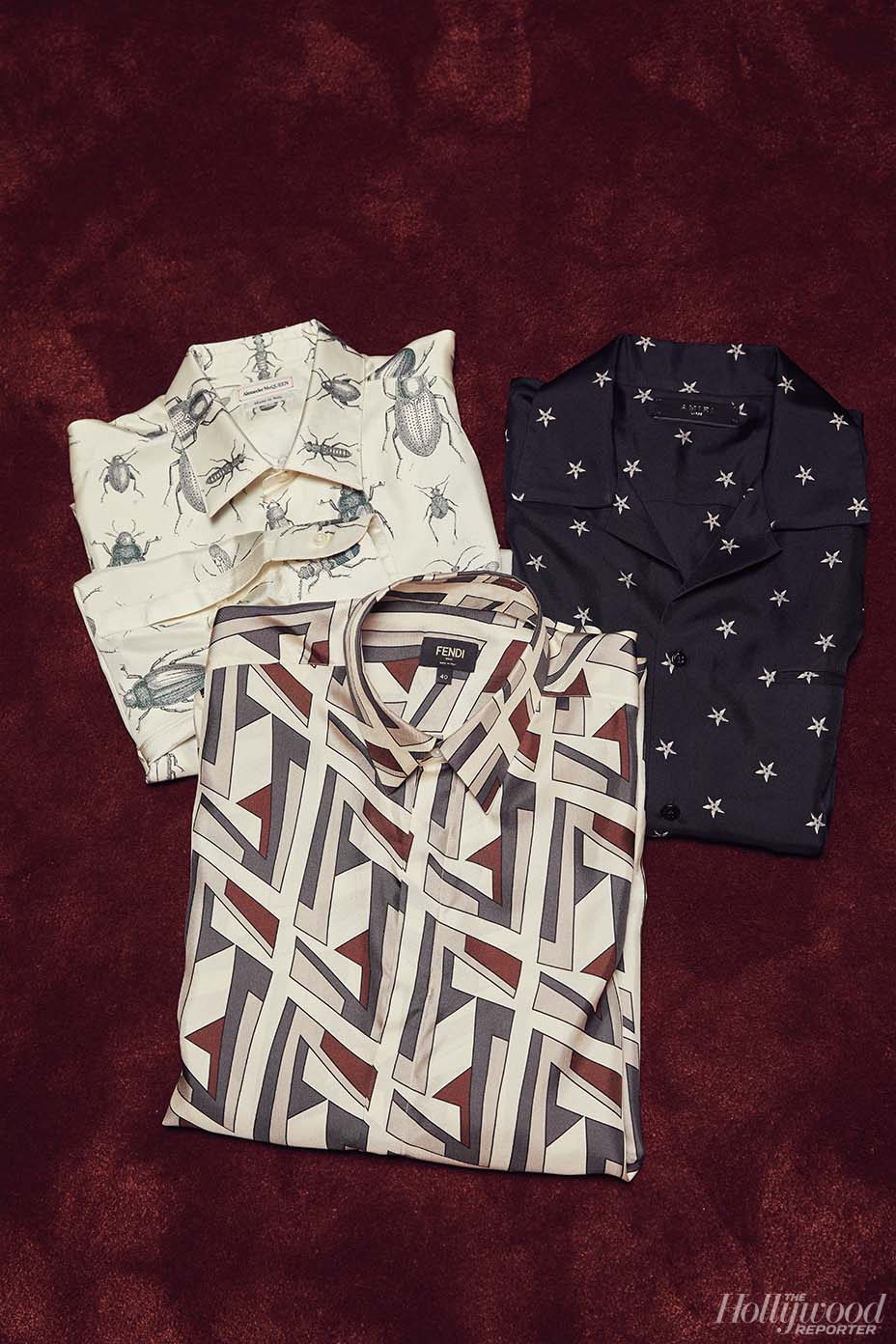 Made in Italy, the suit features a two-buttoned, soft-shoulder jacket, for a more relaxed air. Weitz accompanied the suit with a geometric-patterned silk shirt from Giorgio Armani. Not as garish as during its ’70s heyday, the silky shirt is enjoying a bit of a comeback, with designers mining a louche vibe reminiscent of Quentin Tarantino’s Once Upon a Time in Hollywood.

A pair of Christian Louboutin lace-ups, in a grayish tone that refers back to the shirt, won the day. Braun approved of the finishing touch — a pocket square — and the still trendy bare-ankled look (accomplished with no-show socks). “It’s kind of a serious gentleman suit, but the color is more fun and adventurous,” Braun says. “It’s like a little bit from a different era, but not stiff: You can sit in it and not feel like it’s pulling or tugging. I can’t believe I get to have something like that in my wardrobe.” 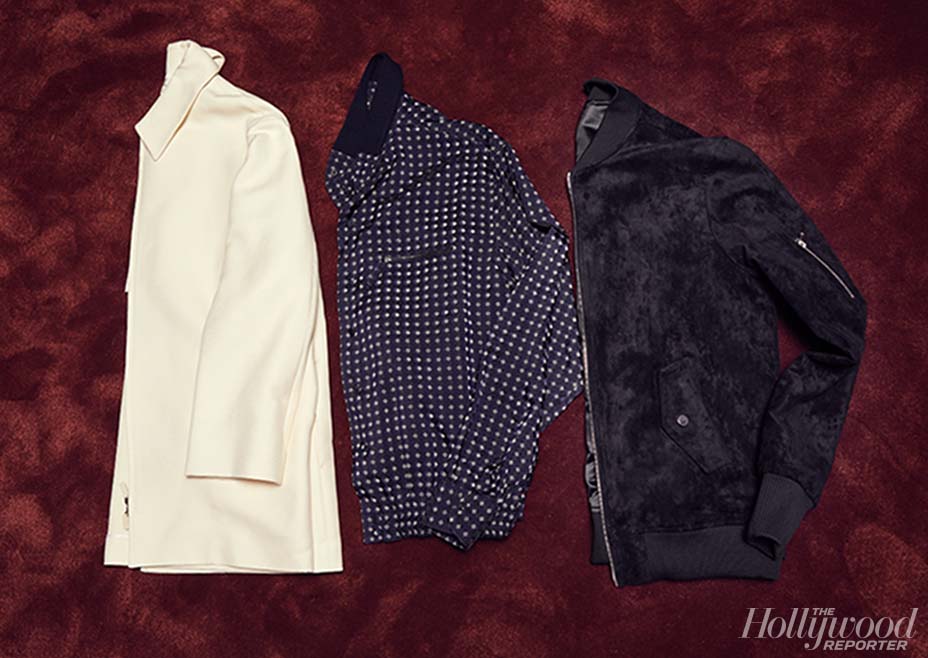 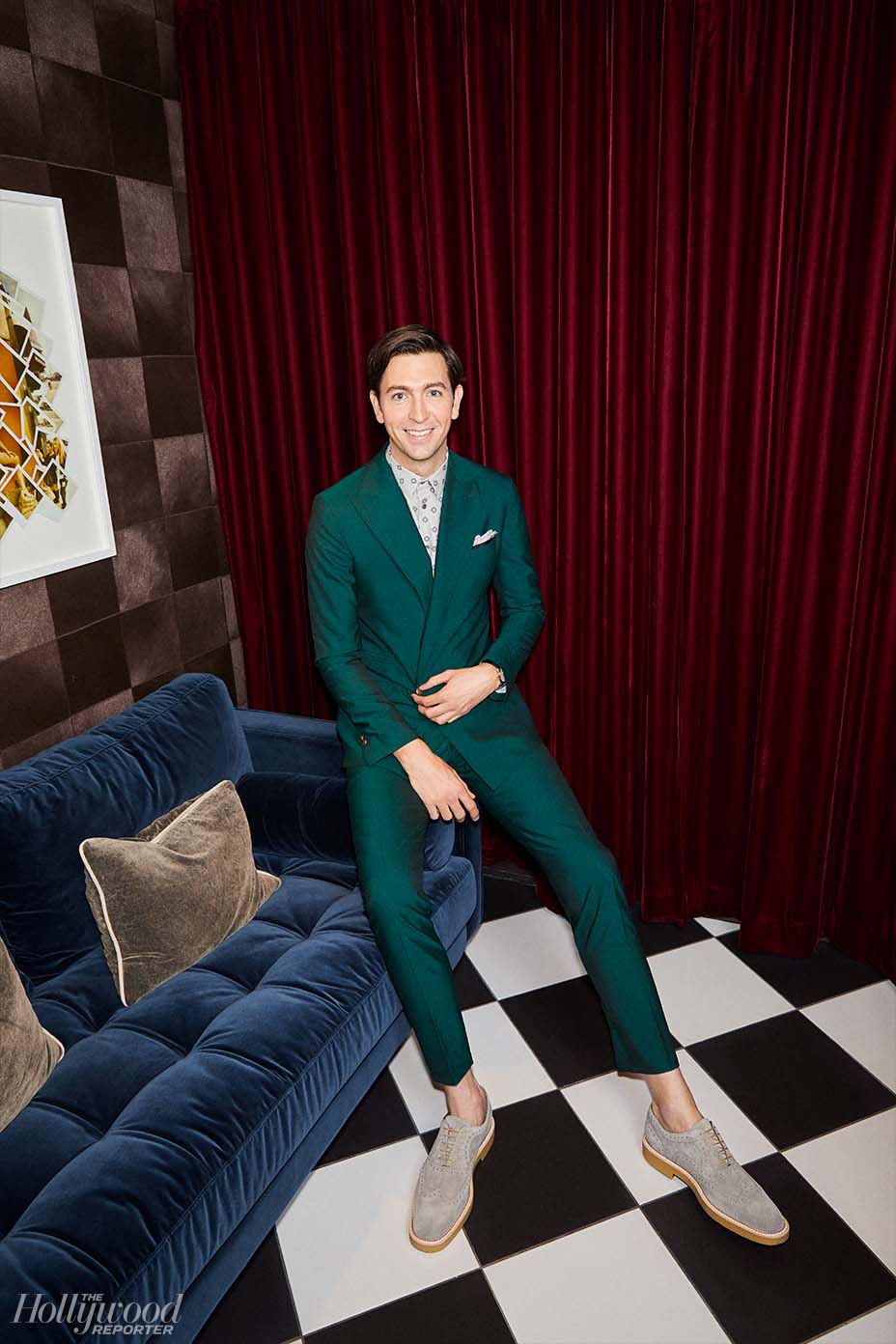 For a second look to wear to more informal parties on Friday night, Weitz says he wanted to play on Braun’s naturally preppy style, mixed with an edgier take, for a star-making impression. “I said, ‘Listen, you’re on a show that people are watching, is critically acclaimed and Hollywood loves it, so when you walk into a room, I want to make sure you show up, not Cousin Greg,’ ” says Weitz.

The key component to an indelible statement came in the form of a rich camel leather blazer from Ferragamo that complements the actor’s skin tone. “This blazer, which was shown on the runway, has so many details — and the length is perfect,” says Weitz. 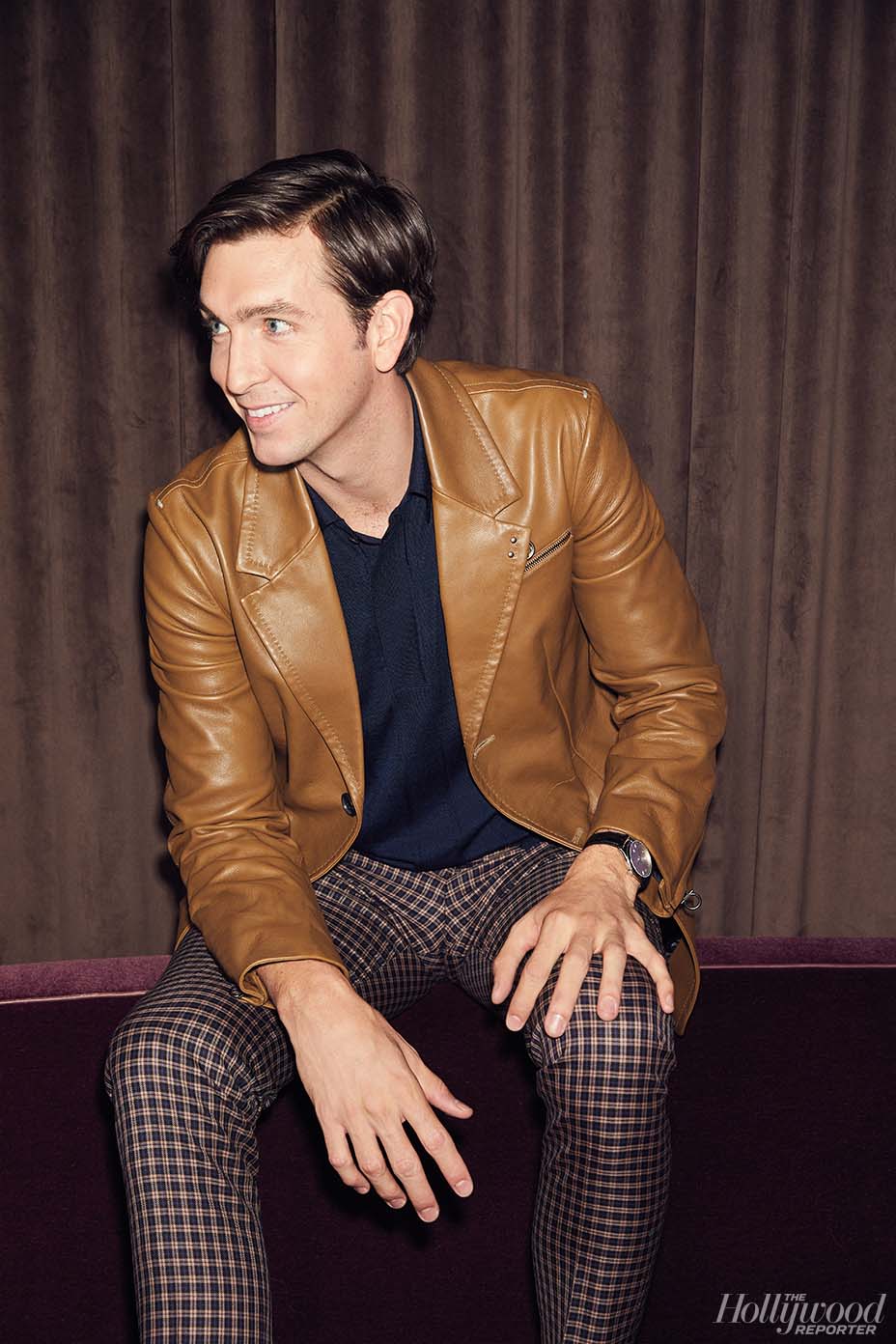 The style consultant added a checkered trouser from Paul Smith that picks up the olive undertones in the jacket and pulled in a dark navy knit polo from Dunhill. The final touch was burgundy leather lace-ups, also from Ferragamo. Says Braun of the ’70s-flavored blazer, “When I first saw it on the rack, I thought, ‘I don’t think I can pull that off, this can’t be me.’ ” Combining the jacket with the more familiar knit polo convinced him. “I was like, ‘Oh shit, I think I can actually rock this.’ I’m excited for the weekend,” he says, adding, “I do like to dance at parties, so I’ll have to find someplace to hide my nice jacket while I’m on the floor.” 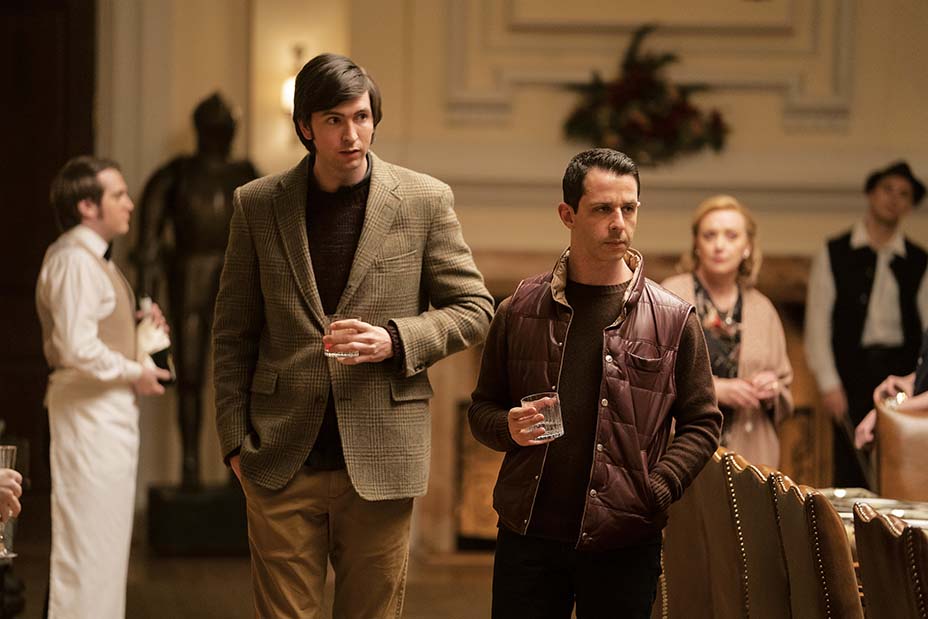 Big and Tall? How to Handle Awards Season With Stellar Style

Of her taller clients, such as Jason Momoa, who stands 6 feet, 5 inches, A-list stylist Jeanne Yang says, “For the Emmys, the first thing I do is have a shirt custom-made, since these guys don’t have the proportions of mere mortals.” Clients with a 42- or 44-inch chest tend to have a 38-inch waist, “not a 34 like these stars whom you don’t want to put in a big baggy shirt,” adds the stylist, who also dresses Robert Downey Jr. and Keanu Reeves. If custom isn’t an option, Yang advises already-made tux shirts from Hugo Boss, which still offers sleeve lengths in longer sizes at stores like Nordstrom that have Big & Tall sections. “It’s so much better than having to add 2 or 3 inches of fabric at the elbow, then telling my guy not to take his jacket off all night because he’ll look like an old-time bartender,” Yang says with a laugh. New York’s J. Mueser offers a line of ready-made shirts ($225) with extra-long sleeves, to be altered to the length needed.

When it comes to a tuxedo, red carpet men’s stylist Michael Fisher, who works with Alexander Skarsgard (6 foot 4), will size up — say, from a 42-long to a 44-long — then have the suit altered to fit. European or slim fits tend to “have that length in the body, too,” he says. Even with 6-foot-4-inch clients like Adam Driver and Hugh Jackman, Fisher can make a ready-made tux work with alterations. But if a guy has basketball-player proportions, off-the-rack will look too shrunken. Says THR‘s Andrew Weitz of his client Stephen Merchant, the British actor-producer who is 6 foot 7: “After trying to dress him off the rack, I told him we needed to go custom.” Top U.K. tailor Nigel Curtiss now makes his tuxes.

Fisher, who says he sticks to black and dark navy to minimize taller proportions, cites Suitsupply’s Custom Made program as an example of affordable bespoke (tuxes start at $699). Just avoid one trend in particular, says Yang: “I tend to steer away from the new shorter hem length, because most of these guys have had to wear pants that were too short their whole lives.”