Continue to The Hollywood Reporter SKIP AD
You will be redirected back to your article in seconds
Skip to main content
June 13, 2019 10:10am

Succession offered a tough premise for TV viewers when it premiered last summer. The HBO satire-drama follows the Roy family, a backstabbing, scheming, Murdochian clan that owns a major conservative media conglomerate. When the patriarch and CEO of the company suffers a health scare, both immediate and extended family — no matter how well-heeled — begin grubbing for pieces of the company pie. With media conglomerates and dynastic families creating enough drama in real life, did consumers really want that in their fiction as well?

The answer, it turned out, was yes: The show became a sleeper hit (it was renewed after just two episodes had aired). Fans paid homage to the show by turning Nicholas Braun’s clumsy “Cousin Greg” into an internet meme and subject of several laudatory think pieces calling him the show’s “secret weapon” and “only non-sociopath.”

Not that showrunner Jesse Armstrong, 48, paid much attention. The prolific British satirist , who created the BAFTA-winning cult hit Peep Show and has written on Black Mirror, Veep, The Thick of It and Fresh Meat, tries not to read reviews or commentary on Twitter — even though he says major business figures’ use (or misuse) of the platform inspired the second season. He also says he doesn’t know if the Murdochs or the Redstones have seen the show (he hasn’t heard from them either). A few months before its return in August, the showrunner spoke with The Hollywood Reporter about the real-life inspirations for the series’ Machiavellian turns, Kieran Culkin’s on-set antics and Armstrong’s own favorite real-world business dramas of the past year.

When Succession premiered last summer, its themes were conspicuously suited to the moment. How did the media landscape at the time influence the show’s creation?

It happened slow and then fast in that I’d done a show [Peep Show] for a long time with my writing partner Sam Bain, and when that came to an end at the beginning of 2016, end of 2015, I thought about pitching this show to HBO. As for the themes [being resonant], it’s lucky. I’ve had a bit of experience with cultural shows like The Thick of It in the U.K. and Veep in the U.S., and I think you write about these political, cultural, social moments that carry on in interesting ways. You think, “Oh my God, I need to get my show out now because this media merger is happening, or that particular figure is so prominent,” but the truth is that these things are somewhat perennial. It changes, but the question of media ownership and media control and its effect on the culture and politics of their time will carry on being significant.

You’ve mentioned before that some plotlines have been inspired by the current cultural and political landscape. What’s one example of how a real-world event made it onto the show?

Our research is voluminous, and we have lot of people who we talk to, but then it goes through that weird mashing-up machine, which is the writers room. So a writer describing their family dinner collides with something from Conrad Black collides with something from DisneyWar, that book about Michael Eisner and the Disney regime with Jeffrey Katzenberg. We tend not to do ripped-from-the-headlines so much as a papier-maché of different bits from the newspapers, from writers’ personal experiences, from the Financial Times or Wall Street Journal that morning.

While remaining funny, the show takes on the serious issue of media conglomerates shaping global business politics. Did you and the writers ever struggle to craft jokes from that reality?

No. I mean, there’s a lot of comedy writers in the room, and even the writers that aren’t, they’ve all got comic facility. That’s something I look for in the cast and in casting the writers room, as you might say: It’s people who enjoy seeing those dualities to life, the ways in which reality is terrifying but also funny.

The show is remarkably focused on details, from the New York magazine cover to the expensive sneakers Kendall Roy (Jeremy Strong) wears to meet with a startup. How did you capture the nuances of the New York media elite’s rituals?

We read a lot. We have consultants that we check out stuff with. And we’re all writers, and that’s writers’ meat and drink, is trying to be really good noticers of stuff. Actually, I think getting the precise right set of trainers is [thanks to] Jeremy Strong. He had a really good, strong interest in those details as well. So the writers are part of it, there’s the departments on the show that help you to get things right and we have a super-engaged cast. Details are what makes a really good texture for a show, don’t they? All the shows I really love feel like that — Six Feet Under really knew the world of [funeral homes], the dark way and the texture and everyday detail of that world.

You’ve said that you incorporate improvisation into the production. What was one time when an actor improvised a part that not only made it to the final cut, but improved the show?

Kieran Culkin sometimes says really quite outrageous things. His bit where he said, “These hands aren’t going to fuck themselves,” made it into the cut. In a way, that’s the icing on the cake, getting an extra line like that. The texture of having people feel free with their words paid off in every scene. What’s so great is that we do quite a lot of dinner parties and a number of big social events — letting people just talk to each other in those gives you the most background hum of reality. 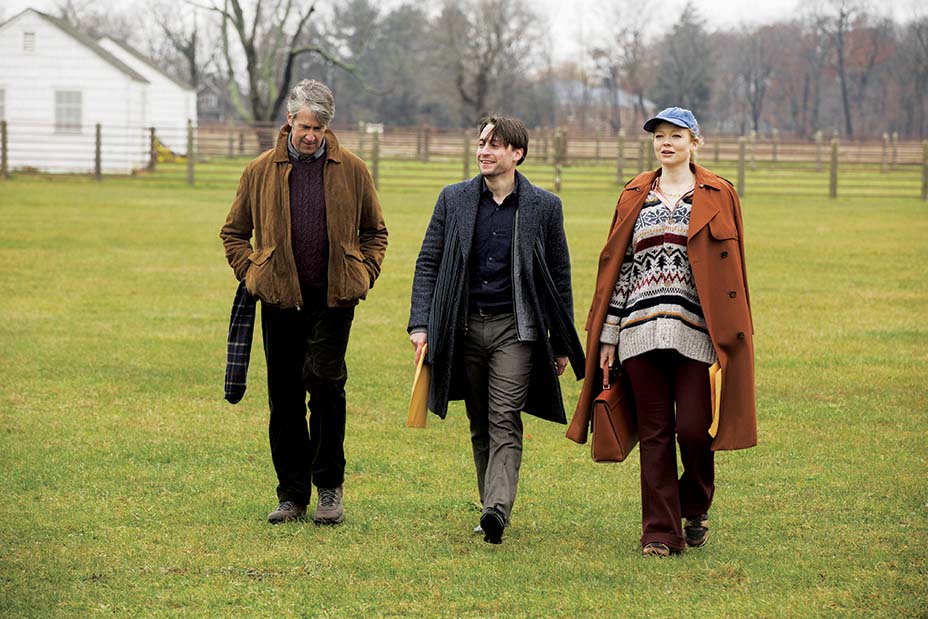 Since Succession premiered in 2018, there have been some major moments for the media business, from the Disney-Fox merger to Comcast acquiring a majority stake in Sky. Did those events help shape season two?

Yeah. We read everything that’s going on in the media landscape. We already had that merger, takeover stuff cooking, so those ones were more grist-to-the-mill. The bigger story, which informed the emotional temperature, [was] the feeling of tech being at the heels of all those media companies, which is part of the reason, obviously, that you’re seeing a [spate] of conglomerations. So that kind of [feeling of], like, “OK, we are these massive cultural edifices, but there’s something bigger in the culture that could swallow us all,” is a framing you might find in the show in the second season.

What has been your favorite delicious or dramatic real-life business scandal in the past year?

I find the direct interface that some businesspeople have with Twitter and making claims about going private and affecting their share price and that rebounding around — I’m thinking especially about Tesla — it just informs [us]. Cutting out the middleman in that way, which Trump’s doing in politics and some businesspeople are doing, is pretty intriguing.