There’s a blink-and-you-miss-it visual joke in Summer: The Donna Summer Musical, dropped in while the title character is belting “No More Tears (Enough Is Enough),” the disco anthem in which two take-charge women with killer pipes and a funky bass line vow to kick out the deadbeat men dragging them down. As often happens in this show with a protagonist in triplicate, the song is performed as a double-Donna duet. But Summer’s original partner on the 1979 hit does make a cameo appearance. When a hard-to-shake lover who has followed her from Munich to the Hollywood Hills shows up and starts smacking her around, Donna lays him out by socking him in the jaw with a Barbra Streisand coffee-table book. Finally, the perfect use for those hefty vanity tomes!

Sadly, that’s one of the few decent jokes in this tacky little show, a feebly dramatized Wikipedia page with lackluster covers, which was rushed to Broadway following a fall tryout at La Jolla Playhouse that received mostly tepid reviews. And yet it shows no sign of improvements having been attempted. Heaven knows it’s not the way it should be.

Why is there a wink-wink moment in a domestic violence scene? Well, at least it’s consistent with a musical that sprinkles groan-inducing laugh lines like a Borscht Belt comedian, regardless of the dramatic context. How to follow childhood sexual abuse, born again Christian enlightenment, a terminal cancer diagnosis and a half-assed acknowledgment of the devastating losses of AIDS? Duh, with a tasteless insinuation that Donna spent much time on her knees for purposes other than praying, of course.

The Boston church choir singer who went on to rule the dance floors of the disco era provided the soundtrack to my teen slut years, so I was primed to get on board for a Donna Summer jukebox bio-musical. But this dramaturgically inept show either short-changes or outright massacres Summer’s music; undervalues her achievements as a game-changing, influential artist and talented songwriter; completely fails to contextualize her legacy; glosses over her massive gay fan base; and rams its female-empowerment message down your throat the way geese are force-fed on the foie gras production line. Honestly, the only thing more depressing than the pandering feminist platitudes are the whoops of “You go, girl!” approval from the audience. 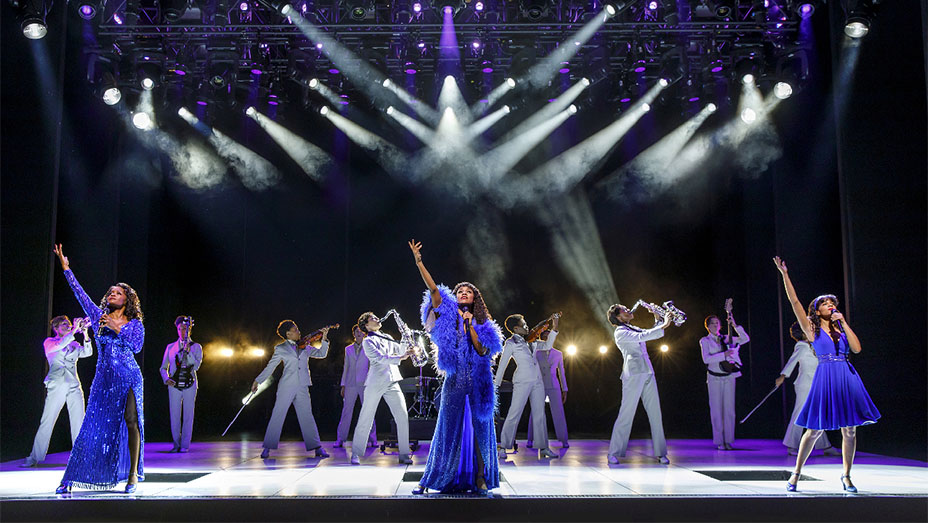 Three people admit to writing the musical’s rudimentary book: Colman Domingo, Robert Cary and director Des McAnuff, who brought respectability to the jukebox musical with his monster hit Jersey Boys. There’s no reason to believe their involvement wasn’t motivated by sincere admiration for the subject and her music; McAnuff reportedly had been in conversation with Summer about directing Ordinary Girl, a bio-musical she was developing in her final years, based on her memoir. But the shallowness with which the creative team treats her story is staggering, stringing together dialogue so trite — “Daddy was strict. Loving, but strict,” “Turned out free love wasn’t so free” — that it trivializes her personal and professional lives with equal efficiency.

Then there’s the music. Most of the major hits are represented, at least in fragments, but there’s a cluster of head-scratching choices, starting with the opener. “The Queen Is Back” comes from 2008’s Crayons, Summer’s final studio album, which was so overproduced and pop-generic it barely sounded like her anymore. A song probably familiar to a tiny fraction of the audience is not the way to start, especially when it’s staged with ensemble members standing around as musicians, fake-playing their instruments like those model “guitarists” in Robert Palmer’s “Addicted to Love” video.

Diva Donna (LaChanze) ascends out of the stage floor to take charge of the vocal before breaking into direct-address patter: “A modest opening, don’t you think?” Well, yes. “We just threw that together.” Clearly. Diva Donna is the most regal of the show’s three incarnations, flanked by lesser mortals Disco Donna (Ariana DeBose) and Duckling Donna (Storm Lever). The disparity extends to the performers. LaChanze, a 2006 Tony winner for The Color Purple, brings class and comes closest to capturing Summer’s considerable vocal range and power. DeBose, a graduate of the Hamilton chorus, and newcomer Lever, whose name sounds like Weather Channel jargon, are fine but make less of an impression.

In case you’re thinking the three-way character split fuels one woman’s poignant reflections on her life at different ages, as in the excellent Fun Home, forget it. The troika here just serves to share the burden of hauling a clichéd narrative that flattens every human experience into a clumsy song cue. Encouraging us to sing along, or get up and dance if the music takes us, Diva Donna explains that this will be “the concert of a lifetime,” possibly the laziest framing device anyone could come up with.

The mangling, early on, of two of Summer’s most iconic hits sends a clear signal this is going to be painful. “I Feel Love” and “Love to Love You Baby” are classics that changed the direction of dance music with their dreamy sensuality and trance-like grooves. Chopping them up with commentary, not to mention anemic arrangements, deflates the mood. As impractical as it is in a stage musical, disco songs almost invariably ended with a fade, or a continuous mix into the next track, like Summer’s party-ready 1979 hits collection, On the Radio. Capping them off with a Broadway button has a deadening effect. Not until eight numbers in with “MacArthur Park” is a song given room to breathe and build, though at the first press performance one of the Donnas came in way off-key, marring a moment intended to blow the roof off.

Brief dialogue about the foundation of bass and synth lines in “I Feel Love” suggests there’s going to be some exploration of the layered construction of these dance epics, but that’s over as soon as it begins. Making this even more like a Saturday Night Live parody of a jukebox musical, record producers Giorgio Moroder and Pete Bellotte are reduced to caricatures with bad accents, played by female ensemble members. And if there were dramatic texture to be mined from the experiences of a young African-American woman breaking into the recording industry in ultra-white 1970s Germany, the writers missed it. 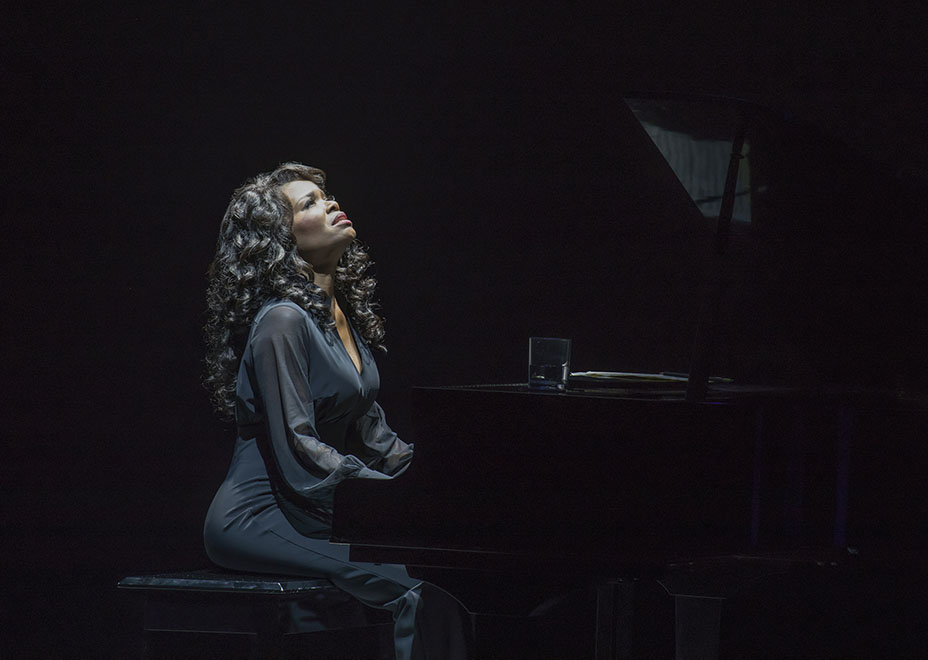 In an idea more interesting in theory than practice, the majority-female cast serves a twofold purpose: One is to convey “a world of mystery and androgyny, blurring all the lines” (the show’s coy way of acknowledging LGBT fans); the other is to push the empowerment angle delivered with predictably blunt force in “She Works Hard for the Money.” (All but one of the seven musicians in the thin-sounding band also are women.) If only the writers had managed to instill that empowerment theme in their protagonist. But even when she’s standing up to record company brass, the Donna Summer depicted here is a curiously passive character. A glimpse of her scribbling notes while hookers sashay along Hollywood Boulevard singing “Bad Girls” is pretty much the extent to which her songwriting contributions are acknowledged.

One of Summer’s solo compositions, “Dim All the Lights,” yields an affecting moment when sung by Disco Donna at a memorial service for Casablanca Records founder Neil Bogart (Aaron Krohn), despite the label’s shabby treatment of her. But that also marks the end of the hits, giving way to a dull stretch of third-tier songs that do nothing to make Summer’s final two decades compelling. (Really? “Stamp Your Feet” as a response to cancer?) And while LaChanze sings it with feeling, “Friends Unknown” is shoehorned in as an insulting attempt to address the controversial remarks that alienated gay audiences, which would only dig Summer in deeper, were she still alive.

As awkward as the segue is, it’s a relief when the closing scenes pick up the pace with “Hot Stuff” and the natural finale choice, “Last Dance,” showering the house in silver confetti. But even that jolt of bliss is truncated, squandering the opportunity to send audiences out on a high.

The opening image of a stereo turntable with a Casablanca record spinning is a cool start, but the video-heavy design on moving panels generally looks cheap and overly literal, while Howell Binkley’s throbbing lights are strictly routine. The hack-job direction is matched by Sergio Trujillo’s bland choreography, which goes light on disco formation dancing in favor of familiar moves, recycling bits from a better bio-musical, the Gloria Estefan show On Your Feet! McAnuff so overuses the jill-in-the-box effect of having Donnas popping up out of the stage, I kept worrying that a malfunction was going to get someone concussed on a disco ball. At other times, I surrendered to Summer’s religious fervor and prayed: “Please God, let The Cher Show erase this memory. And let me die before a JLo musical happens.” Enough is enough.