The creation of harmony out of disharmony and coherence out of chaos are among the themes of Sunday in the Park With George. However, in fortifying for Broadway what was already a probing interpretation of this complex 1984 musical diptych by Stephen Sondheim and James Lapine, first seen in a New York City Center concert staging last fall, the production has elevated an affecting work into something quite rare and exquisite. Jake Gyllenhaal and Annaleigh Ashford bring richer shadings and startling emotional candor to their dual roles, supported by a gifted ensemble that embodies the notion of great art being born out of multiple influences nourishing a unique vision.

Industry insiders grumbled after it was announced earlier this month that producers had withdrawn the revival from Tony Awards consideration, presumably to avoid having to cough up 1,600 comps for voters and their guests in a limited engagement of just 10 weeks. Given that tight profitability window, the decision makes commercial sense. Critical praise no doubt will help make the transfer a sellout, and the absence of their names at awards time will do nothing to remove Gyllenhaal, Ashford and the production itself from assessments of the season’s high points.

Staged with grace and fluidity by Sarna Lapine, the niece of the show’s book writer and original director, the production fits like a glove in the newly refurbished Hudson Theatre, operating as an official Broadway venue for the first time in almost 50 years. While not exactly scaled up — the cast still numbers 20, with 13 musicians in the onstage orchestra conducted by music director Chris Fenwick — the show now breathes more amply, no doubt the result of a fuller rehearsal period.

There are significant physical enhancements, however. Those include Tal Yarden’s captivating video projections of ever-evolving sketches, splashed over a loosely hung scrim in front of the musicians; Clint Ramos’ characterful costumes, in vibrant hues right out of the painting around which much of the action revolves; and Ken Billington’s expressive lighting, notably the dazzling pyrotechnics of “Chromolume #7,” the symphony of color and light that washes over the audience, unveiled by Gyllenhaal as the second of the two artists named George that he plays.

In the first act, he’s a fictionalized version of post-Impressionist painter Georges Seurat, an outsider in the clubby Paris art scene of the 1880s who never would sell a canvas in his short lifetime. In the second act, set a century later at the Art Institute of Chicago before returning to Paris, he’s the Frenchman’s great-grandson, a kinetic sculptor navigating the tricky politics of an art world in which schmoozing for funding and exposure has become an even more essential part of the creative process.

I’ve seen this double role played by Mandy Patinkin in the original production and by Daniel Evans in the very fine London revival that traveled to Broadway in 2008. But I don’t recall ever experiencing the binding unity of creative vigor and purpose with such piercing solitude that Gyllenhaal brings to the two parts. His Georges are single-minded obsessives, consumed by their art to a degree that renders them incapable of lasting human connections. And yet, the yearning for such a connection gnaws away at them throughout.

Without downplaying the egomaniacal drive that defines both artists, Gyllenhaal conveys Seurat’s pain at being unable to be the man that Dot (Ashford), his muse and lover, needs. Their mutual admission, “We Do Not Belong Together,” is heartbreaking. There’s sorrow also in his scenes with his thorny mother (Penny Fuller), particularly in the aptly titled “Beautiful,” in which he sees possibility in change where she can see only regret. In the second act, when the modern-day George’s grandmother Marie (also played by Ashford), the child of Seurat and Dot, urges him to connect, her directness pries him open in ways that continue to resonate back in Paris. He is reconciled there, across the generations, with the spirit of Dot in “Move On,” one of the most emotionally powerful songs in Sondheim’s shimmering score. 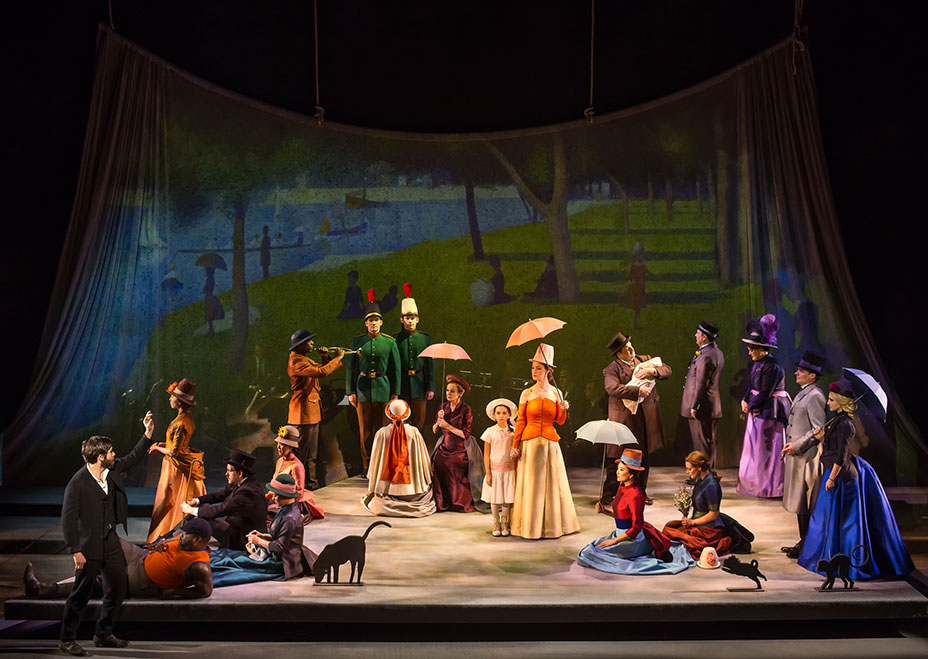 Gyllenhaal clearly has put in a lot of work on his vocals, and even when a hint of strain shows in the more demanding songs, the sweet lightness of his singing is matched by a purity of feeling, a truth if you will, that makes his performance deeply affecting.

Ashford is the funniest Dot in memory, her mischievous humor and openness playing in delicate counterpoint to Gyllenhaal’s Seurat, a man entirely shut in on himself and his work. But there are tremendously moving layers to her characterization too, revealing the searing wound beneath the pride when she’s forced to make the pragmatic decision to leave him and take their infant daughter Marie off to America with the jolly baker, Louis (Jordan Gelber). There’s both defiance and defeat in her reaffirmation of that choice, “Everybody Loves Louis.”

With her role switch in the second act to playing 98-year-old Marie, Ashford brings a sly Southern charm, a wily bluntness to the Charleston-raised immigrant, who nonetheless retains fierce ties to her French roots. That link is most acute when she asks that her wheelchair be turned to face Seurat’s masterpiece, A Sunday Afternoon on the Island of La Grande Jatte, allowing her to say goodbye to her mother. The duets sung by Dot and George provide some of the musical’s most wrenching moments, but Ashford also hits emotional peaks in Marie’s illuminating contemplation of their family legacy, “Children and Art,” delivered in a quiet voice cracked with age and yet full of warm feeling.

As the figures that populate Seurat’s massive pointillist canvas in Act 1 and then the art-world denizens of Act 2, the excellent ensemble mixes holdovers from the concert staging with newcomers, taking advantage of James Lapine’s incisive writing to etch lively character portraits often with only brief snatches of dialogue.

Jake Gyllenhaal Talks Tonys Ineligibility for 'Sunday in the Park With George': "It's Exciting"

Among the former, Brooks Ashmanskas and Liz McCartney are hilarious as wealthy American vulgarians, unimpressed by Paris aside from the pastries; and Ruthie Ann Miles brings poise and a crisp tartness to her role as a housekeeper dallying with the master. Welcome new additions include Fuller, her sharp authority veiling sad concerns as Georges’ mother; Ashley Park, a giddy delight as the more self-assured of two flirty Celestes, with an airy soprano that adds magic to the choral numbers; and Robert Sean Leonard and Erin Davie as Georges’ more established artist colleague and his snobbish wife, each of them revealing poignant notes of envy beneath their superiority. There’s wit both in the writing and the performances in the actors’ contrasting roles in Act 2.

Winner of the 1985 Pulitzer Prize for Drama, Sunday in the Park With George stands tall among both musicals and plays for its nuanced reflections on the sacrifices of making art — the difficult balance of art and commerce, and the ways in which art can change the way we look at the world and our place in it.

The isolation that often goes hand in hand with the desire for artistic innovation is revealed in intensely personal terms in Georges’ soliloquy “Finishing the Hat,” sung here by Gyllenhaal as an almost unbearably conflicted declaration of a man driven by his work and destined to remain alone because of it. But there’s as much rapture as suffering in Sondheim’s score, nowhere more so than in “Sunday,” the celestial choral number that closes both acts in ravishing harmony, the cast’s soaring vocals a testament to the fact that great art is its own enduring reward.

'Sunday in the Park With George': Theater Review