In summer 2015, Jake Gyllenhaal made a more than creditable musical theater debut, bringing an airy, tuneful voice and a disarmingly nerdy comic characterization to a special New York City Center concert staging of Little Shop of Horrors. Returning to the same venue, he negotiates quite a leap from the hummable retro pop-Broadway fusion of that show to the pointillistic complexity of Stephen Sondheim’s score for Sunday in the Park With George, perhaps the most personal and haunting musical ever written about the cost of making art. Headlining a cast of first-rate theater pros assembled for just four performances, Gyllenhaal once again holds his head up high.

Playing 19th century French painter Georges Seurat in the first act and then his great-grandson George, an American multimedia artist 100 years later in the second, Gyllenhaal did seem somewhat tentative at the beginning of the first performance, a glittery benefit attended by Sondheim and his librettist collaborator James Lapine, among many other luminaries.

The fragmented, talky nature of the musical’s early songs makes them quite difficult, demanding the supplest of vocal control, and the limited rehearsal time showed with the entire cast in some under-directed book scenes. But just as Gyllenhaal’s two characters gain in understanding of themselves, their creative process and their obstacles toward lasting emotional connection, so too did the actor’s grasp of the role gain in assurance.

He sang one of Sondheim’s most self-revealing songs, “Finishing the Hat,” with aching expressiveness and an acute understanding both of the obsessive passion for making art and the isolation that can accompany it. “Putting It Together,” another intimate exploration of the artist’s work, is more of a challenge with its torrent of tricky lyrics, and even if Gyllenhaal couldn’t hide the effort involved, he got through it with conviction. Two of his duets with co-star Annaleigh Ashford as Seurat’s muse Dot, “We Do Not Belong Together” and “Move On,” were especially stirring. And by the time the modern-day George has traveled full-circle back to his ancestral roots and to the setting of Seurat’s masterpiece, as the entire company gathers around him in a glorious reprise of “Sunday,” the hymn-like beauty of that song amplified the depth of feeling in Gyllenhaal’s affecting performance. 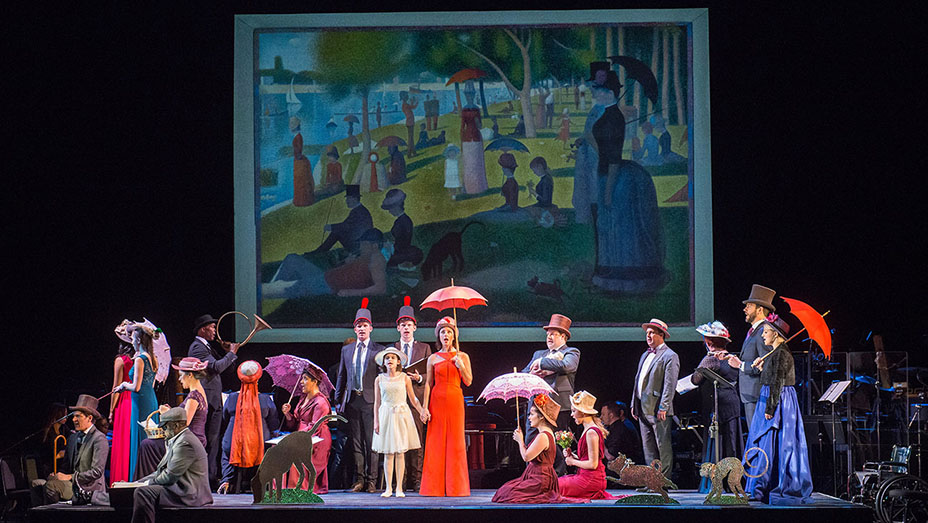 Fresh off her appearance in Fox’s disappointingly superfluous Rocky Horror Picture Show remake, Ashford at first seems odd casting. A 2015 Tony winner for You Can’t Take It With You, she’s at her best in comedy, and her take on Dot starts out a tad too perky, particularly when compared with the emotional nuance of Bernadette Peters (also in the house Monday night), who originated the role, or Jenna Russell, who played it on Broadway in the illuminating 2008 revival. But Ashford also burrows deeper as the show goes on, steadily uncovering the sorrowful yearning in a woman who chooses what she needs over what she truly wants.

The second act of Sunday in the Park, set in Chicago in 1984 and later back in Paris, has always been polarizing. But playing Marie, George’s 98-year-old grandmother, Ashford’s balance of gentle humor with a tenacious sense of family and proud personal history makes something extraordinary of the role, which resonates both retroactively and later on in her portrayal of Dot. Her delivery of another signature Sondheim song, “Children and Art,” is a moving high point.

While the thematic notes about creating order, harmony and balance out of confusion come together most eloquently in Act II, the musical is best known for its inventive fictional account in Act I of Seurat at work on his massive canvas, A Sunday Afternoon on the Island of La Grande Jatte. A portrait of gentle Parisian folk relaxing by the Seine, the 1884 painting could almost be a stage diorama. Lapine and Sondheim used that inspiration to imagine a rich assortment of distinctive characters, some personally acquainted with the taciturn artist and some merely captured by his brush from a distance.

Costumer Clint Ramos’ formalwear for the actors deftly provides a nod to the period via hats and accessories. But the key visual element of the staging — directed by the book writer’s niece, Sarna Lapine — is Wendall K. Harrington’s video components, which illustrate the long gestation of Seurat’s painting, with figures in the canvas appearing and disappearing. And in the second act, lighting designer Ken Billington goes wild with multicolored lasers splashed all over the auditorium during the presentation of modern-day George’s “Chromolume #7” installation.

The main event, however, is the cast. Producer Jeanine Tesori (the Tony-winning composer of Fun Home) has pulled together an exceptional company of top talents to find the humor and humanity in Seurat’s figures (as well as in 1980s art-world denizens). Standouts include Zachary Levi as Jules, a fellow artist with a begrudging admiration for Seurat’s experiments with color and light, and Carmen Cusack as his wife Yvonne, a snob who longs to be looked at the way Georges looks at Dot. As the married coachman and cook to Jules and Yvonne, Gabriel Ebert (a Tony winner for Matilda) and Ruthie Ann Miles (ditto for The King and I) bring tart characterizations; Phillip Boykin’s bassissimo gruffness is an ideal fit for the Boatman; and Brooks Ashmanskas and Liz McCartney are deliciously droll as vulgar nouveau riche Americans who can take or leave Paris, aside from the pastries. Phylicia Rashad delicately mines the concern hidden beneath the disapproving demeanor of Georges’ haughty mother, flanked by the always-terrific Lisa Howard as her Nurse.

As for Gyllenhaal, his plan to return to Broadway this season in a revival of the Lanford Wilson drama Burn This has been postponed until the 2017-18 season due to a scheduling conflict. But it seems likely that his stage future might also eventually include a musical, if his continuing flirtation with the form and evident vocal coaching are any indication.