There are lots of reasons to root for Superhero, not least because entirely original musicals like this one are going the way of the polar bear in a theatrical landscape of revivals, jukebox assemblies and regurgitated movies. It has a team of skilled craftsmen in director Jason Moore, writer John Logan and composer-lyricist Tom Kitt, backed by sharp design elements and appealing performances from a cast led by talented pros Kate Baldwin and Bryce Pinkham, with young newcomer Kyle McArthur. But this earnest fusion of damaged-family melodrama with comic-book fantasy only occasionally rises above the level of pleasant or cute.

Full disclosure: I have zero interest in superheroes and haven’t felt compelled to open a comic book since childhood. Sure, I enjoyed Black Panther and Wonder Woman, and appreciated what those movies meant in terms of long-overdue studio representation for character demographics too seldom entrusted to hoist a tentpole. But with few exceptions, the seemingly unstoppable proliferation of Marvel and DC projects and their imitators on screens big and small just seems like the dispiriting homogenization of mainstream entertainment.

Superhero‘s biggest problem, however, is that soon after a mildly intriguing opening it becomes one-note and whiny. There are valid reasons for the central characters to be downcast. Teenage Simon (McArthur) was so traumatized after witnessing the accident that killed his father two years earlier that he refuses to discuss the loss, instead retreating into an imaginary world by creating comic-book adventures (“The Adventures of the Amazing Sea-Mariner”), a passion he inherited from his dad. Simon’s mother Charlotte (Baldwin), an untenured assistant English lit professor specializing in Romantic poetry, has been only marginally more successful at processing her grief, struggling to find a way to move on while remaining consumed by anxiety for her son. 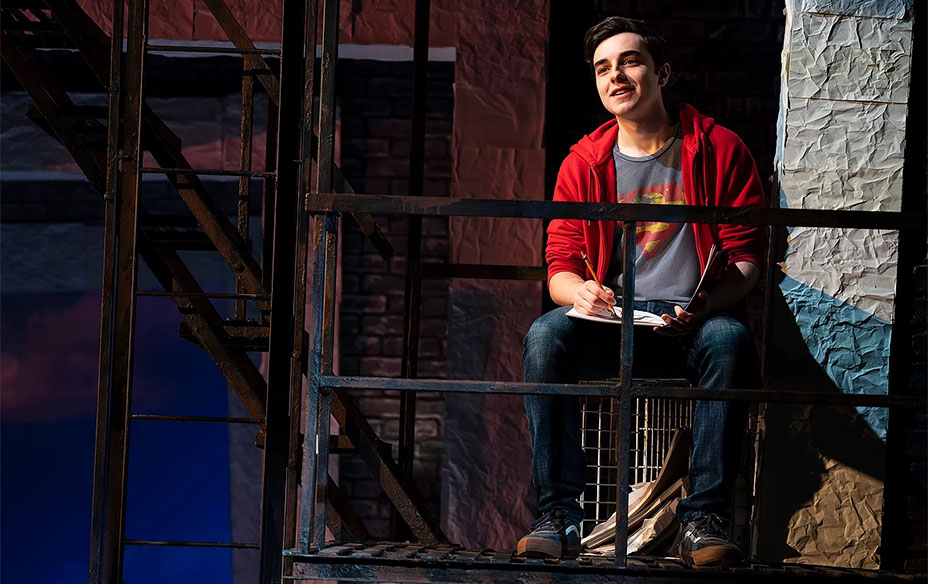 But in a show built out of one samey-sounding song of emotional neediness after another, neither Logan nor Kitt have mustered sufficient pathos to make us care much about mother or son. It takes until the top of Act II for someone to sing anything remotely declarative. That welcome development is handed not to either member of the vulnerable family unit but to the title character, Jim (Pinkham), the mysterious unemployed bus driver who lives down the hall in apartment 4B.

Thereafter, the score mostly reverts to wishy-washy “If only” tunes as we wait for the inevitable communication breakthrough between Charlotte and Simon. And that provides such a soft conclusion that there’s scarcely any sense of them having shifted far from where they started out.

The insubstantial show’s chief narrative distinction is Simon’s belief that Jim possesses superpowers. This is deftly set up in an early scene where the teen is doodling away on his sketchpad on the fire escape outside their apartment when he witnesses Jim, in a moment of angry frustration, appear to crush a fire hydrant like it was a marshmallow. Simon then urges his mother to flirt with the stranger and uncover his secrets, and it turns out neither Charlotte nor the equally lonely Jim need much encouragement in that department.

Meanwhile, Simon begins to envision a bolder future for himself as a superhero’s sidekick, not that this makes him any more interesting or consistently drawn as a character. He’s an ersatz Evan Hansen. Up to now, he’s been too shy even to talk to Vee (Salena Qureshi), the self-possessed high school classmate oblivious to his crush on her. But he summons the courage to volunteer his services for her science project, which aims to save the world from environmental disaster. Simon’s contribution, in keeping with the show’s pedestrian sentimentality, is all about finding comfort in love, even while the world is ending. 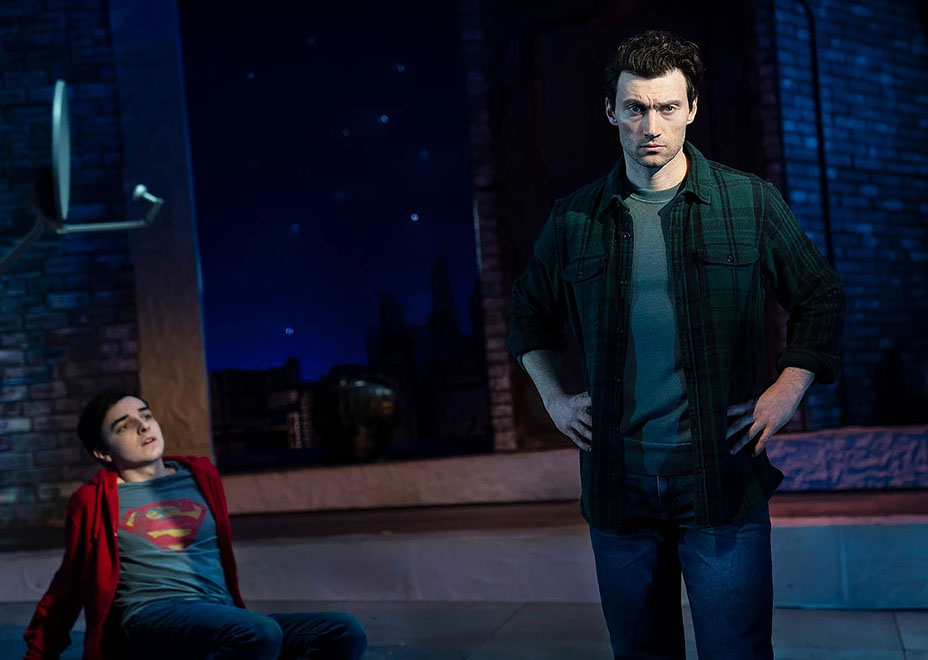 Logan has worked extensively on the stage (Red, I’ll Eat You Last, the upcoming Moulin Rouge!), on film (Gladiator, The Aviator, Hugo) and in television (Penny Dreadful), but as a musical librettist, he fails to inject dramatic momentum into the connective scenes linking the 20 or so songs. And while Kitt’s sophisticated orchestration skills have vitalized musicals from American Idiot to SpongeBob SquarePants, his scores for shows like Next to Normal and If/Then tend tonally to be all of a piece rather than containing memorable standouts. The songs here — on which Kitt is doing double-duty rather than working with another lyricist, as in the past — are pretty enough, but bland and interchangeable.

Hearing the silvery soprano of Baldwin (seen recently in Hello, Dolly!) is always a pleasure, and Pinkham (A Gentleman’s Guide to Love & Murder) brings welcome notes of low-key humor along with stirring vocals. When the truth comes out about Jim and he sings “It’s Not Like in the Movies,” there’s a momentary surge of poignancy. But ultimately, the insight that superheroes are just as insecure, alone and prone to melancholy introspection as any mere mortal in this imperfect world doesn’t rescue the show for long from its mopey pall. Nor is it sufficiently new to give the musical a fresh angle, since the invulnerable caped crusader has long been outnumbered in pop culture by the tormented soul whose superpowers provide no shield from inner demons.

Director Moore (currently delivering way more fun on Broadway with The Cher Show) keeps the scenes moving and provides visual energy, splashing video designer Tal Yarden’s comic-style graphics all over the concentric skewed panel frames of Beowulf Boritt’s set. And Jen Schriever’s lighting paints some lovely rooftop skyscapes. But Superhero is a wan little musical that has no compelling story to tell. While the show is far from terrible, at its best, it’s sweet and innocuous, at its worst, dull.