The following review is of the New York premiere, which opened at the Public Theater on Nov. 3, 2016. The play has since transferred to Studio 54 on Broadway, reopening March 26, 2017. Alison Wright replaces Miriam Shor from the original cast, which otherwise remains intact.

In her 2009 Pulitzer Prize-winning play Ruined, Lynn Nottage wove a scorching drama out of stories she had gathered while interviewing brutalized women from the civil war-torn Democratic Republic of Congo. For her new play, Sweat, she traveled many times to Reading, Pa., to absorb details from the lives of steel mill workers whose stability was threatened by the decline in American manufacturing and the undermining of labor unions. While Nottage doesn’t always manage to incorporate her research into entirely organic dialogue in the overlong play’s lumpy first act, what follows becomes a powerful and compassionate song of blue-collar despair.

The action of Sweat takes place in 2000 and 2008, roughly aligned with the beginning and end of the George W. Bush administration. But overlapping themes have surfaced throughout the current election cycle, adding to the politically charged play’s timeliness. Kate Whoriskey’s production arrives at the Public Theater following developmental runs at the Oregon Shakespeare Festival and Arena Stage in D.C., which co-commissioned the drama, winner of the 2016 Susan Smith Blackburn Prize for an English-language work by a woman playwright.

Most of the scenes unfold in a Berks County bar frequented by workers from a local steel tubing plant. Serving up cheap tap beer and whiskey is Stan (James Colby), who ended his family’s proud multigenerational line of factory hands when he was injured on the job due to faulty machinery. But he remains invested in the workplace concerns of his customers, particularly once rumors of layoffs start circulating.

The regulars include level-headed Cynthia (Michelle Wilson), volatile Tracey (Johanna Day) and messy drunk Jessie (Miriam Shor), a close-knit trio who have worked side by side on the assembly line for years, watching one another’s backs. Then there’s Tracey’s son Jason (Will Pullen), who has no ambition beyond continuing at the mill; and Cynthia’s son Chris (Khris Davis), who views college as his ticket out of the dying town. Also wandering in from time to time is Cynthia’s semi-estranged husband Brucie (John Earl Jelks), the shell of a once-principled man, usually looking for a handout to feed his drug habit.

The outsider in the picture is Oscar (Carlo Alban), a hard-working American-born busboy of Columbian descent, who remains virtually invisible to the customers — white or black — until he responds to a Spanish-language handbill seeking non-union labor at the steel plant. 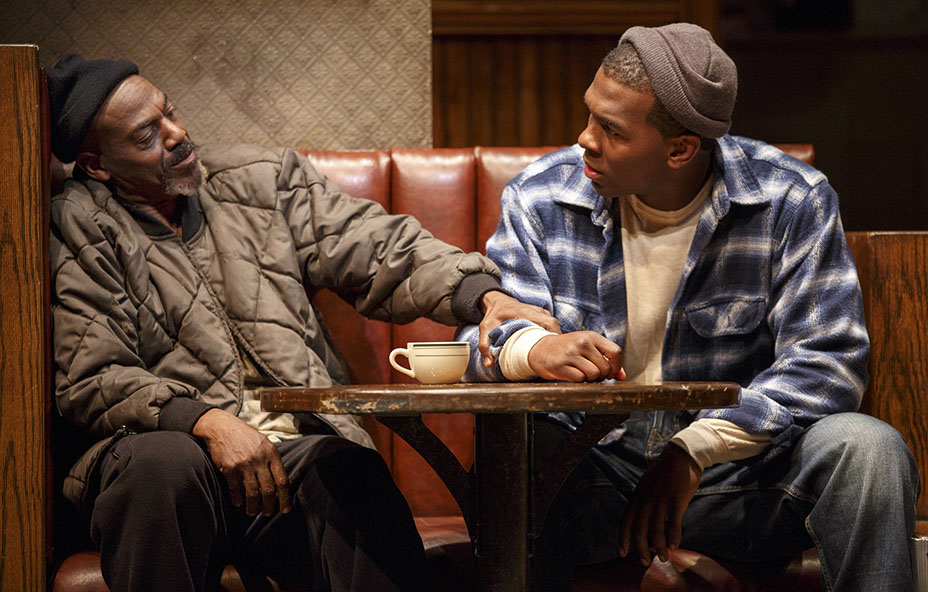 Nottage hints at the climactic action in broad strokes from the outset, starting in 2008 as a parole officer (Lance Coadie Williams) conducts separate interviews with Jason and Chris following their release from prison. The two friends have veered in different directions during their incarceration; the Aryan Brotherhood tattoos on Jason’s face illustrate his turn to the extreme right, while Chris has looked for comfort in religion. But neither of them is adjusting well to post-prison life, and a recent encounter has stoked up unresolved feelings.

The play then rewinds to track the festering conflicts that ignited among the group eight years earlier, amplified by anxiety over the steady exodus of jobs moving abroad under the North American Free Trade Agreement. The most painful friction is between Tracey and Cynthia, factory floor pals for more than two decades. When Cynthia, who is African-American, gets a supervisor position for which both of them applied, Tracey makes no secret of her grumbling suspicion that the hire was determined by racial quotas. And when machines are moved out of the plant overnight, followed by an operational shutdown, picket lines and prolonged contract renegotiation, Cynthia is accused of failing to look out for her friends.

Sweat struggles to overcome the familiarity of this melancholy, quintessentially American labor drama, and too many of the early exchanges play more like union meeting discussion points than overheated tavern conversations. The talky writing also could use a stronger shot of humor in characters that often seem more like types than individuals. But by framing the late action against the massive government Wall Street bailouts of 2008, as witnessed by working men and women who benefited from no such lifeline, Nottage strikes plangent chords.

The second act builds a feeling of crushing reality closing in on people with too few options, as anger, irrationality and the urge to place blame cause a visceral eruption of violence. Glimpses of the outcomes of Tracey and Cynthia, for instance, echo countless stories of people across America, forced to adapt to reduced circumstances with varying degrees of resilience. Nottage introduces issues of race with refreshing candor, and she observes the lack of correlation between the company loyalty of workers and that of their corporate bosses with searing empathy, underscoring the bitter irony of factory hands being asked to make sacrifices to keep plants running in a tough economy. The open-ended concluding note resonates sorrowfully as Chris and Jason face up to the consequences of their actions.

The main feature of John Lee Beatty’s revolving set is the bar, rendered in loving detail that will be familiar to anyone who ever stopped for a beer in a grungy small-town watering hole. Not all the performances are quite so finely etched though, and Day seems somewhat miscast as the coarse, unapologetically blunt Tracey. But Whoriskey, who also directed Ruined, coaxes sensitive work from Colby, as the rueful barkeep attempting to be the voice of reason; Alban, as an honest man whose dignity is constantly being assailed; and Wilson, who conveys the bitter sting for Cynthia of an opportunity that leaves her feeling torn and ultimately exploited.

The standout in the ensemble, however, is Davis, who follows his intensely physical work in last season’s boxing drama, The Royale, with a soulful characterization as a smart young man trying to hold onto some kind of future in a seemingly hopeless situation.