In the atmospheric new revival of Sweeney Todd, the Grand Guignol musical masterwork by Stephen Sondheim and Hugh Wheeler that never gets old, you might find your scalp being massaged with Pirelli’s Miracle Elixir to promote hair regrowth. Or maybe you’ll have the wits scared out of you when “The Demon Barber of Fleet Street” pounces on your seat, waving one of his trusty silver razors just inches from your face. All while you’re still digesting your pie and mash. That was this reviewer’s experience, and though I’m not surprised that four days later, I’m still as bald as I was before, the chilling intimacy of this ingenious site-specific production has stayed with me.

Actually, calling it site-specific is cheating a bit since the site was created for this New York transfer rather than the other way around. The production debuted in 2014 at Harrington’s Pie & Mash Shop in Tooting, South London, the city’s oldest continuously operating pie shop, before moving to the West End.

For its off-Broadway run, designer Simon Kenny has transformed the Barrow Street Theatre in Greenwich Village into an uncanny facsimile of the original setting. The walls are artfully aged in jaundiced yellow mottled with water damage, and the rusty air vents serve more to hide the modern stage lighting than to expel the acrid smoke wafting up from imagined furnaces in the bakehouse below. The optional extra of traditional fare is even served on old-fashioned enamel plates.

As a concept, it holds together remarkably well, with resourceful use of candlelight and lanterns to enhance the period illusion. We’re drawn into a squalid world in which Mrs. Lovett (Siobhan McCarthy) — the widowed shopkeeper purveying “The Worst Pies in London,” as her first song delicately puts it — finds a crafty solution to the prohibitive cost of meat. That arrives thanks to the slow-boiling murderous rage of her new tenant, Sweeney Todd (Jeremy Secomb), the escaped former convict once known as Benjamin Barker. Back in Fleet Street and resuming his old barbershop trade, he’s determined to exact revenge on corrupt Judge Turpin (Duncan Smith), who had him sent away 15 years earlier on trumped-up charges. Anyone else who crosses his path in the meantime is gravy. Literally.

With long bench-style dining tables reducing the playing space, director Bill Buckhurst’s production can at times feel cramped, but that claustrophobia works to the show’s distinct advantage. The cast of eight move amongst the audience, often scrambling over the tables, to implicate us all in the grisly deeds we’re witnessing. And Secomb’s Sweeney, cadaverously pale and gaunt, with a death stare that scalds, makes us share the fury of a working-class man trampled by the obscene privilege of wealth and power. Robbed of his family by the outwardly respectable Turpin — a villain in the great tradition of contemptuously pompous British upper-crust entitlement, played with lip-smacking relish by Smith — Sweeney is as much a tragic figure of pathos as a terrifying monster hollowed of all mercy. 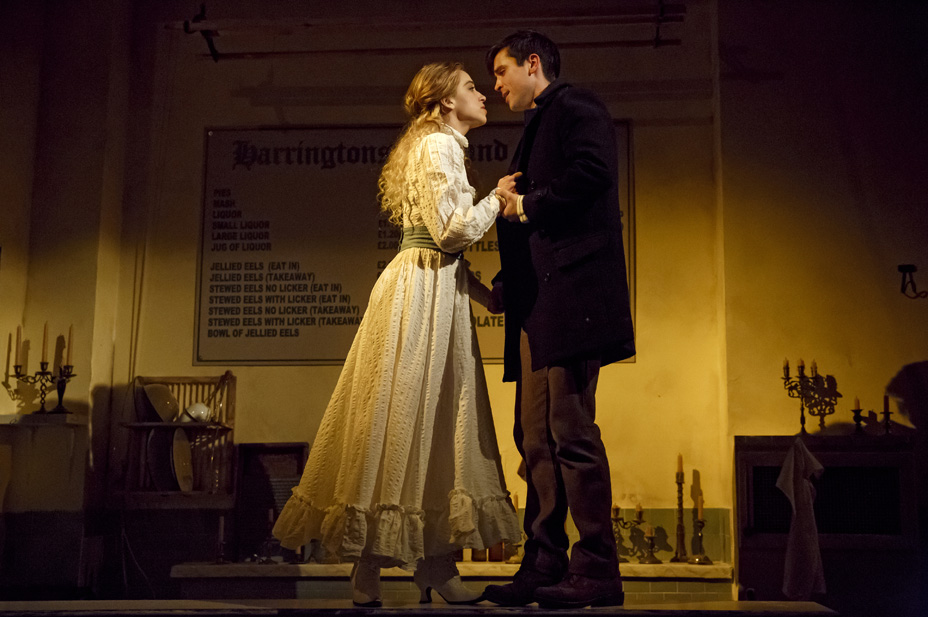 Getting up close and personal with this bloodlust-obsessed antihero and his deliciously amoral enabler Mrs. L. heightens both the horror and the coal-black humor, creating a potent sense of dangerous confinement that puts everyone at risk once Sweeney’s one-man rampage spirals out of control. Hearing the death gurgle of a murder victim with a freshly slit throat just a few feet away, or seeing the light catch a razor, sends a cold chill down the spine. Likewise the screeching whistle blasts and floods of red light coming from the room at the top of the stairs every time another customer is dispatched.

But the compression also intensifies the show’s depiction of love in its many forms: radiantly hopeful or shattered, pure of heart or ugly and twisted, reciprocated or misplaced and sadly self-deluding. That covers Sweeney’s undiminished feelings for the wife he believes is long dead and for the daughter, Joanna (Alex Finke), he’s set on rescuing; the swooning passion of innocent young Anthony (Matt Doyle) for Joanna, adopted by Judge Turpin; the Judge’s pedo-creepy plan to transition her from ward to wife; and the willfully blind fantasies of Mrs. Lovett, dreaming of connubial bliss “By the Sea” with a man consumed by vengeance.

Even the obsequious devotion of Turpin’s muscle, Beadle Bamford (Brad Oscar), is a kind of love. And the filial affection of young urchin Toby (Joseph Taylor) for Mrs. Lovett, who shows her soft maternal side in return, feeds the musical’s most poignant thread in their mutual promise of protection, “Not While I’m Around.” That vulnerability makes it all the more affecting when the horrors he witnesses prompt Toby’s descent into madness.

All these clashing sentiments burn bright in an accomplished ensemble combining London holdovers with newcomers. (New York stage favorites Norm Lewis and Carolee Carmello rotate into the lead roles April 11.) They may not eclipse memories of the show’s great Broadway casts, but they work together as a tight unit in the service of Buckhurst’s concept to tremendous effect, both dramatically and musically.

The same cohesion applies to the musical components, with a tiny band that yields a surprisingly robust sound. Music director Matt Aument on piano is accompanied only by violin and clarinet, but Benjamin Cox’s arrangements fill the small space with full-bodied music. Superb use is made of the higher vocal registers in the cast of Finke and Betsy Morgan (as Pirelli and the Beggar Woman) to capture the feverishness and fear that course through the show like a barely stifled scream. And the lyrics are clear as a bell — many of them, like those for the hilarious “A Little Priest” or Sweeney’s grim “Epiphany,” among Sondheim’s cleverest.

There have been countless scaled-down productions of Sweeney Todd since Harold Prince’s industrial-size 1979 original, but this fiendishly immersive reworking seems just right for millennial theatergoers who like to get in on the action. The urgency and immediacy of its storytelling make it a terrific introduction to a glittering musical by a composer at the peak of his powers, and also an invigorating new spin for audiences who know and love this brilliantly conceived Victorian nightmare.