The 50-year-old musical Sweet Charity has always been a shiny bauble, elevated by some terrific songs by Cy Coleman and Dorothy Fields, and exhilarating dance numbers, but weakened by the emphasis on laughs over pathos in Neil Simon’s superficial book, which fizzles out in a bittersweet ending. The matchless pairing of director-choreographer Bob Fosse and star Gwen Verdon by most accounts overshadowed the material’s weaknesses in the 1966 Broadway premiere. Directing his first movie with the 1969 screen version, Fosse hadn’t yet mastered the glittering hard edge that would serve him so well three years later in Cabaret. But the film remains enjoyable, with its kaleidoscope of ‘60s kitsch and kinetic energy, plus a disarming characterization from Shirley MacLaine.

The challenge for any revival of the show is finding a headliner who has the necessary song-and-dance skills and can channel the bruised vulnerability as well as the enduring innocence and eternal optimism of Charity Hope Valentine, the New York City dancehall hostess for whom love is a religion that yields few blessings. This stripped-down production from off-Broadway’s New Group meets the requirements, and then some, in one of our most gifted musical theater stars, two-time Tony winner Sutton Foster.

Reteaming after their rewarding 2014 collaboration on Violet, in which emotional intimacy was the keynote, Foster and director Leigh Silverman bring comparable insight to Sweet Charity. They embrace the goofy, big-hearted openness of the title character, but also the bleakness of her reality, in many ways making her truer to her inspiration, the immortal Giulietta Masina’s sad-clown Roman hooker in Federico Fellini’s Nights of Cabiria. There’s grit and sleaze under the tacky sequined professional apparel of Charity and her colleagues at the Fandango Ballroom, where they ply their trade as what used to be called “taxi dancers.” “Who dances?” one of them quips. “We defend ourselves to music.” But beneath their sass and cynicism, these girls still yearn.

Mounted on a short thrust stage, with a strong multitasking ensemble of just 12, and a six-piece all-female band up above performing Mary-Mitchell Campbell’s jazz-combo orchestrations, the small-scale production puts the action practically in the audience’s laps. That means we share directly in every dizzying moment of possibility that surfaces for Charity as well as every rude awakening that follows.

If the approach falls short of revelatory, that’s perhaps because this flawed show can never seem complete without Fosse’s dance moves, so inextricably associated with numbers like “Big Spender” and “Rich Man’s Frug.” Choreographer Joshua Bergasse occasionally nods to the Fosse vernacular with a foot curl, a mincing strut or a frisky gallop. But his dances, especially in ensemble numbers like “The Rhythm of Life” and “I’m a Brass Band,” too often become chaotic. Foster, however, makes the choreography work for her; few if any musical-theater performers can touch her in terms of acting through her dancing.

One of director Silverman’s cleverest ideas was to make the various men who drift through Charity’s life literally interchangeable. In an impressively versatile performance, Joel Perez (Fun Home) plays Charlie, the louse of a boyfriend who wins Charity’s trust and then shoves her into the lake in Central Park while stealing her savings; Herman, the tough-guy Fandango manager with the soft heart; Vittorio Vidal, the Italian movie star who gives her a taste of glamor before returning to his drama-queen girlfriend Ursula (Nikka Graff Lanzarone, priceless); and Daddy Brubeck, the hepcat alternative-religion guru who switches Charity on to “The Rhythm of Life.” Perez’s distinctive characterizations in each part extend also to his supple vocals. 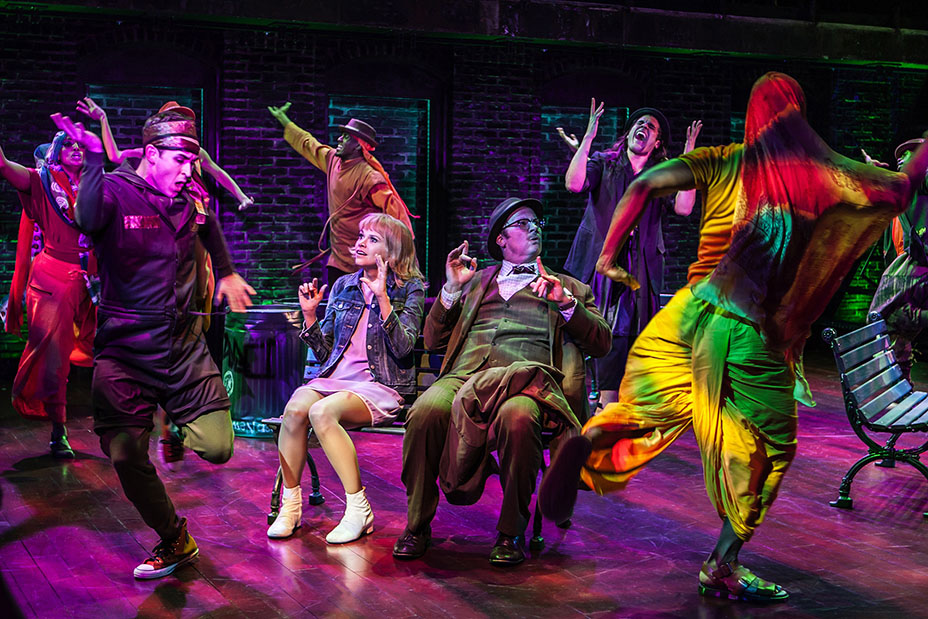 The one exception to Perez’s monopoly on the principal male roles is Oscar Lindquist, the neurotic accountant who appears to be the answer to love-starved Charity’s prayers, his search for “inner contentment” making him her ideal soul mate. Shuler Hensley plays him with such schlumpy warmth and sweetness that you really do long for it to work out for them, right from their beautifully played first meeting, when they get trapped together in an elevator at the 92nd Street Y. And when this genuine guy inevitably gives in to his milquetoast side and is unable to overlook Charity’s past, Hensley makes it as heartbreaking for Oscar as it is for her.

Of course, the pulse of the show is the incandescent Foster, ably flanked by Asmeret Ghembremichael and Emily Padgett as her teasing but affectionate pals at the Fandango, Nickie and Helene. Those gals are pragmatists, but they’re not above daydreaming in “There’s Gotta Be Something Better Than This” and “Baby, Dream Your Dream,” both of which are just lovely. Unlike her jaded colleagues, Charity wears her hopefulness on her sleeve, maintained with affecting determination that often veers into willful self-delusion, even in the face of cruel disappointment. What’s most remarkable about Foster’s performance is the way she constantly juggles resilience with defeat, dignity with humiliation, joy with sorrow.

Foster is the rare star defined by her generosity as a performer. She draws her energy not from big solo moments but from her fully engaged interplay with the ensemble, connecting with everyone on the stage, as much as the audience. Her talent for physical comedy is peerless, notably as she tries to keep up with the dance steps of the poseurs at the Pompeii Club, pinching herself to be mingling with such sophisticates; that makes the scene a hoot, even without the sizzling Fosse dynamic. Or when she fixes a sandwich before retreating to Vittorio’s closet, where she hides out and observes as if she’s watching a torrid screen melodrama while he serenades Ursula in “Too Many Tomorrows.” Hurling herself at every guy who comes along in “You Should See Yourself,” Foster is like a silent-comedy slapstick artist.

The infectious buoyancy of her performance crescendos in “If My Friends Could See Me Now,” armed with Vittorio’s gifts of a top hat, cane and tap shoes. Anybody who has seen Foster in shows like Thoroughly Modern Millie or Anything Goes knows her virtuoso dance credentials, but she’s too good an actor to bring out-of-character poise and precision to Charity. The gangly physicality and seemingly uncontrollable exuberance of her movement here are an intrinsic part of her take on the role. There’s also something wonderfully unladylike about the blissful disregard with which she flashes her lavender lace knickers.

That breezy nonchalance makes it all the more devastating when her dreams crumble, a blow articulated in Silverman’s smart choice to close the show with Charity’s introspective question “Where Am I Going?” (normally placed midway through the second act), surrounding her with Fandango dancers and patrons all similarly left behind, like ghosts. With its notes of melancholy ambiguity, the conclusion might still seem tentative by conventional musical standards, but Foster sells it, with real tears conveying both despair and defiance.

Derek McLane has designed the production with effective economy, allowing for brisk scene changes as a handful of items are brought on and off the bare stage to establish various locations. Jeff Croiter’s lighting also is sharp, capturing the dead-end squalor of the Fandango without obscuring the possibility of a fairy-tale exit. There are pluses and minuses with this kind of lean, modern treatment, but what’s lost in spectacle and theatrical magic is gained in closer access to a tender character study. If, as whispered, the hot-ticket production moves to Broadway next season when Foster’s commitment to TV Land’s Younger permits, it could use a bit more oomph in the choreography, which should be a prerequisite of upsizing to a larger stage. But the crucial component that requires zero improvements is Foster’s gorgeous performance. She’s perfection.