“What you been up to — for 20 years?” says Jonny Lee Miller to Ewan McGregor in T2 Trainspotting, the sequel to the 1996 cult-hit film that launched careers and defined the Cool Britannia era. Also starring Robert Carlyle and Ewen Bremner, the Danny Boyle-directed sequel checks in on former heroin addict Mark “Rent” Renton and his drug pals Spud, Sick Boy and Begbie.

Ahead of Sony’s limited release of the TriStar title in the U.S. on Friday, Boyle spoke to The Hollywood Reporter to talk about shooting in a much more vibrant Edinburgh, following up on a now-iconic soundtrack and why no marketing materials include footage of Miller and McGregor’s unique duet.

When did you feel the urgency for a sequel?

We tried to do one 10 years ago — Irvine Welsh has written a sequel called Porno, and we felt then that it was an opportunity and that we should. But we didn’t make a good job of it; I think we rejected it because we felt it was too similar to the first film and too much of a cash-in, a rehash of the same steps. It was just another caper, really. I think that was good that we rejected it — it told us that we knew that we’d have to do something that was more challenging if we were gonna go back to these guys. I didn’t even send that script to the actors because I knew they would turn it down — or not reply, which is the way things happen in Hollywood, you just don’t hear from people. Nobody ever says no, you just hear nothing, an echo, like you’re alone!

But when we developed this script, we came up with something that’s much more acute and personal. There’s a lot of fun, but also real poignancy. I had an instinct that if I sent it to the actors, they’d say yes, and they literally shouted back straightaway. And we didn’t give them very much money; they all got paid the same like the first film, and they get a bit more money at the backend if it’s successful, so please contribute to that if you can for these poor actors! (Laughs.) It was a wonderful moment of knowing that if we make it well enough, it could stand beside the first film and complement it, in a way. 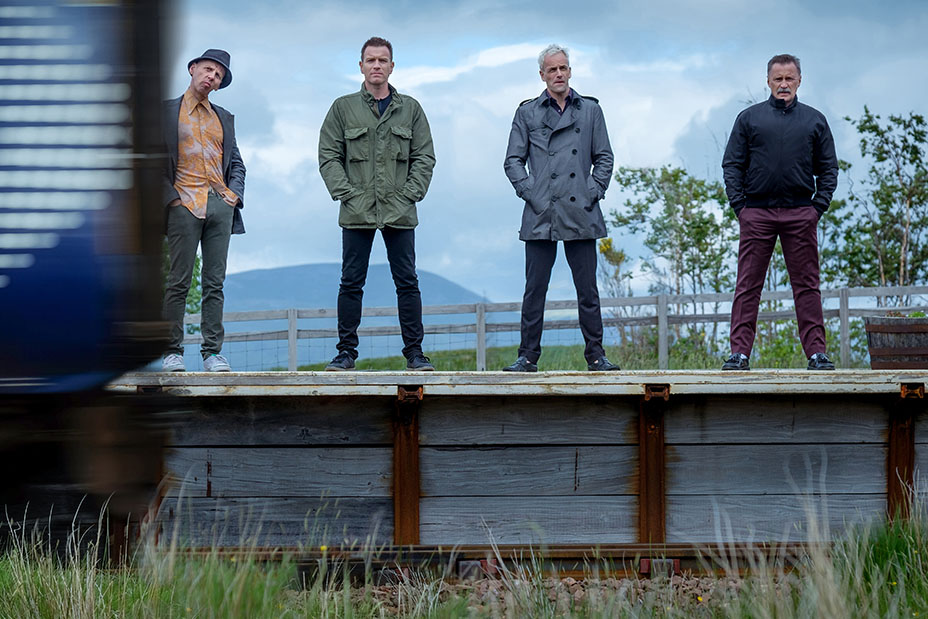 Which character was the toughest to figure out what he’d be doing after 20 years?

Weirdly enough, it was Sick Boy. Renton had such an obvious exit and entry, Begbie’s been in prison the whole time, and Spud has been on an incredibly yo-yo of rehab, addiction, rehab. But Sick Boy — the cunning one, the exploiter of people, the schemer — we decided that he’d been on an ever-decreasing [spiral]. He’d maintained his appearance — despite the fact that he’s in his mid-40s, he’s still bleaching his hair blond to keep that look. He’s desperately trying to hang on to the past, in a way.

What was the biggest difference between the two shoots?

Edinburgh. We hadn’t filmed very much in Edinburgh the first time; in ’96, it was a very gentile town and a pristine, kind of Georgian and medieval, historic city. They didn’t really like us being there because [the movie’s about] rough characters from the fringes of Edinburgh. Junkies, really. But since then, the film had become a big hit for Edinburgh and Scotland, and now they were desperate for us to film there. They offered us everything!

But what impressed me most is how young it is as a city — since the first film, a huge student population has arrived, as well as a migrant-worker population from Eastern Europe. They’ve made the city so much more vibrant and dynamic. The vibe was so much better than when we filmed there the first time. 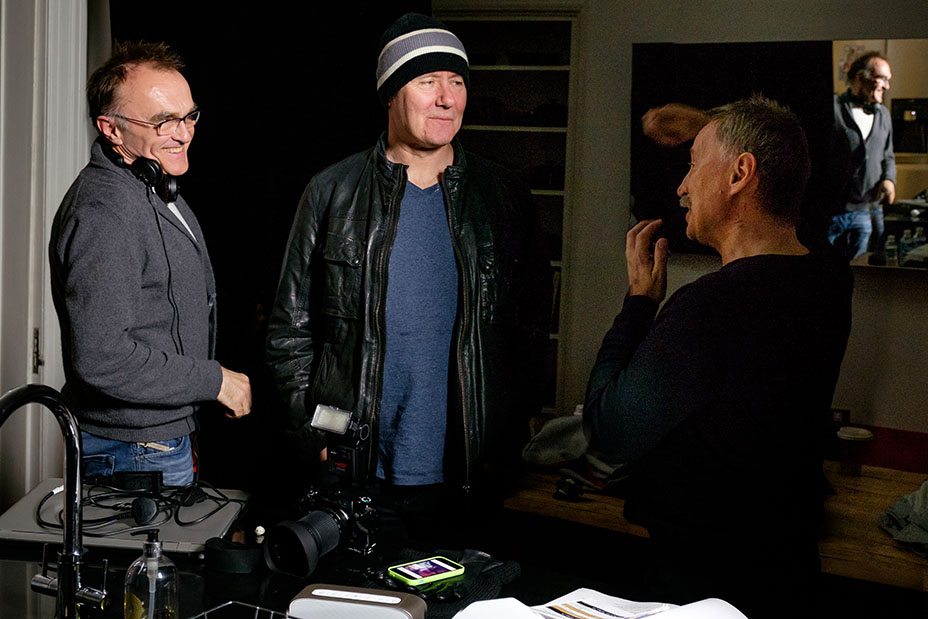 The first film’s soundtrack is iconic. How did you go about building one for T2?

The impact of the first film’s soundtrack was obviously something that we never expected — we just put all our favorite tunes on it, saw that it works, and everybody loved it! You come to the next one, and there is a lot of pressure: “The soundtrack will be just as good as the first one, won’t it?”

We wanted to touch on the original film because of the power of memory of music — when you hear certain chords, it triggers a kind of muscle memory that you can’t control. They’re almost unconscious, in a way. But we didn’t want to just repeat a song, so if we were going to use them — and we did use two or three — they had to be remixed or reimagined. We were lucky to get a Prodigy remix of Iggy Pop’s “Lust for Life,” and Underworld reimagined “Born Slippy,” but its context now is completely different, which I love.

Then you look for something that you hope will be a more modern heartbeat, so you’re not just stuck in the past. This amazing band in Edinburgh called Young Fathers are three guys from the same Edinburgh estates where Irvine Welsh drew his first stories from. They weren’t alive when Irvine was writing the original stories, but their music fits, and we used three or four of their songs in the movie. They came into the studio where we were shooting, but they’re musicians, so they were really unimpressed by everything. I thought, “Oh, God, we’ll never get their music,” and then they sent over a new song the next day called “Only God Knows.” 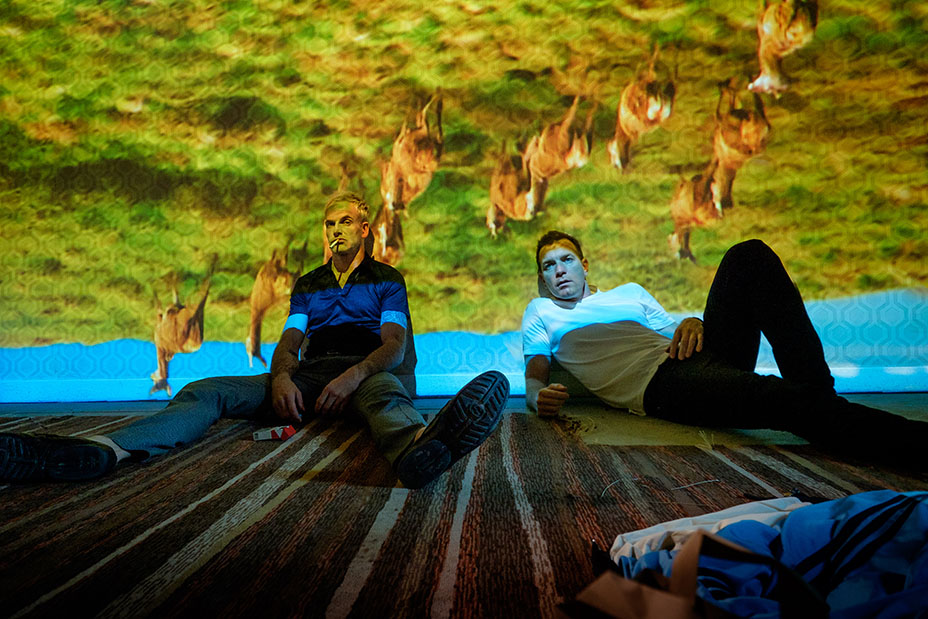 Speaking of music, tell me about that duet between Ewan McGregor and Jonny Lee Miller.

It’s a song about sectarianism, [which is why] we’re not allowed to use any of it in the advertising materials. It’s poking fun at everybody who’s involved in sectarianism, which is just another form of racism, another branch of intolerance. So it’s a wonderful deconstruction of it. It took three days to shoot. We were in this incredible club with 150-200 Scottish extras who all know about sectarianism. We hadn’t told them what the scene was about, and that first moment when they realize what Ewan McGregor was singing about was like, “What?!” Then it just becomes this riot, and everybody joins. It’s ridiculous and wonderful and takes no prisoners.