Producer Todd Garner — a longtime studio executive turned producer who has worked on everything from Black Hawk Down to the Paul Blart: Mall Cop franchise — just launched a podcast all about his chosen, if not a bit misunderstood, line of work.

With The Producer’s Guide, Garner flexed some expert interview muscles straight out of the gate with his first guest, longtime friend Adam Sandler, by showing he knows how to handle A-list interviews while also getting a guest to open up about a subject he rarely talks about. In Sandler’s case, he discussed his Netflix deal, a groundbreaking contract that made headlines in 2014 when the comedian signed a four-film deal only to re-up for an additional four in March 2017. (In an April 2017 earnings call, Netflix content chief Ted Sarandos revealed that since December 2015, users had consumed half a billion hours watching Sandler’s movies on the platform.)

Sandler told Garner on his PodcastOne show that he was happy he “said yes eventually” to the Netflix deal, even though he wasn’t sure what streaming was all about when he was first approached. “I’m glad my brother, my wife, [WME agent] Adam Venit, and [manager Sandy Wernick] kept talking to me about it. I didn’t know what Netflix really was. During that summer when they were offering me all that stuff, I started getting into it and asking kids on the street how they watch their movies,” said Sandler before praising the streamer’s leadership team, including Sarandos and old friend Scott Stuber. “Ted was such a nice guy, it was such a fun time being with him. He’s crazy with knowing comedy. He knows everything. He’s the same way we are, talking about The Jerk and talking about movies and what made him laugh. Ted has great notes.”

The conversation pivoted to cover Sandler’s early career, his approach to comedy, how he edits jokes in post, and what he looks for in a producer. The latter is key to what Garner, who produced the Sandler vehicles Anger Management and Jack and Jill, is trying to do with this new producers-centric podcast: educate, inform and inspire all while steering clear of seemingly ever-present negativity in the news, both about Hollywood and beyond.

In an interview with The Hollywood Reporter, Garner elaborated on the handful of reasons that led him to launching The Producer’s Guide, but the one that seems closest to his heart is passing along the passion for how to make it as a producer in today’s Hollywood. “If I could reach just one person, maybe someone in Kansas who believes everything they read about Hollywood — that it’s quickly coming to an end and if you’re not Marvel, don’t even try to make a movie — I want to show them a more realistic and optimistic viewpoint on the business,” he explained. “If I heard someone say, ‘I’m making a movie because I heard your [podcast], that would make me happy.” 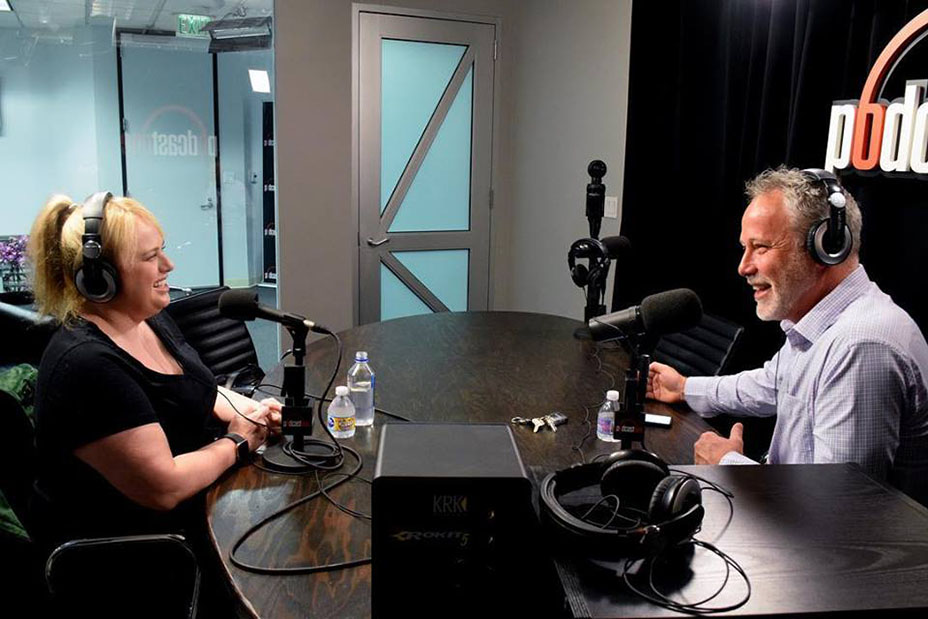 Another reason: Garner said that he’s heard so many cool stories, whether it be on the set or in studio meetings, and he wants to pass those along to listeners. “I also just want to hear from people about where they came from and why they make the decisions they make,” he said.

Before bringing on Sandler in his first episode, Garner recalled an experience he had on a screenwriting panel in Nashville more than a decade ago. An audience member raised his hand and tossed a bomb toward Garner by asking him, “Why do you make such shitty movies?” He connected the insult to a devastating experience that he and his wife went through when they found out right around Christmas that their daughter, Jolie, had passed away in utero.

His wife, Shana Hiatt, still had to deliver the baby girl, and the traumatic ordeal stretched over three days. To get through the dark times in the hospital (“the worst of our lives”) they binged comedies. “I would look over and for brief moments, my wife would be laughing,” Garner said. “She was transported by these comedies, and I thought that if I can do that with one or two of my movies for someone in pain, then I’ve done my job.”

He continued: “Look, I have aspirations just like anyone to work with talented filmmakers, but in the absence of that, and if that’s not immediately available to me, I’m going to entertain people. It was a really enlightening moment, and it freed me from feeling that I was going to be stuck being branded as the comedy hack.”

Garner is not stuck in any area of his life today. He’s moving his office from Venice to the Paramount lot in central L.A. just as the ink dries on his shingle Broken Road Prods.’ first-look deal at the studio. He has 10 projects on IMDb in post or heading into production, and he’s already booked a dozen interviews for The Producer’s Guide.

The second episode, just release, features an interview with actress-producer Rebel Wilson. Up next: Neil Moritz, Michael De Luca, Isla Fisher, Marty Bowen, Al Gough, Adam Rifkin, John C. McGinley and the crew from Nobodies, Hugh Davidson, Larry Dorf and Rachel Ramras. “I’m never going to make any money doing this, but I’m learning so much,” Garner said, giving a nod to one of his wife’s notes that he needs to slow down when he talks. “It hasn’t felt like work. I would love to do it as long as [PodcastOne] wants me to do it.”

Speaking of education, Garner said he studied his favorite podcasts and favorite podcasters to get the skinny on best practices. “I love Tim Ferris and Joe Rogan and Adam Carolla,” he gushed. “Those guys are obviously gold-standard podcasts for me. I’m also really into listening to entrepreneurs talk because I consider myself an entrepreneur who launches a new start-up every year.”

As for why he launched this particular new venture with Sandler as guest No. 1, Garner said with a laugh that he “was scared shitless to do this,” and by drafting a longtime buddy, he knew he wouldn’t fail. “Adam has been so incredibly generous to me professionally and personally in my entire career, and I have such a comfort level with him. I’ve been on sets and on vacation with him, everywhere from planes to junkets. I knew that, if nothing else, I could fall back on conversations we’ve had in past.”

Even though they’ve known each other for the better part of two decades, Garner said having him on the podcast was the first time he learned Sandler’s middle name, Richard. For the record, his is Todd Patrick Garner.