The Take Back the Workplace March took place Sunday in Hollywood, with marchers traversing Hollywood Boulevard in order to bring attention to workplace harassment in the entertainment industry.

Some participants wore the pink pussy hats that were popular during the post-inauguration Women’s March, while others opted for Wonder Woman T-shirts. Street vendors on Hollywood Boulevard were selling “Me Too” and “The Future Is Female” buttons, along with the usual keychains and fidget spinners.

Hundreds turned out for the march, which was organized by comedian Tess Rafferty with the help of the Feminist Majority Foundation, Civican and We for She. The event came more than a month after reports of Weinstein’s alleged decades’ worth of sexual assault and harassment. Since then, several victims have come forward with accusations aimed at numerous industry figures, including actor Kevin Spacey and directors Brett Ratner and James Toback.

In attendance at the Sunday-morning march was Weinstein accuser Lauren Sivan, who previously alleged that the film mogul masturbated in front of her and ejaculated into a potted plant in an empty restaurant kitchen. The local Fox News reporter, who served as the celebrity chair for the march, spoke at a planned press conference outside the CNN Building.

“This is 2017, and the time is ripe for a reordering of power,” Sivan said. “You will no longer keep us quiet or label us ‘gold diggers’ or ‘psychos.’ We want our daughters and sons to be able to go to a workplace and never have to take a meeting with a dude in a bathrobe. They will never have to choose to put out or keep their job.” 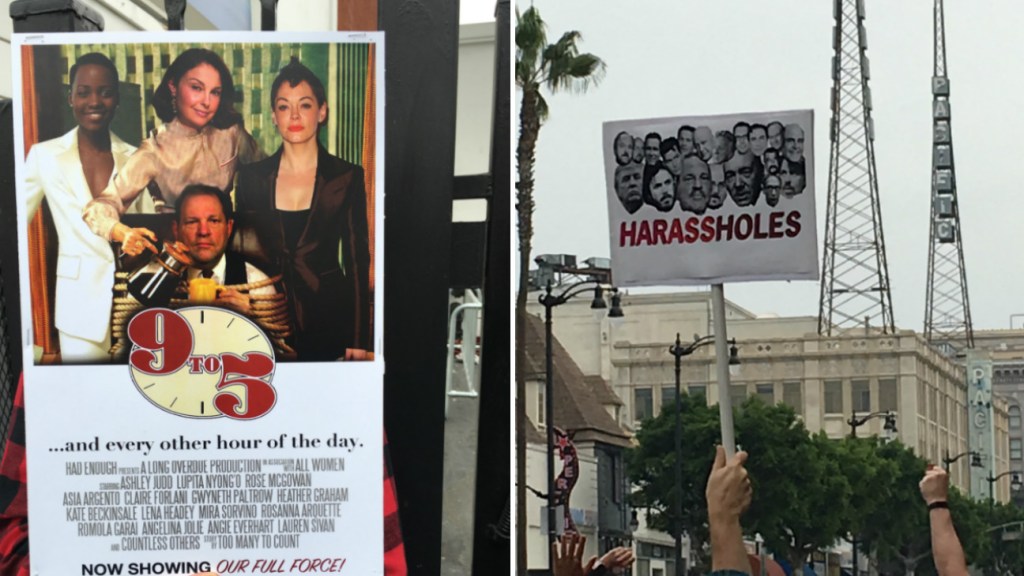 The event was combined with Sunday’s #MeToo Survivors March, which was headed by Tarana Burke, who created the hashtag that has been used by people on social media to share their personal experiences with sexual harassment or sexual assault.

After the Take Back the Workplace March finished, participants made their way back to the Hollywood & Highland complex, where a #MeToo rally was set to take place. Walking back along Hollywood Boulevard’s Walk of Fame, a woman turned to another participant and asked, “Does Harvey have a star here?” The other responded: “Yes, and I think it’s right by [Donald] Trump’s.”

A "Take Back the Workplace" March Is Happening in Hollywood