Stylist Joseph Cassell has answered fans’ calls for client Taylor Swift to wear more Versace. The singer-songwriter added some flair to her “Cruel Summer” with a vibrant Versace ensemble on Monday at the 2019 MTV Video Music Awards.

Swift, whose seventh album Lover bowed Friday, walked the red carpet in an embellished blazer with strong shoulders over a blingy pink bodysuit with thigh-high black suede Louboutin boots and green hoop earrings. The colorful pattern with a gold buckle print is reminiscent of the hibiscus print Versace romper that she donned for the Teen Choice Awards earlier this month. Swift previously wore Versace to the 2016 Grammy Awards (a coral and pink bandeau and skirt) and the 2019 Golden Globes (her slinky black “mermaid” gown).

Her VMAs blazer also had safety pins printed on it, which had some fans speculating they represented her anti-Trump sentiment, given the pins’ symbolism after the 2016 election. Swift later called on the White House to address her Equality Act petition while accepting the award for Video of the Year.

During her opening performance of “You Need to Calm Down” at the VMAs, Swift sported a gold bustier top with sparkling indigo Versace shorts, gold Louboutin boots and Kallati pink hoop earrings. She added the matching indigo Versace blazer with strong shoulders and bedazzled lapels while singing “Lover” with her pink guitar.

Last week, Swift dropped a limited-edition clothing and accessories collection with friend Stella McCartney, who is name-dropped in the new song “London Boy.” The line of hats, hoodies, bombers, water bottles and tees includes new song lyrics (“Summer’s a knife”) and pictures of Swift’s new kitten Benjamin Button. Thus it would have been natural for the performer to wear a look from the British designer to the VMAs just days after her album release.

The palette fits with Swift’s Lover era sense of style that has so far included rainbows, pastels, butterflies, sequins, dip-dyed hair and more.

Swift, who is attending the VMAs the first time since 2015, has previously worn pieces by KaufmanFranco, Dolce & Gabbana, J. Mendel, Hervé Léger by Max Azria, Mary Katrantzou and Ashish to the awards ceremony. 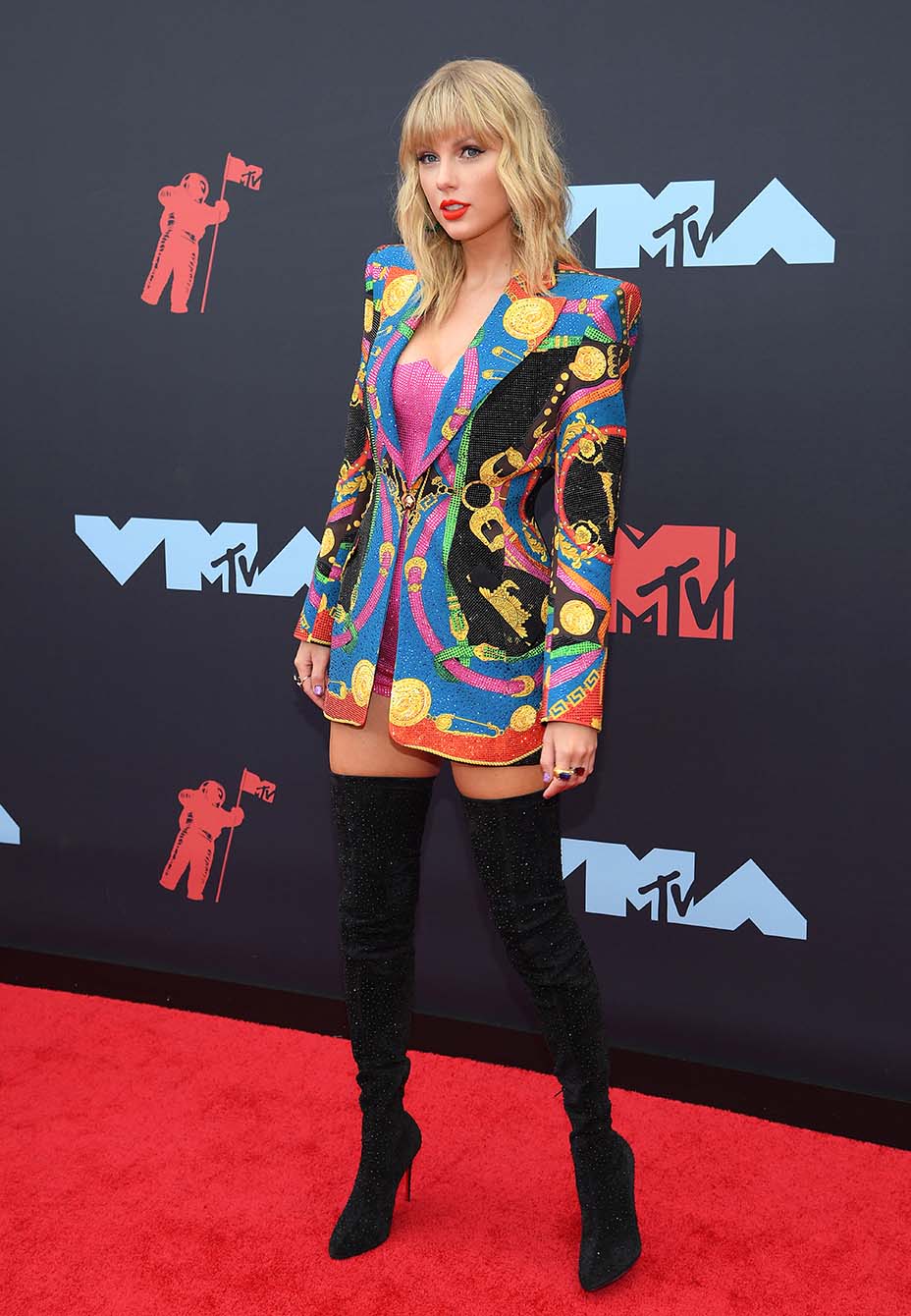